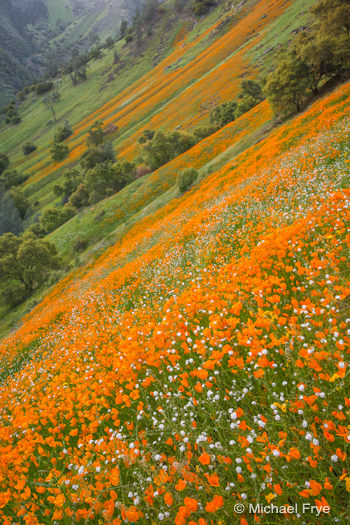 It’s turning out to be a great year for poppies in the Merced River Canyon, along Highway 140 just west of Yosemite. While nothing may ever match the spectacular poppy bloom of 2009, this season is coming pretty close. There’s a brilliant display on the north side of the canyon about three miles east of Briceburg, with poppies reaching from the river to the ridge tops. A mile or two further east, around Grandy’s Hill, you can find some great patches of flowers above the road on the south side of the canyon. And there are plenty of poppies at the beginning of the Hite’s Cove trail.

The bloom seems to be spreading from west to east, as it did in 2009. During the last week poppies have appeared in many places on the north side of the canyon from the rock-slide to El Portal, including some of the areas burned in last year’s Motor Fire. I’m hoping that this spread will continue, and we’ll see poppies blooming for two or three more weeks.

Despite the fact that this is mostly unfenced public land, and some of the best poppy displays are on the same side of the river as the highway, access to the flowers is difficult. The hillsides are extremely steep. Not fall-off-and-you’ll die steep (at least in most places), but it requires a lot of agility, stamina, and sure-footedness to climb up many of these hills, and a slip could cause injury. Most people are going to be limited to telephoto views from the road. The one spot with relatively easy access to close-up views of poppies is the beginning of the Hite’s Cove trail.

While I usually prefer soft light (shade or overcast) for flowers, poppies present a dilemma. They only open in full sunlight, so they look much more vibrant during the middle of a sunny day, when the light is harsh. So when photographing poppies you have to balance all the usual considerations about light with the need to have the flowers open.

One of the solutions is to photograph a patch of poppies just after the sun leaves them in the afternoon. I made the image above after climbing one of those typically steep canyon hillsides. The sun had just sunk behind a ridge, so most of the foreground flowers were still open, creating an ideal combination of open poppies and soft light.

Backlight can also work, with the sun shining though all those translucent orange petals from behind. Low-angle direct frontlight can also complement poppies, as it creates few shadows, emphasizing colors and color contrasts.

Meanwhile, along the river banks and creeks in this same canyon, the redbud are peaking. A few have started to leaf out, but most are in prime condition, and should be in good shape for at least another week. And the redbud are a lot easier to get close to than the poppies!

It’s unusual to see the redbud and poppies peaking together. Early April is a pretty typical time to see the redbud, but poppies usually bloom in March. We’re lucky to have such great displays of both flowers at the same time.

Just to make things interesting, of course, two storms are headed this way. The first is expected to move through tonight and tomorrow, and while the second is due to arrive Thursday night. It sounds like Yosemite Valley could get a couple inches of rain out of these two systems, and two or more feet or snow could fall in the high country. The second storm is expected to be colder, and snow could get down to Yosemite Valley by time it’s over.

It’s hard to predict what this weather will do to the poppies. In areas where they’ve already peaked they might fade quickly. But in other spots, where the poppies are just getting started, the additional moisture may actually help sustain the bloom. At least I hope so! And the new snow in the high country will certainly help keep Yosemite’s waterfalls flowing longer. 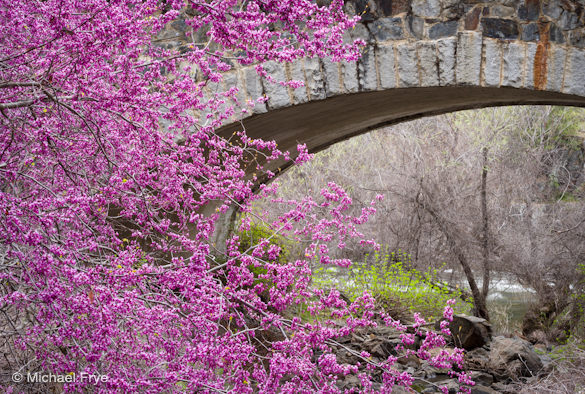