Where Should You Place the Horizon in Landscape Photographs? 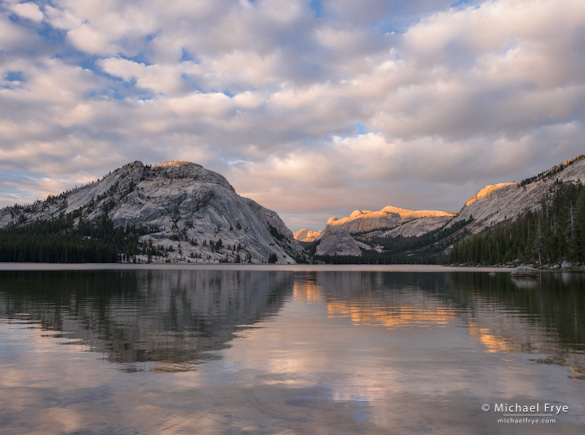 At Tenaya Lake last week my workshop student and I watched and photographed a spectacular, constantly-changing cloud display for over two hours. I made many images, including the one at the top of this post (you can see two more here and here). With the lake in the foreground every composition included a prominent horizon line, so I was often thinking about where to place the horizon in the frame.

It’s not always an easy decision. If you’ve ever read any books on composition you probably learned about the rule of thirds. And when applied to horizons this means you should place the horizon a third of the way from the top or bottom of the photograph. And you probably also read that you should, at all costs, avoid putting the horizon in the center of the frame.

As many of you already know, I’m not a big fan of the rule of thirds. It’s too restrictive, too limiting when applied to the infinite number of possible subjects and situations a photographer can encounter. It’s useful sometimes, but shouldn’t be taken as dogma. 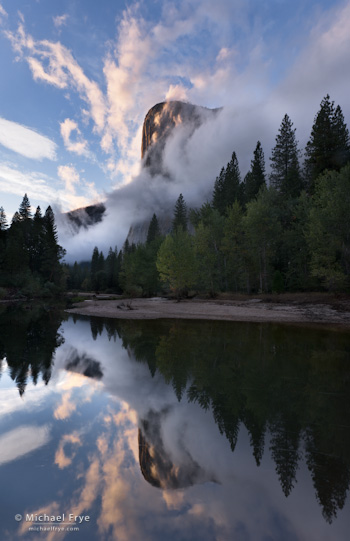 (B) Cloud formations, El Capitan and the Merced River, Yosemite

If you’re photographing a still, mirror-like reflection, a centered horizon can work quite well. The bottom half of the image mirrors the top, creating symmetry and repetition. This photograph of El Capitan, for example (B, at right), is all about symmetry. The way the bottom of the photograph mirrors the top creates the sense of lines radiating and swirling out from a central point—an effect that would be lost if I had moved the horizon off-center. (Okay, it’s slightly off-center, but only slightly.)

If you’re not dealing with a mirror reflection then centering the horizon often makes it look like you’ve stuck two different photographs together. In these non-symmetrical situations it’s usually better to point the camera up or down, even a little bit, and choose to emphasize either the sky or the foreground.

In the photograph below of Greenstone Lake (C) there was a mirror-like reflection, so I could have centered the horizon, but my lens wasn’t wide enough do that and still include enough of the clouds at the top. So I chose to point the camera up and emphasize the sky more than the reflection. The horizon happens to be about a third of the way from the bottom of the frame, but this was just where it seemed to fit, allowing me to include some breathing room above the most prominent clouds, as well as space below the reflection of the peak.

In the image of Tenaya Lake at the top of this post (A) the water wasn’t a perfect mirror, so I figured a centered horizon wouldn’t work. I liked the ripples in the water, but decided that the clouds were a little more interesting. But placing the horizon a third of the distance from the bottom of the frame wouldn’t have left much room for those beautiful reflections. In this case putting the horizon just below center seemed to strike the right balance.

Finally there’s one more example, of poppies in the Merced River Canyon (F, below), with no horizon visible. Showing the horizon would have required including a bright, washed-out sky, and that bright area would have pulled viewer’s attention away from the spectacular display of flowers. There’s no law that says you have to include a horizon at all.

So where should you put the horizon in landscape photographs? It’s really pretty simple. If you have a mirror reflection, consider putting the horizon in the center. If not, ask yourself which is more interesting—the sky or the foreground. If it’s the sky, point the camera up. If it’s the foreground, point the camera down. Let the logic and esthetics of the scene, not arbitrary rules, guide your decision. 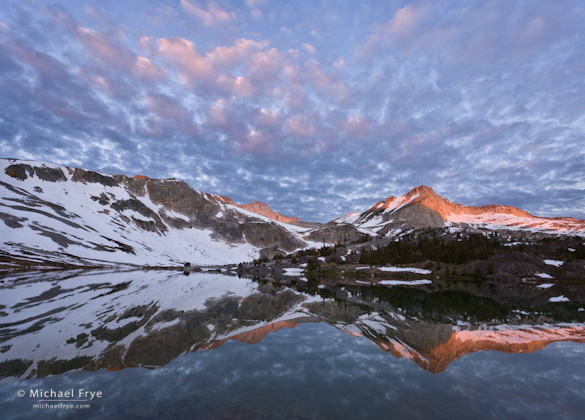 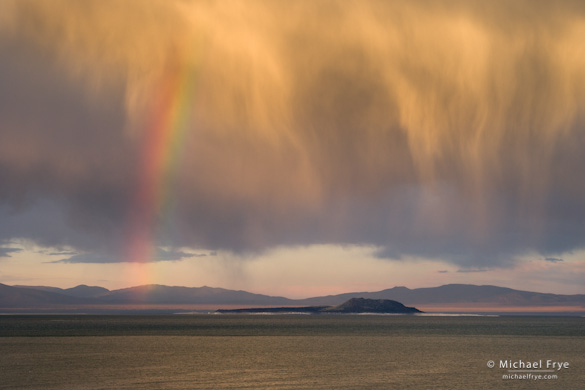 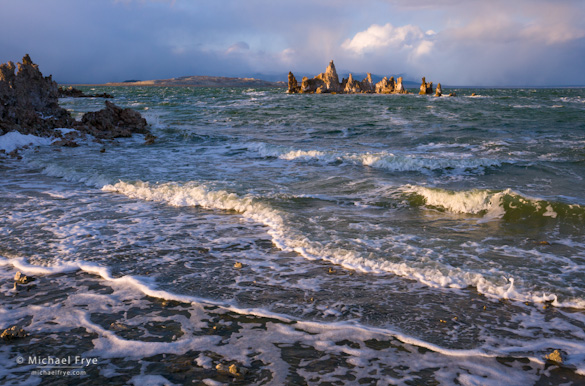 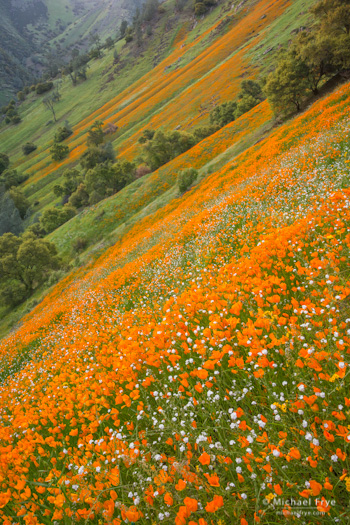 (F) Poppies and popcorn flowers in the Merced River Canyon