A Good Year for Poppies? 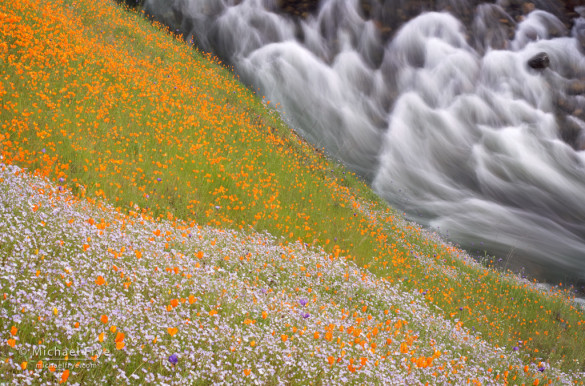 Wildflowers above the South Fork of the Merced River, March 25th, 2009

We’ve had an exceptionally dry winter, but a few well-timed storms in late February provided sufficient moisture for the poppies to start blooming in the Merced River Canyon, along Highway 140 west of Yosemite. I drove up the canyon on Wednesday and saw scattered patches of poppies. By yesterday afternoon the bloom had progressed considerably, with larger, denser swaths of orange on the hillsides.

The best poppy blooms in this area often follow dry winters. Wet winters create a thick, tall carpet of foothill grasses that crowd out the poppies, while drier conditions lead to sparser grasses and more room for poppies. The two best blooms I’ve seen, in 2009 and 2012, both occurred after below-average winter precipitation. It’s too early to tell whether this year will be that good, but the rapid spread of flowers within the last four days is a good sign. If things keep progressing the bloom could be spectacular by next weekend. Or not. I’ll keep you posted!

The best displays right now are in the usual early-season spots: along the north side of the canyon about two to four miles east of Briceburg (where the Telegraph Fire burned in 2008), on Grandy’s Hill (on the south side of the canyon about two miles west of the Ferguson rock slide detour), and near the beginning of the Hite’s Cove Trail (the trail starts at Savage’s Trading Post, about a mile east of the Ferguson rock slide). The poppies bloom on very steep hillsides, making them difficult to reach, so in most cases you’ll have to photograph them from a distance with telephoto lenses. But the Hite’s Cove Trail takes you right through a dense patch of flowers.

Meanwhile, the redbuds are starting to bloom down along the river in this same area. A few are in full bloom, some are partially out, and others are just budding. They should be beautiful in another week or two.

I give specific directions to some of the best locations for poppies and redbuds in The Photographer’s Guide to Yosemite book and iOS app. But if you just drive from Mariposa to Yosemite on Highway 140 on a sunny day you can’t miss the poppies, and the redbuds are easily visible along both sides of the river.

Around the rest of California, I’ve seen reports of a nice bloom in Saddlebag Butte State Park (east of Lancaster in the Mojave Desert), but no news of any other particularly spectacular flower displays. That could change, however, so if you’re interested in photographing flowers here are some resources for current wildflower reports. One of the best is Sandy Steinman’s blog, which has a comprehensive list of links to wildflower reports. The CalPhoto group on Yahoo is a great place to get information from other photographers. DesertUSA is another valuable site, with flower reports for Arizona, Nevada, New Mexico, and Texas as well as California. Also check out the Theodore Payne Foundation’s Wildflower Hotline.

Despite the dry conditions, I’m hoping that we might still see a few good wildflower displays this spring. Some colorful blooms could certainly help brighten the mood in this drought-stricken state.