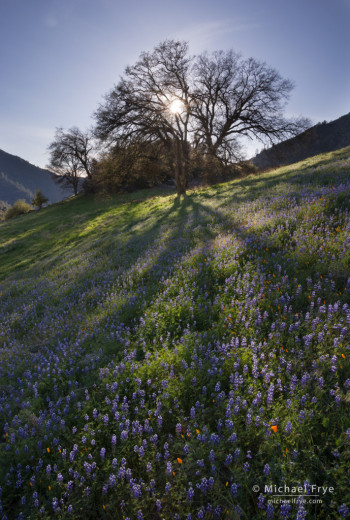 Claudia and I drove up the Merced River Canyon west of Yosemite Sunday afternoon on a scouting mission, looking for wildflowers that were rumored to be blooming. And we did find some flowers – despite our dry winter. The redbuds are coming out all along the canyon; most are just budding, but we found some in full bloom, and the rest should get there within the next week or so.

Redbuds have deep roots, so they’re not affected by drought as much as some other flowers. But the poppies in this area are annuals, and dependent on winter rains, so I was surprised to see quite a few poppies blooming up and down the canyon. The display doesn’t approach last year’s, or the even more spectacular bloom in 2009, but any flowers at all seem like a miracle after our dry winter. And who knows – maybe the show will get better.

Right now the most eye-catching hillside of poppies is about a mile east of Savage’s Trading Post on the opposite side of the river. You can reach the base of this hill by driving to the end of Incline Road and continuing on foot for about a mile down the old railroad bed. But getting up among the poppies requires climbing a very steep hillside. (There are directions to Incline Road in my Photographer’s Guide to Yosemite, which most of you probably have, but if not the road is easy to find. Just cross the bridge at Foresta Road, about four miles east of Savage’s, then turn left along the river on Incline Road.)

There are also poppies near the beginning of the Hite’s Cove Trail. This spot is a little more accessible since the trail goes right through the flowers. Claudia and I hiked up another hillside near El Portal and found a nice patch of lupine along with some scattered poppies. I made the photograph above as the sun sank behind an oak tree, casting long shadows across the field of flowers.

There’s rain in the forecast for tonight and tomorrow. It’s hard to say how that will affect the poppies. Sometimes a storm will cause the poppies to shrivel up and disappear, but since the bloom is just starting maybe the extra moisture will help.

The approaching storm is expected to be warm, so there probably won’t be any new snow in Yosemite Valley, but a clearing rainstorm can be quite beautiful too. From the forecast it looks like the storm will clear late Wednesday or Wednesday night.

Let’s hope that it turns out to be a better year for wildflowers than expected, not only in the Yosemite area but around California. If you’re looking for flowers this spring, you’ll find some useful links here.