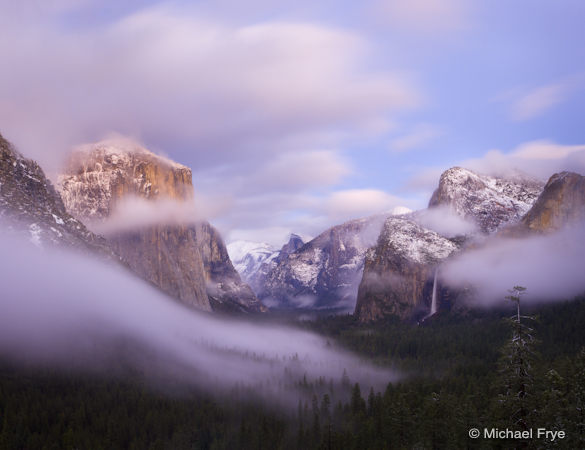 Those of you who live in California know that our two-month winter drought finally ended, with storms arriving on Friday and Sunday. Yosemite Valley received over five inches of rain total, and at higher elevations most of that precipitation fell as snow.

For photographers this meant that for the first time in months we had the opportunity to photograph clearing storms. Not only that, but both storms were considerate enough to time their clearing perfectly and break up just before sunset. 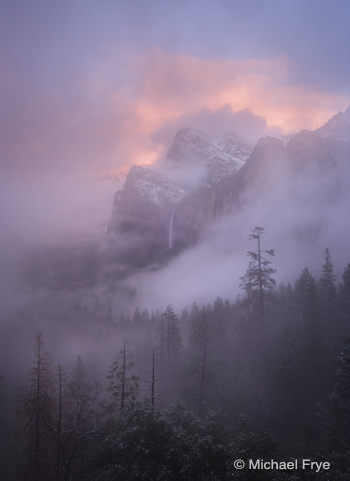 Friday night it dumped at our house in Mariposa, with strong winds driving the heavy rain sideways. A friend in Yosemite Valley told me he heard thunder that night.

Showers fell off and on most of the day Saturday, but the sun started breaking though in the afternoon, and the satellite and radar images looked promising.

I drove up to Yosemite Valley late in the day and arrived at Tunnel View just as the first patches of blue sky appeared. But just as the sun broke through a bank of fog blocked the view. Eventually the fog lifted enough to reveal a beautiful, misty scene of Bridalveil Fall with a pink cloud above Cathedral Rocks. The fog closed in again, but after sunset it cleared once more, with wonderful alpenglow illuminating the landscape. The photograph at the top of this post was made after sunset on Saturday, with a two-minute exposure to blur the motion of the clouds.

Sunday night’s storm was less intense, but seemed to clear more slowly. It continued to rain throughout the day on Monday, with no signs of sunlight or blue sky. But the forecast, along with the satellite and radar images, suggested possible clearing late in the day. I estimated there was a 20 percent chance of seeing some interesting light in Yosemite Valley that afternoon, but decided to drive up again, just in case.

It rained during the entire hour-long drive, but just as I pulled into Tunnel View I saw a small patch of blue sky overhead. On Saturday there were only two other photographers at this popular vista, but yesterday I found a workshop group there. I squeezed in between tripods, and we all waited.

Soon mist began lifting from the valley floor, and faint spots of sun hit El Capitan. The sunbeams got stronger, and then we were watching a full-blown, classic clearing storm, complete with orange and pink sunset colors.

Of course I’ve made thousands of images from Tunnel View, and on both of these evenings I could have headed to a different location. But I guess I have a bit of an obsession with Tunnel View. It is unquestionably one of the most spectacular and iconic vistas in the world, and when the weather gets interesting I can’t resist going there. It’s amazing to see how different this view can be from one day to the next, or even from minute to minute. Last night one of the workshop students walked back to her car while the light was still beautiful. The instructor (Phil Hawkins) said, “Going back already?” She answered, “I’m just waiting for it to change.” I was dumfounded. It was changing every second! I’ve been to Tunnel View hundreds of times, and this was one of the best sunsets I’d ever seen. Granted, they had been waiting there since 1:30, and I’m sure she was cold and wet, but how often do you get to witness and photograph such an event?

I’m extremely grateful that I live only an hour’s drive from this view, and have been able to photograph it under such varied weather and lighting conditions. I hope I never get tired of it. 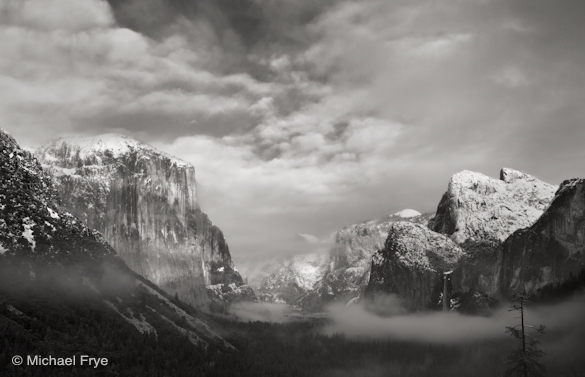 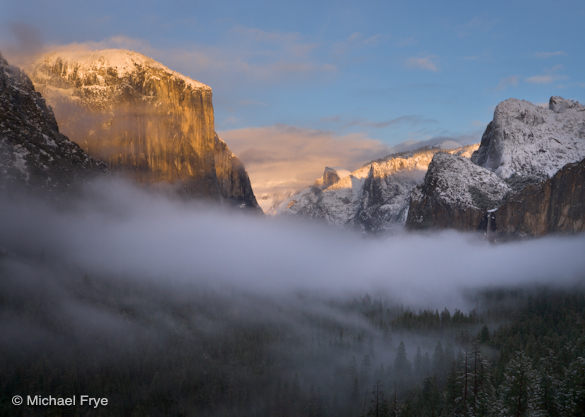 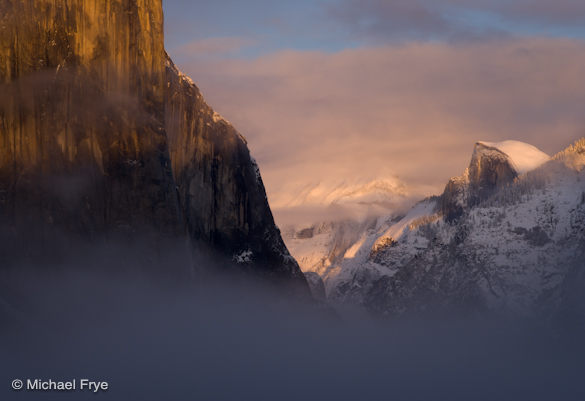 Half Dome and El Capitan at sunset from Tunnel View, Monday, 5:01 p.m. 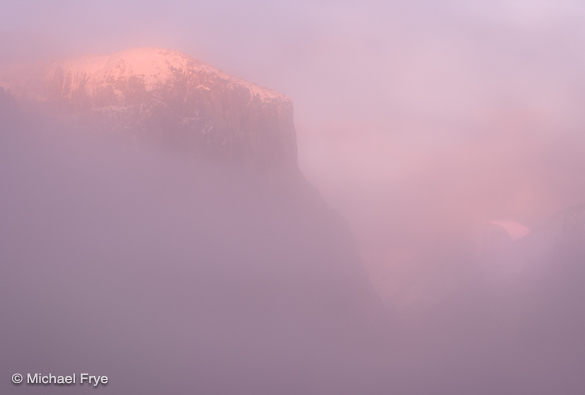 Half Dome and El Capitan through the mist at sunset, Monday, 5:11 p.m.