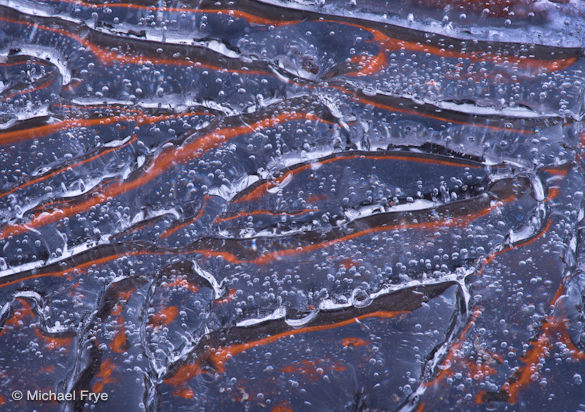 Ice with reflections of cliffs at sunset, Yosemite, January 1st, 2012

It’s been a strange winter so far in Yosemite. Actually the word “strange” doesn’t do it justice—try weird, wacky, or even freakish. No measurable precipitation has fallen in Yosemite Valley since November 20th. There’s little snow in the high country, and the Tioga and Glacier Point roads are still open. The previous record for the latest closing date for Tioga Pass was January 1st, so with every snowless day that passes we’re setting a new record. And there’s no precipitation in the forecast for the next week.

But, as always, unusual conditions bring unusual opportunities. You can find interesting ice abstracts along Bridalveil Creek and the Merced River, like the one shown above that I made a few days ago while teaching a private workshop. And we have unprecedented access to the high country in January, and a chance to make some unusual moonrise images over the next few days. 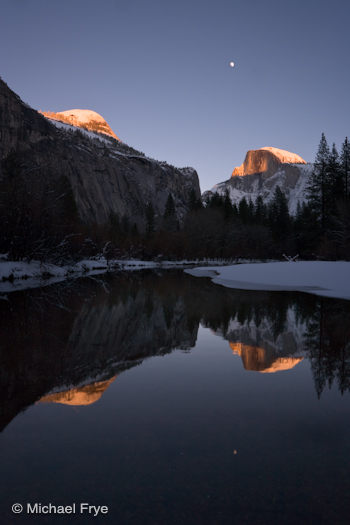 Half Dome and moon reflected in the Merced River, December 2007

In summer the full moon doesn’t rise near any Yosemite landmarks from the common vantage points. If you’re standing at Tunnel View in July, for example, the full or nearly-full moon will rise to the right, behind Cathedral Rocks or even further to the south. But in winter the full moon rises further north, and often aligns beautifully with Half Dome from many spots in Yosemite Valley, or between El Capitan and Cathedral Rocks from Valley View or Tunnel View.

Moonrise photographs usually work best one to three days before the actual full moon date. On the night of the full moon (like this Sunday), the moon rises at sunset, so by the time it ascends above cliffs and mountains of Yosemite the landscape is dark, and the contrast between the moon and everything else too extreme. But the moon rises, on average, 50 minutes later each day, so the day before the full moon it rises about 50 minutes before sunset, two days before about an hour and 40 minutes before sunset, and so on. This gives the moon a chance to ascend above the cliffs while there’s still light on the landscape—and beautiful golden light at that.

The best tool for determining the position of the moon is The Photographer’s Ephemeris, a free desktop application, or $8.99 for iPhone and iPad, or $4.99 for Android. Consulting TPE it looks like Saturday could be a good evening to catch the moonrise from Tunnel View, Glacier Point, or Mono Lake, and Sunday could also work for Mono Lake, where the horizon to the east is low enough that the moon should be visible right around sunset.

I may be at Glacier Point Saturday evening if the weather looks promising, so if you see me please say hello!

And a reminder: today is the last day to weigh in with your picks for my top images of 2011.

Michael Frye is a professional photographer specializing in landscapes and nature. He is the author and photographer of The Photographer’s Guide to Yosemite,Yosemite Meditations, and Digital Landscape Photography: In the Footsteps of Ansel Adams and the Great Masters, plus the eBook Light & Land: Landscapes in the Digital Darkroom. He has written numerous magazine articles on the art and technique of photography, and his images have been published in over thirty countries around the world. Michael has lived either in or near Yosemite National Park since 1983, currently residing just outside the park in Mariposa, California.