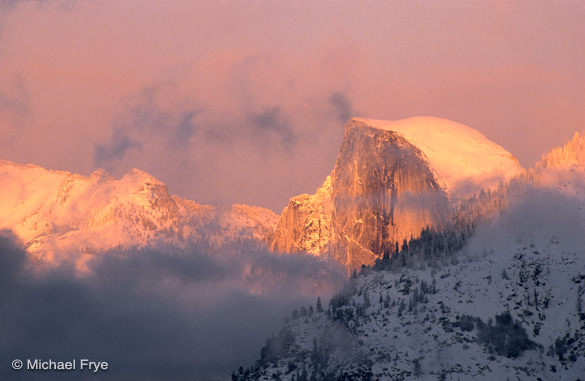 Rain reached northern California this week, but Yosemite only got brushed by the southern edge of these storms. That’s about to change, however, if the forecasts are right. The National Weather Service issued a winter storm warning for Yosemite and the southern Sierra Nevada for tonight and tomorrow, with two to three feet of snow possible above 6000 feet. The heaviest precipitation will fall as rain in Yosemite Valley (at 4000 feet), but as a cold front moves through on Saturday afternoon snow levels are expected to drop down to 2000 feet. Even though the main part of the storm will have passed by that time, forecasters are predicting plenty of showers Saturday night and Sunday, and significant amounts of snow could accumulate in Yosemite Valley and the Sierra foothills.

At this point it’s hard to predict when the storm will clear. If forced to guess, I’d say sometime on Sunday, but clearing could hold off until Sunday night or even Monday morning. Then again, a brief clearing might be possible on Saturday afternoon.

If the timing is right, this is a particularly good month to photograph a clearing storm from Tunnel View. As I point out in The Photographer’s Guide to Yosemite book and iPhone app, in March the sun hits both El Capitan and Cathedral Rocks late in the day, balancing the light on both sides of the valley.

But snow down to 2000 feet could make driving very difficult. It’s one thing to deal with snow in Yosemite Valley, it’s another to drive for 30 miles through snow before even reaching the valley, through areas that don’t typically get a lot snow and lack the equipment and personnel to plow the roads adequately. So be prepared for some serious winter driving if you’re heading to Yosemite to photograph the snow or catch the storm clearing.

We really need a month of storms to get us even close to normal precipitation for the year. Unfortunately, after this event it looks like skies will be clear next week. But I’m grateful for whatever rain or snow we get!