Courting Luck, Part 2: Adapting Your Composition to the Conditions 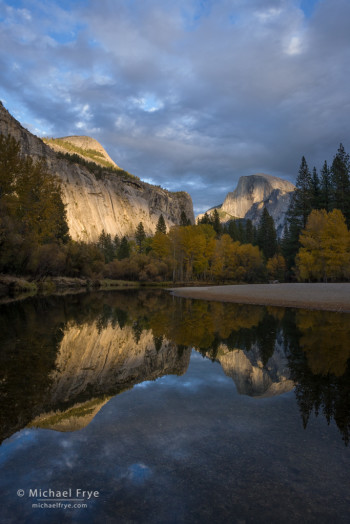 Is it better to be active or static? To change your location and composition to suit the light, or hope that the light changes to suit your composition?

There’s this persistent myth that Ansel Adams would camp for days at one spot, waiting for the right light. Ironically, this myth is often repeated in relation to Clearing Winter Storm, which was made at Tunnel View, only a few miles from his warm home and comfortable bed in Yosemite Valley. In fact Ansel wrote, “I have always been mindful of Edward Weston’s remark, ‘If I wait for something here I may lose something better over there.’ I have found that keeping on the move is generally more rewarding.”

I have also found that keeping on the move is more rewarding. I’ve sometimes regretted moving, but more often regretted staying when I ignored the inner voice that told me the light would be better elsewhere. And when I do find myself in the right place at the right time, I’ve found that it pays to stay active with my camera and my compositions, and not get lazy about changing lenses or camera positions. If I decide in advance what my composition should be, and stick with that no matter what, I’ll probably miss some great opportunities.

The sunset on Half Dome that I described in my last post is a good example. The light show lasted for about 45 minutes, and during that time I was constantly reassessing the scene and re-framing my composition to showcase the light and clouds at that particular moment. Sometimes I even moved left or right along the riverbank to change the relationship between the foreground and background.

I made the photograph at the top of this post at 4:28 p.m. At that moment the sun was illuminating Half Dome and North Dome, and some of the trees near the river were beautifully silhouetted against the sunlit cliff underneath North Dome, so I made sure my composition included all those areas, plus some of the clouds above and reflections below.

By 4:42 p.m. the sun had reached the top of Half Dome, so it seemed like a good time to zoom in a bit and include just Half Dome and its reflection. I moved left along the riverbank to line up the most colorful cottonwood trees with Half Dome, and get the foreground trees to the right of Half Dome out of the frame: 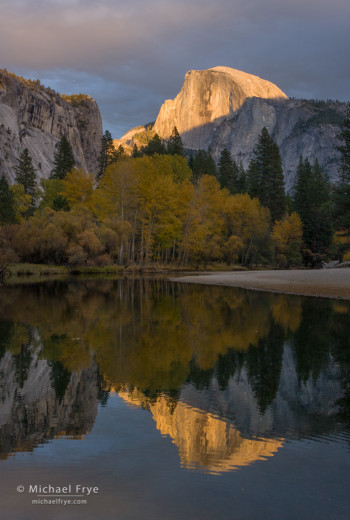 As I was taking that previous photograph, I could see that the light had returned to North Dome on the left. But from where I was then standing, North Dome was partially obscured by trees, so I scurried back to the previous spot, and framed another composition similar to the first one, except that I included some leaves along the shore in the foreground. This exposure was made one minute later, at 4:43 p.m. (this is the image from the previous post): 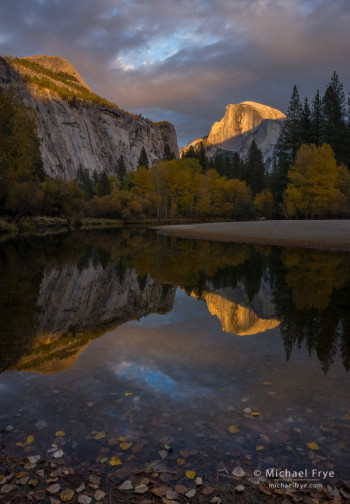 By 4:49 an interesting bank of clouds had appeared to the right of Half Dome, so I tipped the camera over into a horizontal orientation to include that cloud: 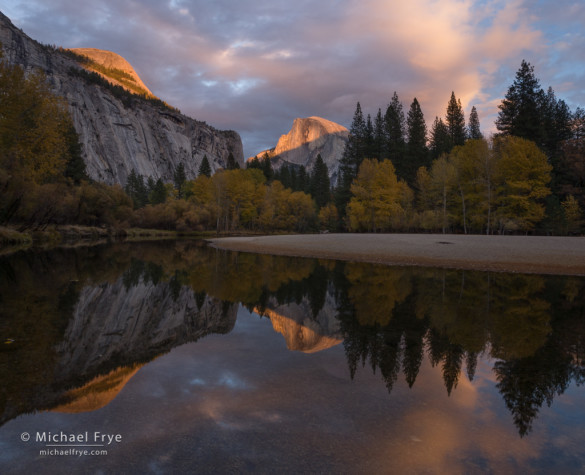 Two minutes later, with the most intense color yet on Half Dome and North Dome, I switched back to a vertical orientation: 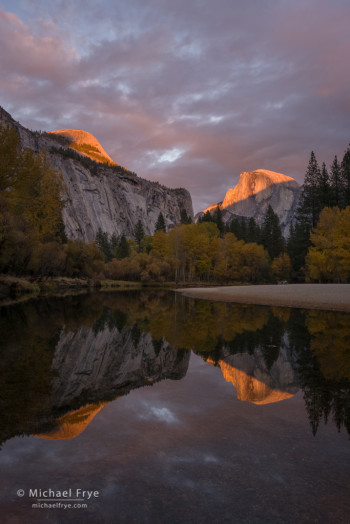 Two minutes after that, at 4:53, I zoomed out a bit to include more of the colorful cloud to the right of Half Dome: 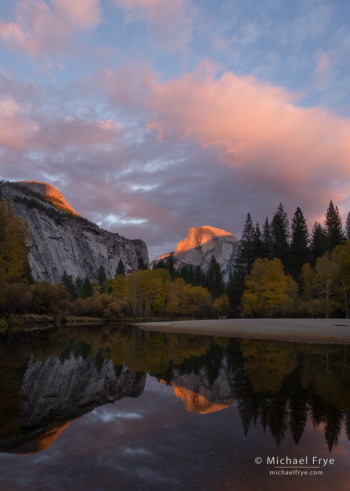 And at 4:56 p.m., just before the color started to fade, the moon popped out from behind the clouds, so I pointed the camera more to the right to include the moon and its reflection: 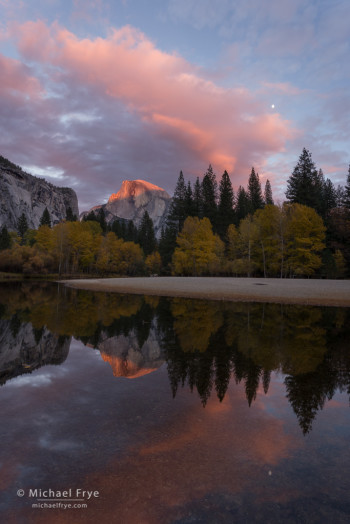 For more examples, in this post from last year I included six images from Tunnel View, made over the course of two evenings, all with different compositions.

A look at Ansel Adams’ contact sheet for Moon and Half Dome reveals that he varied his compositions, and exposures, and even turned his camera toward other subjects. If, as Ansel said, “Chance favors the prepared mind,” part of that mental preparation includes the flexibility to take advantage of special moments, and to adapt your composition to the light.

P.S. What’s been your experience—have you had better luck being active or static when the light is changing? And also, do you have a favorite from this set of images? If so, let me know.