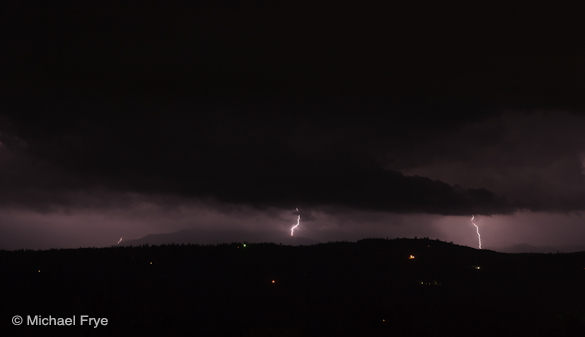 Lightning striking the Sierra foothills near Mariposa on Sunday night

October literally started with a bang, as thunderclaps rang through Yosemite Valley. It poured Saturday afternoon. Near Pohono Bridge the Merced River was brown, filled with silt, something I’ve seen only a few times in the last 27 years.

At about 11 o’clock Sunday night my wife and I got in our outdoor hot tub—a nightly ritual—and immediately noticed flashes behind the ridge to our west. We couldn’t hear anything, but knew it must be distant lightning. The frequency was impressive, a nearly constant flickering.

Even though we planned to head over Tioga Pass to Bishop the next morning, and needed to get up early, we decided to go out and take a look. We drove to a spot on Triangle Road, less than half a mile from our house in Mariposa, with a panoramic view to the south. From there we could see that flickering behind a ridge to the west, but also an even more intense thunderstorm to the south, near Fresno. This second cell put on a great light show, with nearly continuous flashes. It gradually moved closer, then slid by to the east, so we were able to watch it for over two hours.

Of course I tried to photograph the lightning, but unfortunately we saw few bolts hit the ground. Most of the show consisted of cloud-to-cloud lightning, and the streaks were usually hidden within the clouds. But I managed to capture a few good images, including the one at the top of this post. 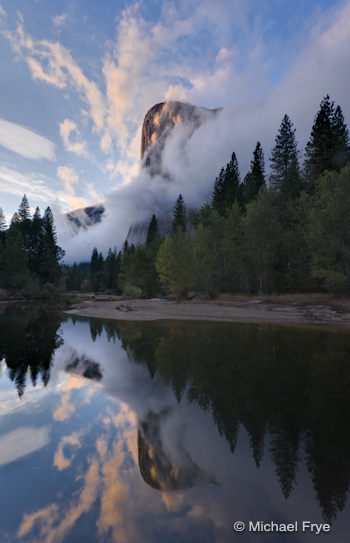 By the next morning rain had changed to snow at the higher elevations of the Sierra, and Tioga Pass was closed. We started driving north to Sonora Pass, but then learned that had closed too. Reluctantly we turned around rather than face a six or seven hour drive to Bishop.

I had to console myself by photographing a beautiful, seldom-visited location: Yosemite Valley. After receiving almost two inches of rain since Friday, skies cleared over the valley Tuesday, and I was able to photograph El Capitan at sunset surrounded by mist and clouds.

Since I never made it to the other side of the mountains, I can’t tell you first hand about the fall color over there, but Evan Russell, an Ansel Adams Gallery staff photographer and one of my workshop assistants, told me that the color is great west of Bishop around North Lake, South Lake, and Lake Sabrina. Or at least it was Monday. Tuesday it snowed up there, and many aspens lost their leaves. Typically a storm will strip most of the trees that are already turning, so it may be another week or two until the trees that are now green will change and provide another dose of fall color.

News like this—that some of the early season aspen spots may lose their leaves—often elicits anxious comments in forums, with people worried that they may have missed fall, and others adding fuel to the angst by saying that if you don’t go right now, or better still, yesterday, you’ll miss the most fantastic, wondrous, amazing fall color ever!

Let me assure you that fall isn’t over in the Sierra. Most of the aspens in classic eastern Sierra spots like McGee Creek, June Lake Loop, Lee Vining Canyon, and Lundy Canyon are still green, and probably weren’t adversely affected by the recent storms. While there are no guarantees—there are many little-understood factors that affect fall foliage—chances are good that these areas will produce wonderful color later in the month. I’ve made many of my best aspen photographs during the third week of October. Here’s one example. 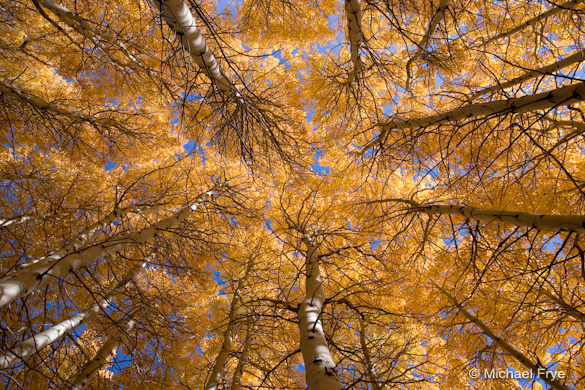 And if the aspens don’t produce more great color this year, there are always maples, dogwoods, oaks, and cottonwoods in Yosemite Valley. Peak fall foliage in the valley doesn’t usually occur until the end of October or beginning of November, but the rain and cold temperatures have set things in motion, and many maples and dogwoods have already started to change color. It looks like autumn might arrive early in the valley this year, but these things are always hard to predict.

I’m hoping to try again to get over to the east side later this week, so I’ll let you know what I find. In the mean time, a good resource for fall color reports is the Calphoto web site. Also, if you’ve been photographing aspens recently, or captured some of the storm activity in Yosemite, please use the comments to tell us what you found, and post links to photos!