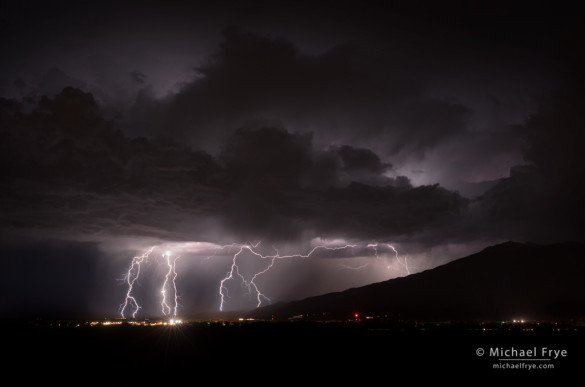 Lightning over Bishop and the Owens Valley, CA, USA

Over the weekend Claudia and I made our annual pilgrimage to the Millpond Music Festival in Bishop, over on the eastern side of the Sierra. This is the 15th consecutive year we’ve attended this festival. Hanging out with friends, listening to music underneath the high peaks of the Sierra, made for a wonderful, relaxing, fun weekend. And as a bonus, I got to photograph some interesting weather.

The land around Bishop is semi-desert, so it doesn’t get much rain. We’ve been sprinkled on a couple of times at Millpond, but had never experienced any serious rain – until Saturday.

A weak low-pressure system pulled some remnants of Hurricane Odile up from the south. Clouds and thunderstorms developed over the mountains, but missed Bishop and the Owens Valley until Saturday evening. As the second-to-last act of the day was performing, a few raindrops fell. I looked at radar images on my phone, and saw some serious-looking storm cells moving right up the valley from the south. I estimated that we had an hour or two before we got dumped on. Figuring that the last performance would be cancelled anyway, I decided to try and get some lightning photographs.

Photographing lightning is difficult. The main problem is being in the right place at the right time. You don’t want to be in the storm, as you’re likely to get wet, and risk being struck by lightning. You need to get a distant view of the storm, which means anticipating where a storm might go, finding a viewpoint, and hoping that the lightning doesn’t dissipate before everything comes together. I can’t tell you how many times I’ve set up my camera looking toward a distant storm, only to watch the lightning fizzle out.

Since the storms Saturday were coming from the south, I drove to the top of the bluff above the Owens River north of Bishop. From there I had a sweeping view of valley to the south, and the approaching storms. It seemed like a promising situation, as I could see and photograph the lightning from a long distance, and retreat to my car if a storm cell got too close. I just needed the lightning to cooperate.

And for once it did. Almost as soon as I set up my camera I recorded several dramatic bolts. Eventually I photographed three separate storms approaching Bishop. The third cell suddenly expanded as it approached, and lightning got too close for comfort, so I retreated to my car. Soon I was in a downpour, with lightning all around. But within five minutes the rain dwindled, and the lightning moved off to the north. The radar showed another cell down near Lone Pine, but it seemed to fizzle out, so I drove back to our campsite at Millpond.

My favorite photograph of the night, shown above, was from the second cell. This shows a number of lightning strikes over about a three-minute period. I made a continuous series of 20-second exposures (at f/8, 800 ISO) during that time, and blended those images together to make the final photograph.

I made nine separate exposures, instead of one long one, to avoid overexposing the lights of Bishop. With one three-minute exposure the lights and the whole foreground would have become too bright, and I would have actually gotten lens flare from the lights. By making a series of shorter exposures I could record a number of lightning strikes, but prevent the lights and foreground from becoming overexposed.

The actual blending process in Photoshop was fairly simple. I selected the images in Lightroom, then chose Photo > Edit In > Open As Layers in Photoshop. This made Photoshop stack the images as separate layers into one document. Then I just changed the blending mode of all but the bottom layer to Lighten. With the Lighten blending mode, light overrides dark. So anyplace lightning appeared in one layer it would be visible, since that lighter area would override darker areas in the other layers. But elsewhere everything would be the same. The lights of Bishop in one frame wouldn’t override the same lights from the other frames, since the brightness was the same in each layer, so there wasn’t the cumulative effect you’d get from one long exposure. In other words, the overall brightness of the final image is the brightness of one 20-second exposure at f/8, 800 ISO. Only where the lightning appeared, or where the lightning lit the clouds, did the effect become cumulative.

It turns out that Claudia and our friends had endured an adventurous evening while I was gone. While I was on the bluff, the first storm cell had passed to my west, right over Millpond. It only rained for five minutes, but that was enough to cancel the music for the evening, and send everyone scurrying back to their campsites or hotel rooms.

The last cell, however, was bigger, and accompanied by strong winds, which blew one of our friends’ tents into the creek next to our campsite. Fortunately they were able to retrieve the tent before the contents got wet. Then a sizable branch from one of the overhanging cottonwood trees fell into the middle of our campsite. Again we were lucky that no one was standing underneath the branch when it fell. Everyone waited out the storm in their cars, and after the rain and wind passed they moved the tents out into the parking areas, away from the trees. I heard the whole story when I got back to the campsite. Somehow I had managed to miss all the excitement, and everything was calm and peaceful by then.

The next morning I rose early drove up to North Lake to photograph the sunrise. The light and clouds were quite dramatic on Sunday morning; I’ll post some photos of that sunrise soon, along with an early fall-color report.

Although a few showers developed in the mountains, Bishop and Millpond stayed dry on Sunday, and we had a wonderful last day at the festival. The final performer, Mia Dyson, was great – an unknown (to us) and unexpected surprise. She brought Millpond to a rousing end as the sun set and the clouds over the mountains turned orange.