I always try to drive over Tioga Pass right after it opens in hopes of finding still-snowy peaks, and melting ice on some of the high-country lakes. This year’s big snowpack delayed the full opening of Tioga Road until July 1st, so I thought there would still be lots of snow up there. But when we drove over the pass on July 2nd we found less snow and ice than I expected. The peaks had some snow, but not as much as in 2017, and the lakes near the road were ice-free.

Later, while scouting for our high-country workshop, I did find some ice on higher lakes, away from the road. And our workshop group got to photograph a small patch of ice on one lake before it all melted. I think if we had arrived at that lake one day later the ice would have been gone.

END_OF_DOCUMENT_TOKEN_TO_BE_REPLACED 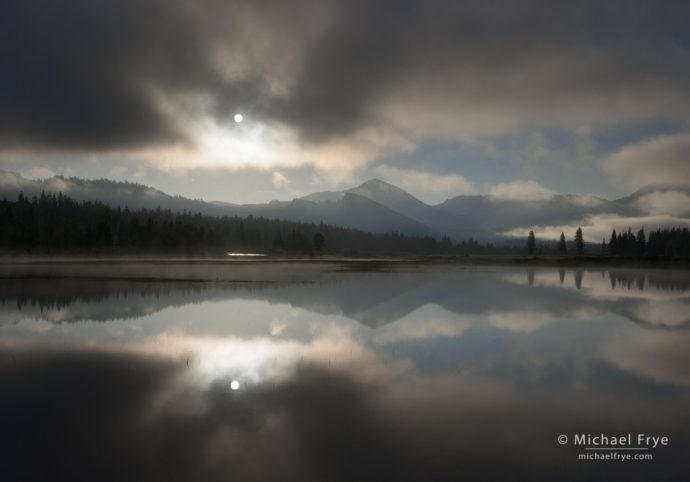 Tioga Pass will be opening fully tomorrow, July 1st – one of its latest opening dates ever. For the past week or so the pass has been open on a limited basis, from 10 to 11 a.m. and 3 to 4 p.m. each day, with no stopping or “recreating” allowed. But starting tomorrow it will be open 24 hours, with stopping and recreating – including photography! – permitted.

END_OF_DOCUMENT_TOKEN_TO_BE_REPLACED 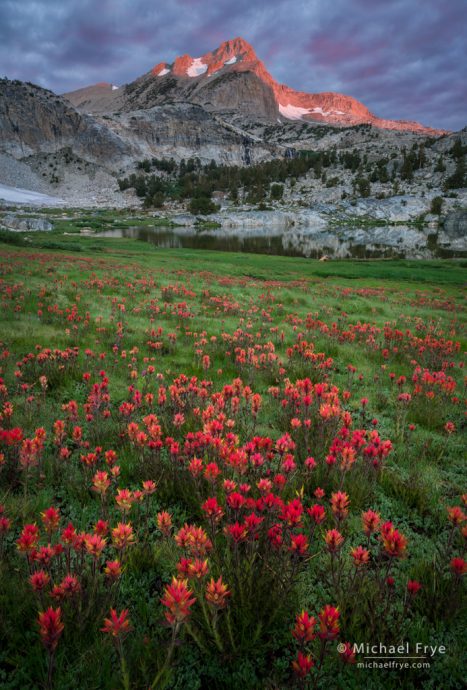 Paintbrush and peak, sunrise, Inyo NF, California. Since the closest flowers were only a foot from the camera, I used focus-stacking to get everything in focus, blending five frames with Helicon Focus. (Exposures were 1.5 seconds at f/16, ISO 100, focal length was 23mm.)

Last winter was a strange one in the Yosemite area, with most of the precipitation coming in March, followed by a big, warm rainstorm in early April that created flooding in Yosemite Valley. That rainstorm melted much of the snowpack below 9,000 feet, so spring came early in those low- and mid-elevation areas. We found some nice flower displays at those elevations, but nothing exceptional.

Above 9,000 feet, however, the snowpack remained intact, even after the early-April flood. And that lingering snow led to an exceptional bloom in the highest elevations. Back in July, before the fires, Claudia and I photographed the flowers as much as we could, and we also led our Range of Light workshop group to a couple of our favorite flower spots.

END_OF_DOCUMENT_TOKEN_TO_BE_REPLACED

by Michael Frye | May 6, 2018 | Light and Weather, Yosemite Photo Conditions 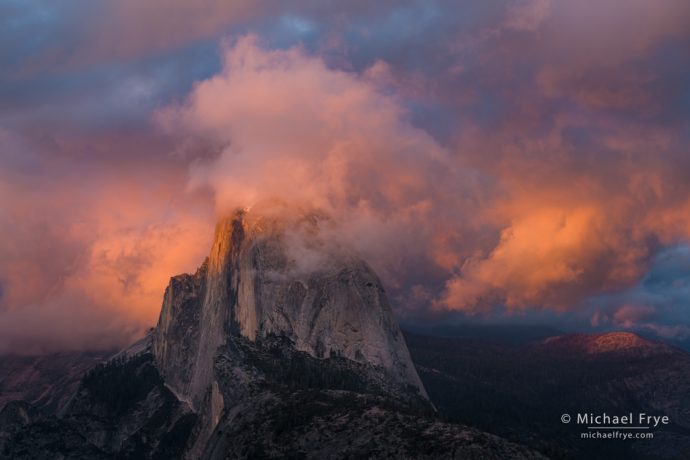 Half Dome and clouds at sunset from Glacier Point, Yosemite (7:44 p.m.)

On Wednesday afternoon I finished writing a post about the dogwoods, and then decided to look at the Yosemite webcams. The forecast called for a chance of showers and thunderstorms over the high country, and sure enough, the webcams showed some cloud buildup. I called the Yosemite road and weather number (209-372-0200), and lo and behold, the Glacier Point Road was open! At this point it was already 4:30 in the afternoon, but the sun wouldn’t set until 7:50, so there might still be enough time to get up to Glacier Point. I told Claudia the Glacier Point Road was open, and she didn’t hesitate: “Let’s go!”