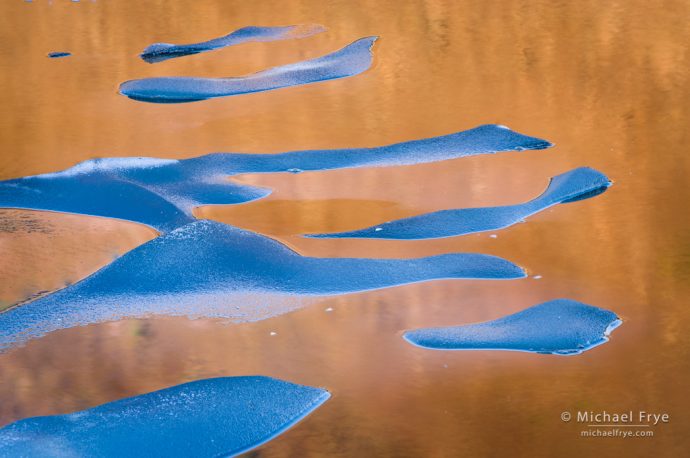 I always try to drive over Tioga Pass right after it opens in hopes of finding still-snowy peaks, and melting ice on some of the high-country lakes. This year’s big snowpack delayed the full opening of Tioga Road until July 1st, so I thought there would still be lots of snow up there. But when we drove over the pass on July 2nd we found less snow and ice than I expected. The peaks had some snow, but not as much as in 2017, and the lakes near the road were ice-free.

Later, while scouting for our high-country workshop, I did find some ice on higher lakes, away from the road. And our workshop group got to photograph a small patch of ice on one lake before it all melted. I think if we had arrived at that lake one day later the ice would have been gone.

This late-spring or early-summer ice on mountain lakes isn’t the kind of crystalline ice you’d find covering a pond in winter. It’s actually snow that has accumulated on top of a frozen lake, then melted, and frozen, and melted again, and frozen again, over and over. This melt-freeze cycle eventually turns the snow into ice. But since dirtier patches of snow absorb more heat, they melt faster. This uneven melting forms hummocks and swales, which, when they finally settle into the surrounding water, create beautiful, sculpted patterns, with peninsulas of ice divided by fiords of water, and tiny ponds surrounded by miniature snow mountains.

Photographing this melting ice can be a lot of fun. Like sand dunes, the subjects naturally form interesting, sculptural patterns. The ice can be used as a foreground for a mountain scene, but I usually prefer to use telephoto lenses and pick out abstract patterns of ice and water. And I think these ice formations become especially photogenic when they’re in the shade, but the surrounding water reflects color from a mountain catching late-day sun, or clouds at sunset.

Here are a few examples I made earlier this month while scouting for our workshop, or during the workshop itself. All are telephoto abstracts, and, since I was using a long lens raking across a level surface, the depth of field was extreme, so in most cases I used focus stacking to get everything in focus.

The ice has all melted by now, but there’s always next year! And the flowers are starting to bloom in the high country, so there are always plenty of subjects to keep me occupied. 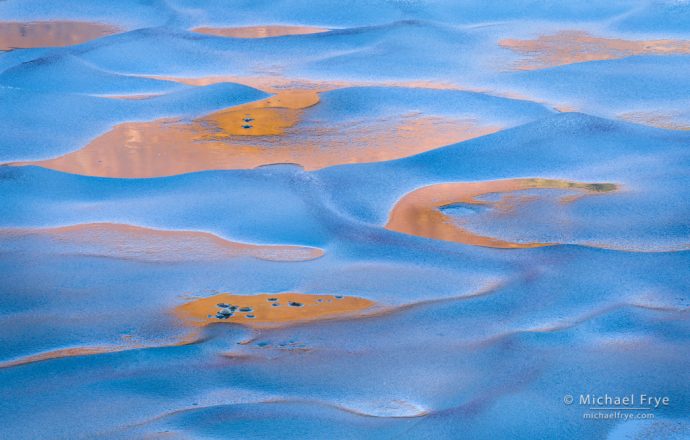 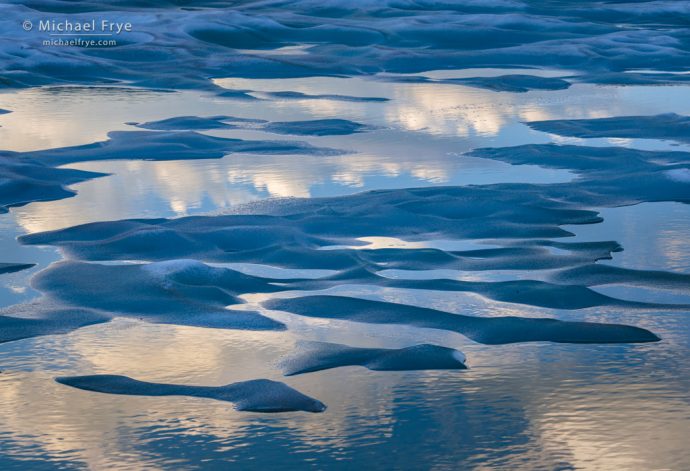 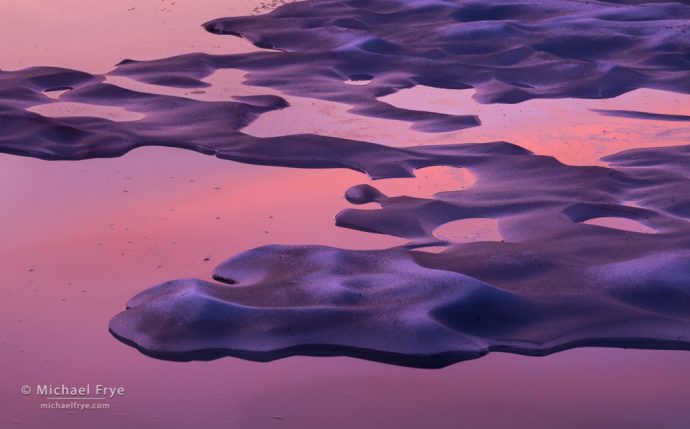 Related Posts: The Range of Light; Over the Pass; Deep Freeze in the High Country