Of course most of the precipitation fell as snow in the higher elevations of the Sierra. The National Weather Service predicted the snow level would be at about 4,500 to 5,000 feet through most of this storm, but in Yosemite Valley, at 4,000 feet, the temperature never got above 33 degrees (about .5 Celsius), so it all fell as snow – albeit wet snow. I’m not sure what the total snow accumulation was in the Valley, because I haven’t been able to get up there; from what I can gather it was between one and two feet. But the weight of all that wet, waterlogged snow brought down numerous trees and limbs. At one point the park issued a shelter-in-place order for employees and residents due to the danger of falling branches.

In the Yosemite high country, the winter rangers stationed in Tuolumne Meadows measured 82 inches of new snow. Over on the eastern side of the Sierra, the upper part of Mammoth Mountain received 113 inches of snow during the storm. And Highway 395 between Bishop and the Nevada state line was closed for at least 36 hours because of blizzard conditions.

Since Yosemite was closed, I thought about other locations I could photograph when the storm started clearing. As the end of the storm approached on Friday morning I headed for one of those locations – a higher-elevation spot that I was sure would have a good amount of snow – only to find that the road was blocked by PG&E crews working on a power line!

Now what? Time for plan… C? I decided to check out another area that I thought would have snow, even though it isn’t quite as high. I found about seven inches on the ground, and better yet, fog. So I spent a couple of enjoyable hours walking along unplowed back roads photographing snowy trees in the fog, and I’ve included a few of those images here.

Another storm is expected on Tuesday and Wednesday, but this one will be much smaller, and warmer. All the precipitation should fall as rain in Yosemite Valley, except for perhaps a slight dusting of snow when temperatures dip at the tail end of the storm.

And after that… dry. This storm was a big help, but we need more rain and snow. Let’s hope the wet pattern returns later in February! 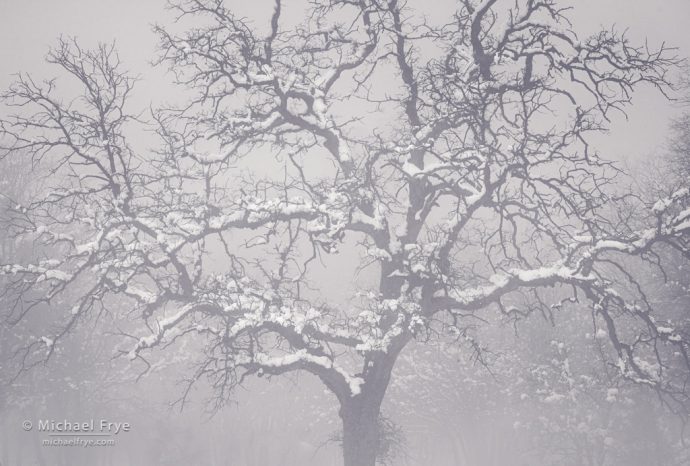 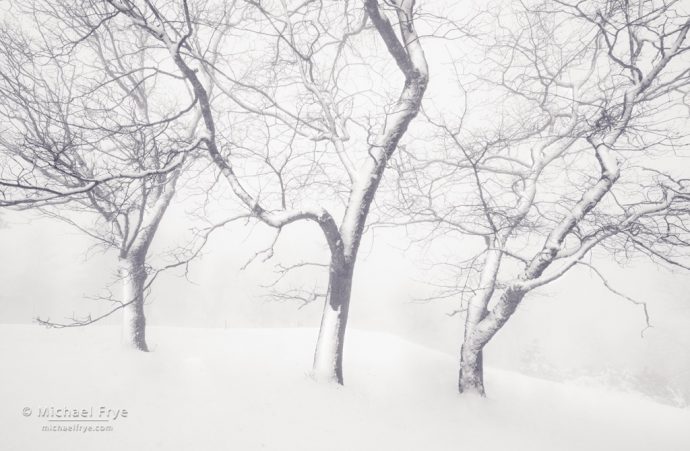 Related Posts: Riding Out the Storms; A Monster Storm