I knew it would be hot. It was July, after all, and Death Valley is perhaps the hottest place on earth. But I was actually lucky; summer temperatures in Death Valley often climb above 120 degrees Fahrenheit, while the high temp on the day I was there was only 113. Practically a cold snap.

What was I doing in Death Valley in July? Photographing Comet NEOWISE of course. I know the internet has been flooded by comet images lately, but I totally get it. The last really photogenic comet visible in the northern hemisphere was Hale-Bopp in 1997. Who knows when we’ll see another one?

END_OF_DOCUMENT_TOKEN_TO_BE_REPLACED 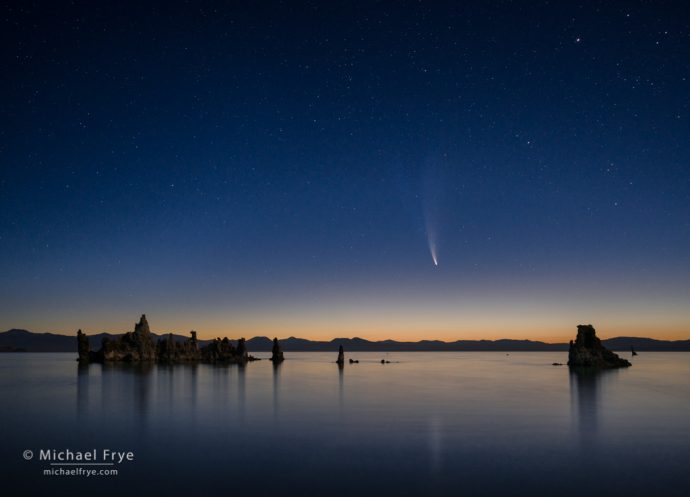 Early this morning Claudia and I joined about a dozen other photographers along the shore of Mono Lake to photograph Comet NEOWISE.

I was expecting to search for a smudge in the sky to the northeast, and use a long lens to make the comet a prominent part of the photograph. But when I stepped out of the car I could see it right away – even before my eyes adjusted to the dark. It was bigger than I expected. It’s the brightest, largest comet I’ve seen since Hale-Bopp in 1997.

END_OF_DOCUMENT_TOKEN_TO_BE_REPLACED

From the Archives: Footprints on Sand Dune

This photograph is from October of 1995 – deep in the archives.

Most of my photographic ideas arise spontaneously, as I react to the light, weather, and my surroundings. But sometimes an idea pops into my head at home, or while driving, or, especially, while falling asleep.

The idea for this footprint image was one of those occasions when an idea just popped into my head, though I don’t remember exactly where or when. I had been experimenting with light painting at dusk and at night, using flash and flashlights, and somewhere during that time I thought, “Wouldn’t it be cool to show a line of footprints on a sand dune, and use a flashlight to make the prints glow?”

END_OF_DOCUMENT_TOKEN_TO_BE_REPLACED

I’m not sure who decided that the winter solstice should be the first official day of winter, but I think that official designation is rather absurd. Winter has definitely arrived in many parts of the country, whether it’s official or not, including here in the Sierra. This past week Yosemite got its first precipitation in months, in the form of a cold storm that dropped over a foot of snow on the valley floor.

The snow began on Tuesday, and I kept my eye on the weather, of course, hoping to photograph the storm clearing, and looking for potential rifts in the clouds. Judging by satellite images, some stars might have appeared during the wee hours of Wednesday morning, but that was just a brief break before the clouds closed in again. Late Friday morning the sun finally started to poke through the clouds, so Claudia and I headed up to the valley.

END_OF_DOCUMENT_TOKEN_TO_BE_REPLACED

Old truck and shed underneath the Milky Way, Bodie. Nighttime photography can get pretty complex, often requiring multiple frames to reduce noise, or create intricate lighting. Here I captured twelve frames of the Milky Way, and blended them together with Starry Landscape Stacker to reduce noise. Then I took that image into Photoshop, where I blended it with seven light-painting frames – the truck from two sides, the shed from two sides, a frame for the interior lights (small lights placed inside the shed and against the truck windows), and two frames for lighting the headlights.

On Thursday I had an opportunity to photograph Bodie at night. I’ve done that many times before, but always while leading a workshop group. This time I joined a small group of photographers on my friend Rick Whitacre‘s permit, and the five of us had this amazing ghost town to ourselves for an evening.

It’s always fun leading a group in Bodie, but it was nice, for a change, to just concentrate on my own photography. I had a mental checklist of images I hadn’t been able to try yet, and this was the perfect chance to do that. We also had a couple hours of daylight to scout, and I found several new possibilities. The most intriguing of these, to me, was a star-trail image of wagons in an old barn, which I ended up trying – it’s the first image below.