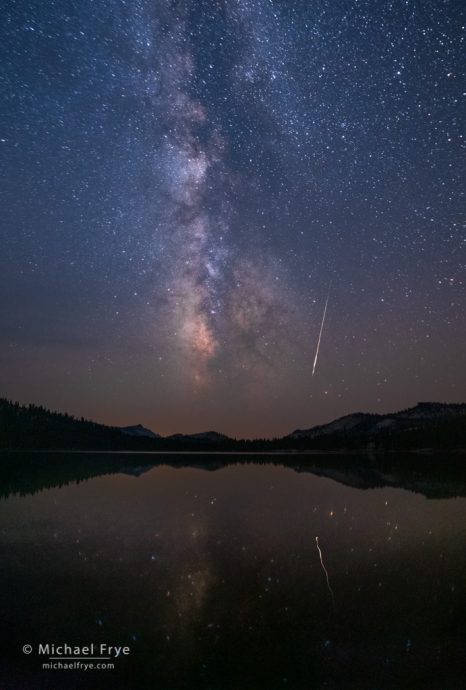 Meanwhile, my camera was taking a continuous series of 30-second exposures. I was hoping to catch a meteor in one of them, but I had pointed the camera toward the horizon to include the Milky Way and its reflection, and the earth-grazers were directly overhead. Periodically I would stop my sequence of exposures to adjust my composition as the Milky Way moved, and check to see if I had caught a meteor in one of the frames. I could see the tail-end of a meteor at the top of one image, but that was it.

Eventually we decided to pack up and make the long, two-hour drive home. Only later, when looking through the images on a large screen, did I find that I had captured a big, bright meteor, and its reflection, in a perfect position just right of the Milky Way, in my second-to-last frame. Neither Claudia nor I had seen this meteor, probably because we had already started packing up and weren’t looking at the sky. Sometimes you need a little luck.

And although we didn’t see many meteors, we saw a few bright ones, and got to lay out along the shore of a mountain lake on a serenely-beautiful evening. Not a bad night’s work.

Related Posts: Moonlight, Stars, and Meteors; A Night in the Alabama Hills