Comet Over an Alpine Lake

The Big Dipper and Comet NEOWISE over an alpine lake, Yosemite. 9 frames blended with Starry Landscape Stacker to reduce noise, each at 15 seconds, f/1.8, ISO 6400. I also made a lighter exposure for the landscape at 2 minutes and f/1.8, ISO 6400, and blended that with the other frames in Photoshop. All that was done just to reduce noise. The camera was locked on a tripod throughout that process, and nothing was stretched, distorted, or added. In other words, the comet and stars really were there, in that exact position over the lake and peak, at 11:06 p.m. on July 18th.

Before my journey to Death Valley, Claudia and I made a couple of trips to the Yosemite high country to try to photograph Comet NEOWISE.

On our first attempt we hiked to a high, alpine lake where I thought we could get a good view of the comet. It was one of those summer days in the Sierra with lots of clouds building up and forming scattered thunderstorms. I knew the clouds might interfere with comet viewing, but with that weather pattern the clouds usually dissipate quickly after sunset, so it seemed worth a try. And maybe the clouds would give us an interesting sunset.

We felt some raindrops during the hike up, and when we arrived at the lake we saw dark storm clouds to the southeast, accompanied by rumbles of thunder. I wanted to go to the other side of the lake, but there were fewer sheltering trees over there, so we decided to wait a bit and see what happened.

It started to rain harder. The thunder became more frequent. We took shelter under some dense trees next to a boulder and waited. Claudia took a nap, using her daypack as a pillow. A couple of times the sun broke through, and I ran out to look for a rainbow, but no rainbow appeared.

Finally the rain stopped, and we moved to the other side of the lake just in time to catch the sun setting behind a ridge. The lake was perfectly, magically calm: 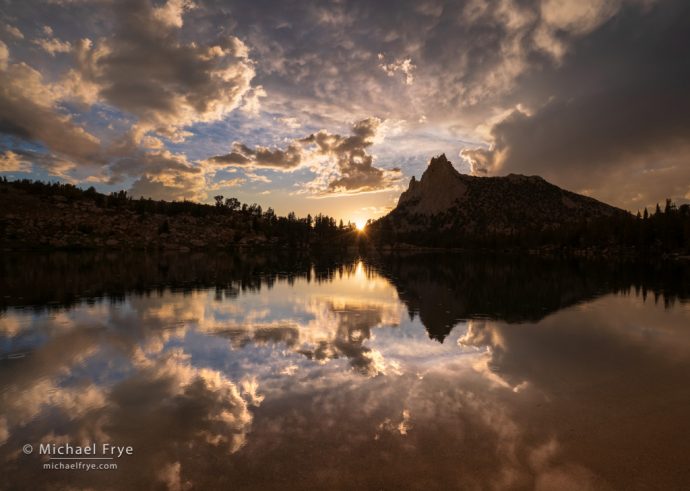 The show was just getting started, and soon the clouds turned orange. My 16mm lens wasn’t wide enough to include everything, so I stitched four frames together to get this view: 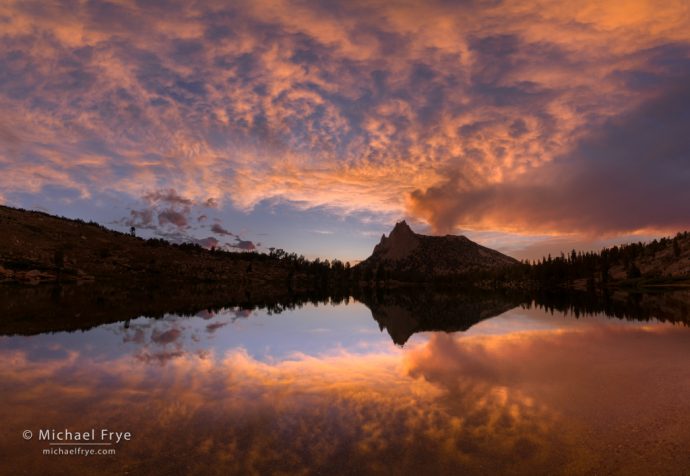 Sunset over an alpine lake, Yosemite. This is a stitched panorama (four frames), plus an HDR Merge (three bracketed exposure for each stitched image). The original frames were at 16mm, f/11, ISO 250.

Eventually the sunset faded, and the clouds started to dissipate, as we hoped they would. But one bank of clouds lingered in just the wrong spot, right where the comet should appear. An hour and fifteen minutes after sunset I thought it should be dark enough to see the comet, but we couldn’t spot it. We thought there must be clouds in the way.

I decided to move. I hiked as fast as I could back around the lake, and up toward the base of a ridge where I thought I could juxtapose the comet with a jagged peak. Since there were fewer clouds in that direction, I thought that view might work.

And sure enough, I did finally spot the comet – only to realize that I needed to move higher up the ridge, and further right. I hustled in that direction, found a spot, and – completely out of breath – composed, and focused.

For this composition I used my 70-200mm zoom, wide open a f/4. The focal length was about 100mm, so that meant I needed to use very short exposures to avoid turning the stars and comet into streaks – no more than four seconds. At four seconds and f/4, in almost complete darkness, that meant cranking the ISO up to 25,600 to get a bright enough exposure. Yikes!

But I figured that blending frames together with Starry Landscape Stacker might reduce the noise sufficiently, even at ISO 25,600. I blended 22 frames to get this final image, and it’s actually pretty clean: 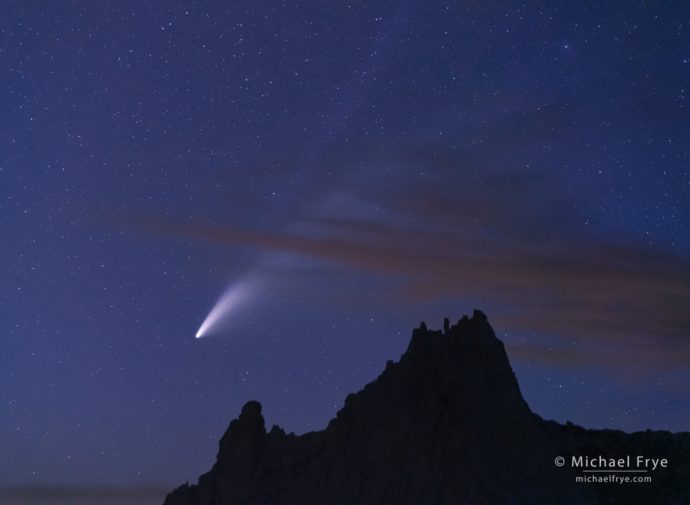 Meanwhile, Claudia radioed me and said that she could see the comet from the lake. Darn – maybe I should have stayed! So I hurried back around the lake (almost missing the trail in the dark), climbed up the hill behind the lake, and captured some frames of that scene. But by then the comet was too low.

We hiked down by the light of our headlamps, reaching our car around 12:30, and pulling into our driveway just before 3:00 a.m. Even though I didn’t get the comet-and-lake image I’d envisioned, we had a fun adventure, and saw a beautiful sunset.

And I was already thinking about trying again. A few days later the cloud forecast looked more favorable, so we made the same drive and hike. There were some clouds, but not as many. Then, just as it got dark enough, the breeze picked up, ruffling the water and killing the reflections. And then a bank of clouds moved in from the right, blocking the view of the comet. Frustrating!

But the wind died down, and the bank of clouds gradually moved past the comet and dissipated. I framed several compositions from the lakeshore, then climbed up the hill behind the lake to get a higher view. It was one of these later images that I ended up liking the best, with the Big Dipper and comet hanging above the lake and peak – the image at the top of this post.

This time we got home even later: 3:30 a.m. But it was another fun adventure, and I was thankful that I’d been able to capture the comet image I had envisioned.