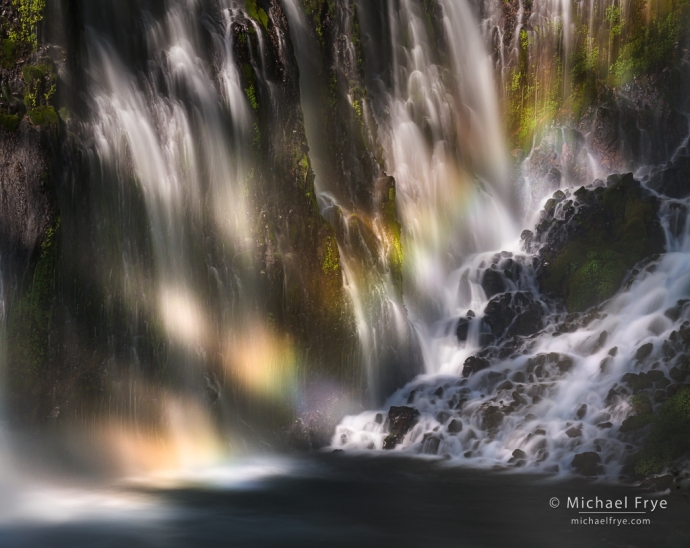 Tree shadows, rainbow, and waterfall, California. Claudia and I photographed this waterfall in soft light the evening before, but I came back the next morning hoping to see tree shadows when the sun got high enough. And sure enough, eventually trees cast beautiful striped shadows across the fall, creating a sunbeam-like effect. But I didn’t expect to also see a rainbow interspersed with the tree shadows – a nice bonus. I used a telephoto lens to fill the frame with the most eye-catching part of the scene, a polarizer to enhance the rainbow, and a neutral-density filter to slow down the shutter speed and give the water a soft, silky appearance. 135mm, 3 seconds at f/16, ISO 100, polarizer, ND filter (probably a 7-stop filter).

I love waterfalls. Who doesn’t? Besides their beauty, large waterfalls cast negative ions into the air, and negative ions supposedly have health benefits – making people feel refreshed and renewed, helping regulate sleep patterns and mood, reducing stress, and boosting the immune system. Or not; the scientific evidence is mixed at best. But whatever the reason, people seem magnetically drawn to waterfalls.

And of course waterfalls are quite photogenic. Over the past year I’ve had the opportunity to visit several waterfalls I’ve never photographed before. And while soft light usually works for waterfalls, I tried to seek out more unusual lighting conditions that could give the photographs a different look and feeling. That meant using sunlight, but waterfalls usually reside in basins and canyons, so they don’t often get that warm, low-angle light that we’re often looking for. And when the sun does get high enough to strike the fall, it’s often filtered through trees, creating splotchy light. Splotchy light can be harsh and downright awful, but sometimes, under the right circumstances, it can work. And – again, under the right circumstances – backlight can highlight a waterfall’s spray. And while front light is usually flat and boring, with waterfalls it can create rainbows.

So here’s a mini-portfolio of waterfall images I’ve made recently, with extended captions to explain how I tried to use different varieties of sunlight for each situation. 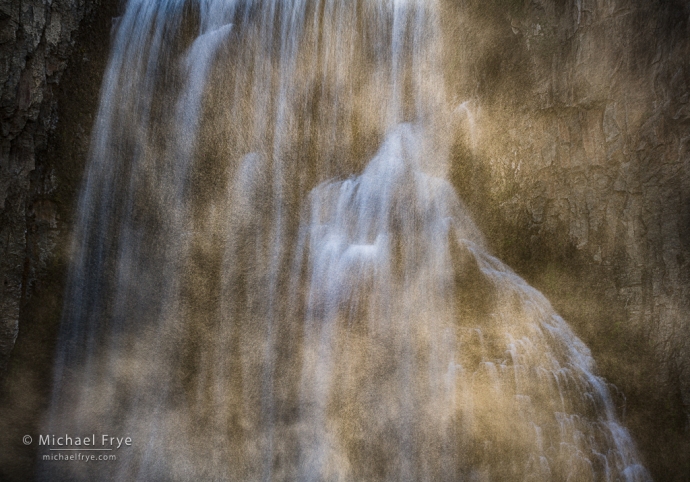 Waterfall with backlit spray, Sierra Nevada, California. Claudia and I hiked to this waterfall early in the morning, and the light was so-so at first. But as the sun rose higher it backlit the spray kicking up from the base of the waterfall, creating beautiful amber-colored veils of mist in front of the fall. I experimented with different shutter speeds, eventually settling on 1/6 sec. to create some blurring and sense of motion, while preserving some of the texture of the spray. 81mm, 1/6 sec. at f/16, ISO 200, polarizer. 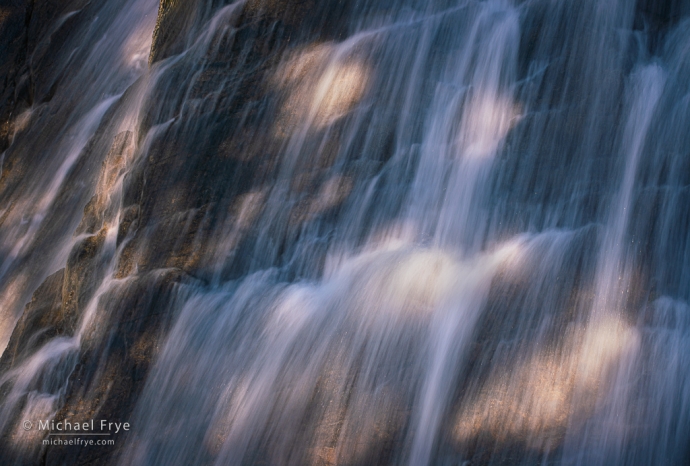 Dappled light on a waterfall, Sierra Nevada, California. I posted this photo after our pack trip into the Sierra backcountry this summer, but I’ve included it again here because it’s a good example of working with different kinds of light on waterfalls. Franka Gabler and I were heading back to camp after sunrise, and decided to check out this waterfall, where we found some beautiful, dappled light on one section of the fall. This kind of light can look harsh and awful, but here the spots of light had a nice, fairly-even pattern we thought could work. The light was, of course, shifting and changing as the sun moved, so I had to keep adapting my composition accordingly. I tried to find moments where the sun was hitting something interesting, like the little ledge just right of center in this photo, and also tried to avoid having bright spots touch the edge of the frame, where they would pull the eye out of the picture. (This is the composition I liked best; you can see one of Franka’s versions here.) Again, I had to experiment to find the right shutter speed, and settled, again, on 1/6 sec. I used a polarizer to cut glare and reflections on the wet rock, but can’t remember whether I used a neutral-density filter. 94mm, 1/6 sec. at f/16, ISO 100, polarizer. 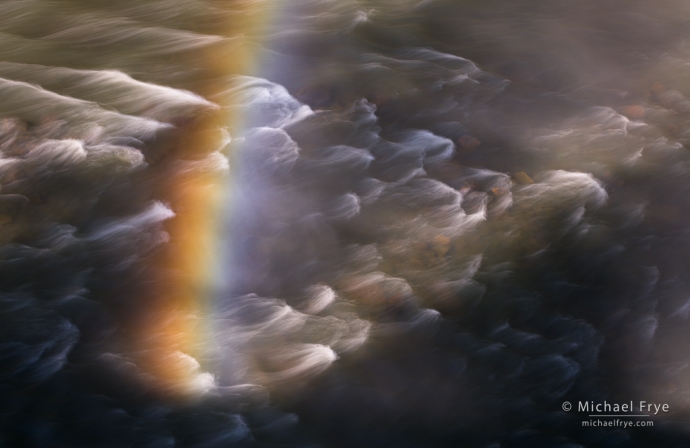 Rainbow and rapids below a waterfall, Idaho. Technically this isn’t a photograph of a waterfall, but the rainbow was created by the spray of a waterfall, so that counts, right? I visited this waterfall in the morning, hoping, again, to see some tree shadows, or a rainbow. The tree shadows didn’t materialize, and while I did see a rainbow, it didn’t line up well with the waterfall itself. However, if I moved around I could position the rainbow against a nice pattern of waves in the rapids below the fall. After some experimentation I settled on a shutter speed of 1 second to give the rapids a decent blur (but not too much), and used a polarizer to enhance the rainbow. The rainbow waxed and waned as the wind blew the spray around, but at times the rainbows was quite vivid, so I timed my exposures accordingly. 87mm, 1 second at f/13, ISO 100, polarizer, 4-stop ND filter.

Related Posts: Into the High Sierra: After the Storm; Elements Magazine Celebrates Printmaking