Into the High Sierra: After the Storm 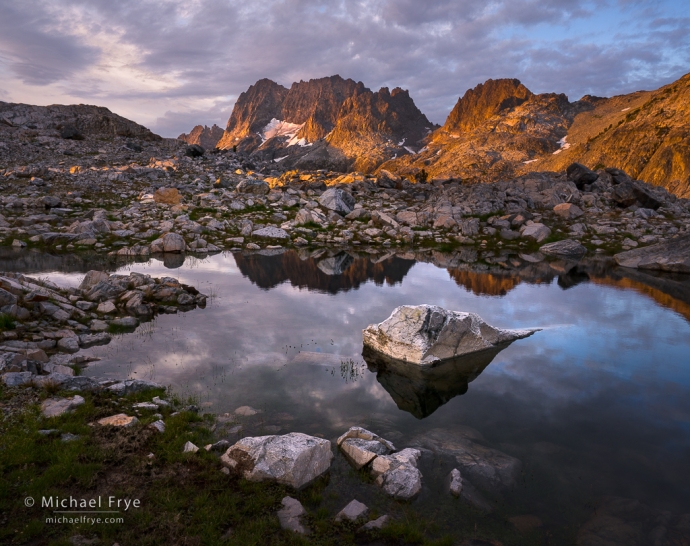 After all the rain and flooding on the first two days of our pack trip into the high Sierra, the third day brought clear skies and sunshine – and an opportunity to dry our wet clothes, sleeping bags, and anything else that had gotten damp.

It threatened to rain almost every afternoon thereafter, but never did. All we got was a brief shower one morning (more about that in a later post). But we did see lots of interesting clouds. And the deluge on our first day filled all the creeks, cascades, and tarns. Everything seemed lush and vibrant – more like June, or early July, than August.

For the first couple of days after the big thunderstorm we couldn’t cross the creek near our camp, and therefore couldn’t roam beyond a certain area. But that area turned out to be rich in photographic subjects. Near camp we found a beautiful waterfall, lots of smaller cascades, some late-season flowers, and great views of a lake. We also found a trail (of sorts) up to alpine basins with numerous photogenic tarns – all full to the brim from the recent rains.

Later some of us did cross the creek and venture a little farther afield, where we found more great locations. Just another beautiful part of an amazing mountain range.

When preparing to visit an area I’ve never been to before, like this, I typically do a bit of research in advance to see what some of the photographic possibilities are. That includes looking at photos from the area – not with the intention of imitating what others have done, but to see some of the potential, to spark ideas about places to explore, and to make sure I don’t miss something I shouldn’t miss.

Interestingly, one of my companions on this trip, G Dan Mitchell, makes it a point to not learn anything about a location before he visits it. He’d rather arrive with no preconceptions, explore, and see what he finds. That allows him to experience even well-known places with a sense of discovery – because they’re new to him. And for Dan that clearly works. There’s no right or wrong way to do this.

Ironically, Dan was the only person in our group who had been to this area before – though it was on a backpacking trip many years ago. For the rest of us this was uncharted territory (though some of us had been relatively close by before).

For this trip, my research only went so far. Partly that was because this region hadn’t been as thoroughly explored by serious photographers as other places found closer to the road. That’s understandable, and to me, a good thing, as it left lots of fertile ground for new discoveries.

But also, everyone sees things differently. I might be attracted to a subject or scene that others wouldn’t, and vice versa. Sometimes the only way to discover a spot that fits your vision is to see it and recognize it yourself. And the only way to do that is to get out and explore. Most of my favorite locations on this trip were found that way.

When you find a “new” location (in the sense that you haven’t seen photos of it before, or have any other advance knowledge of how to photograph it), you have to figure out if that spot is really worthwhile, what some of the possibilities are, what it might look like under different lighting and weather conditions – and sometimes, whether it might be worth getting up at 4:00 a.m. to go there for sunrise! But there is a certain joy and satisfaction in finding these places for yourself, without being led there by other people’s photos, or a guidebook.

The image at the top of this post is from a spot that Franka Gabler and I “discovered” (I’m sure others have photographed this area before) one morning. We had photographed some cascades and a lower tarn at sunrise, then, after the best light seemed to be over, decided to hike up higher to scout, where we found a series of beautiful tarns, all full from the recent rains.

Franka and I both wanted to return to these tarns, but figured the optimal time would be sunrise, which would require an awfully early start to make the hike up to this high-elevation spot. One evening we were discussing this possibility, but I was feeling tired, so I told Franka I would only go if she could guarantee that there would be clouds in the morning. She laughed of course. But okay, I decided I would get up early and go. I knew I’d regret it if I didn’t.

And there were clouds. Beautiful clouds. But maybe too many? The clouds to the east seemed to block the early light, but shortly after sunrise the sun broke through a gap to light the peaks – though only for a few minutes. I had a different composition set up, which I photographed, and then quickly scurried to another spot, which I ended up liking better (the view at the top of this post).

In hindsight I would have gone to this view first. And that’s the downside to photographing unfamiliar locations; you can’t really be sure how you will like a certain spot or a certain view until you see it in the right light, and when you do it’s often too late to change your mind. In this case I got lucky and could quickly move, compose, and shoot before the light faded.

All that exploration – and photography – required considerable effort. The hikes weren’t that long, but often required steep climbs, and doing that each morning and evening added up. And then there were those 4:00 a.m. starts… I was pretty tired by the end of the trip, but it was totally worth it.

Here are some more photos from the later, drier part of our trip, showing some of the wonderful variety we found within this relatively small area.

P.S. We had wonderful companions on this trip – all talented photographers with their own unique style and vision. In addition to G Dan Mitchell, and my wife Claudia, our group included Franka Gabler, David Hoffman, Jerry Bosworth, and Patty Mitchell. I always think it’s interesting to see how different people can be photographing in the same area at the same time, yet see completely different things, so I’ve linked to their websites, Flickr, or Facebook pages, where you might see some of their work from this trip. 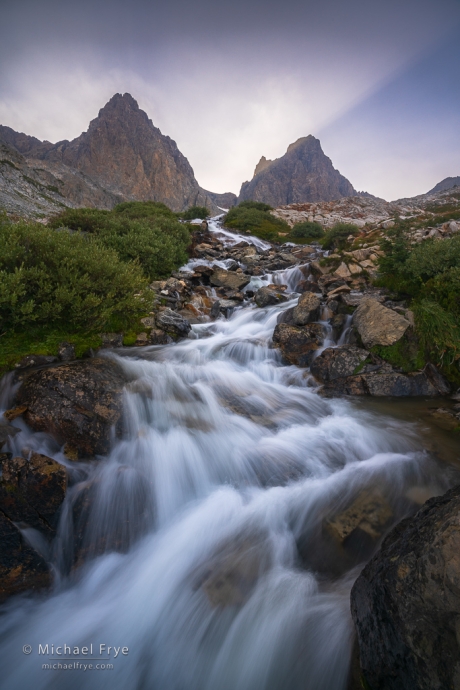 Peaks, cascade, and sunbeams, Sierra Nevada, California. This was the only smoke we saw during our trip; I’m not sure which fire the smoke was from. 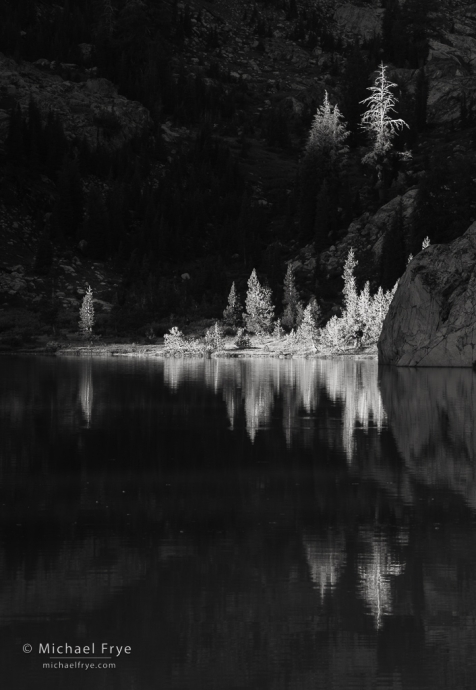 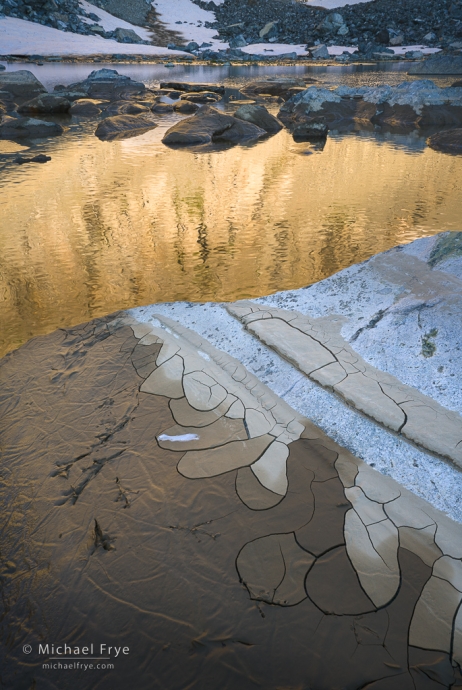 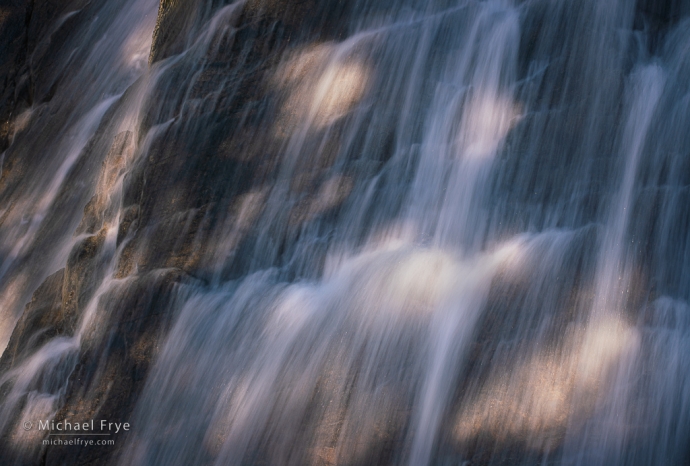 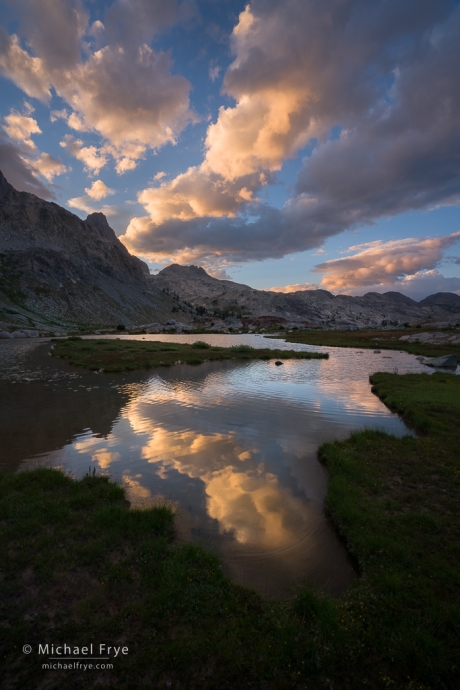 Sunset clouds reflected in an alpine tarn, Sierra Nevada, California. Claudia and I were exploring a basin that Dan had told us about, and could see a tarn or small lake on the map, so we decided to check it out. It was lovely. 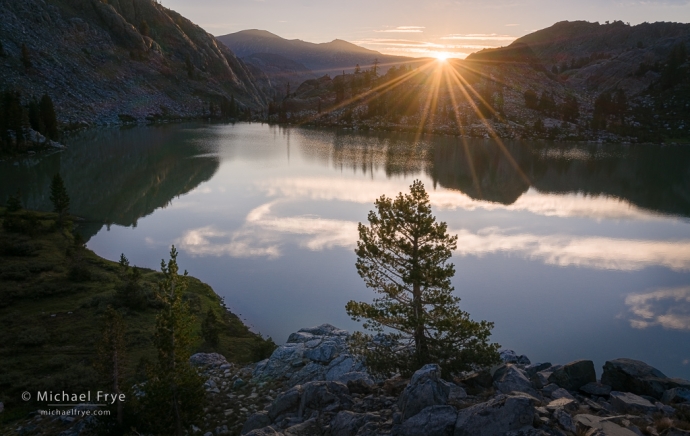 Lake and tree at sunrise, Sierra Nevada, California. Sunrise on our last morning.

Related Posts: Into the High Sierra; Summer in the High Country