Evenings at the Lake 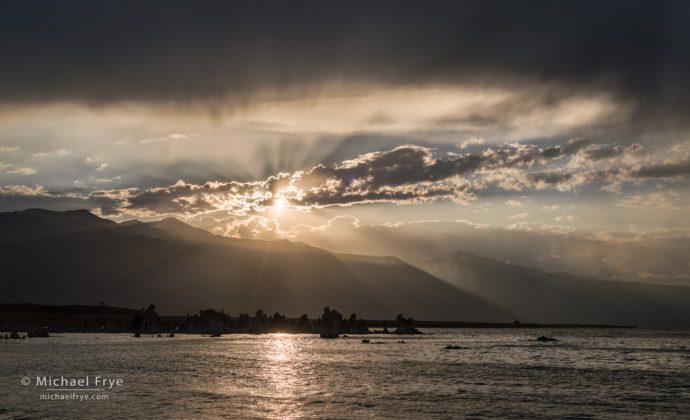 Sun setting over Mono Lake, California. Anticipating that sunbeams might appear to the west, I moved to line up the sun with some tufa formations, and captured this scene as the sun broke through a bank of clouds. Five frames, two stops apart, each at 50mm, f/11, and ISO 100, blended with Lightroom’s HDR Merge.

If you’re used to lakes in other parts of the world, Mono Lake might seem like a strange place. The water is salty – two to three times saltier than the ocean. It’s surrounded by sagebrush desert, and instead of trees along the shore you find those otherworldly tufa formations.

You won’t see many people swimming in Mono Lake. You won’t find lifeguards and buoys, windsurfers, or kids splashing in the water playing Marco Polo. Although the very-salty water allows people to float easily, it also leaves a salty and somewhat-soapy alkaline residue on the skin, with no convenient beachside showers available to rinse off in.

So most people stay out of the water. And most people also visit the lake in the middle of the day, when the lakeshore can feel austere and inhospitable – especially on a hot summer afternoon.

But photographers are crepuscular creatures, most active around sunrise and sunset. So we are, perhaps, more likely to appreciate the unusual charms of a place like Mono Lake. Early and late in the day the temperatures are cooler, the light is warm and inviting, and the lake’s thousands of birds come alive.

Earlier this summer Claudia and I got to spend several serene evenings along the shores of Mono Lake watching the light and birds. We saw some beautiful clouds, and flocks of phalaropes turning and wheeling over the water. One evening a thunderstorm passed by to the west, leaving dramatic sunbeams in its wake.

Here are a few photographs from those evenings. In a couple of these I tried to capture the phalaropes as part of the landscape, setting up a composition, then waiting for the birds to enter the frame. In the other images I was just reacting to the light, trying to put my myself in the best position to capture whatever was happening at the time.

Soon we’ll be heading out on some autumn adventures, but before that we hope to spend more mornings and evenings at this strange but beautiful lake. 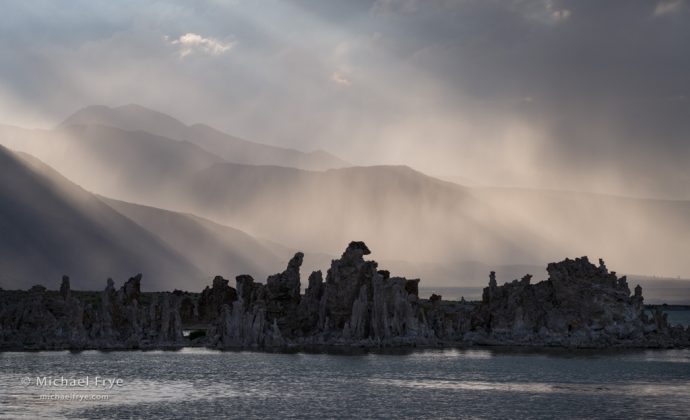 Sunbeams and tufa, Mono Lake, California. One evening a thunderstorm passed by to the west, leaving these sunbeams in its wake. I moved along the lakeshore to find an interesting juxtaposition between tufa formations and the sunbeams. 141mm, 1/25 sec. at f/16, ISO 100. 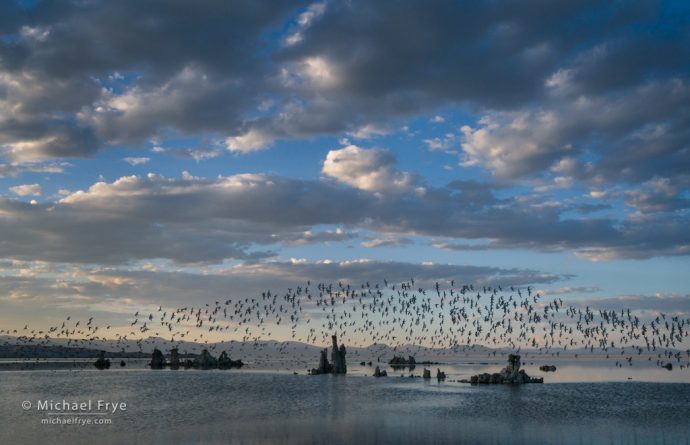 Clouds, tufa, and phalaropes, Mono Lake, California. The clouds were beautiful on this evening, and phalaropes were active in the area, so I framed a composition with tufa and clouds, and waited for some birds to fly through the frame. 35mm, 1/2000 sec. at f/8, ISO 1250. 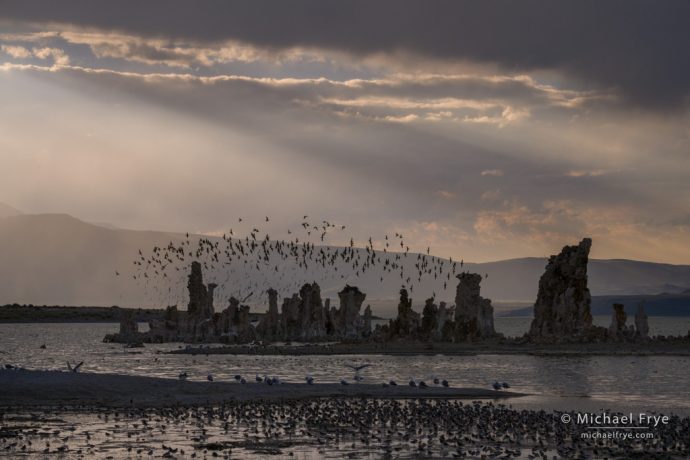 Phalaropes, gulls, sunbeams, and tufa, Mono Lake, California. With sunbeams in the distance, tufa towers in the middle ground, and phalaropes roosting and feeding on the near shore, all this scene needed was some birds in the air. Anticipating that, I pushed up my ISO to get a fast shutter speed, waited, and was eventually rewarded when this small flock of phalaropes wheeled over the tufa. 100mm, 1/1000 sec. at f/16, ISO 1250.