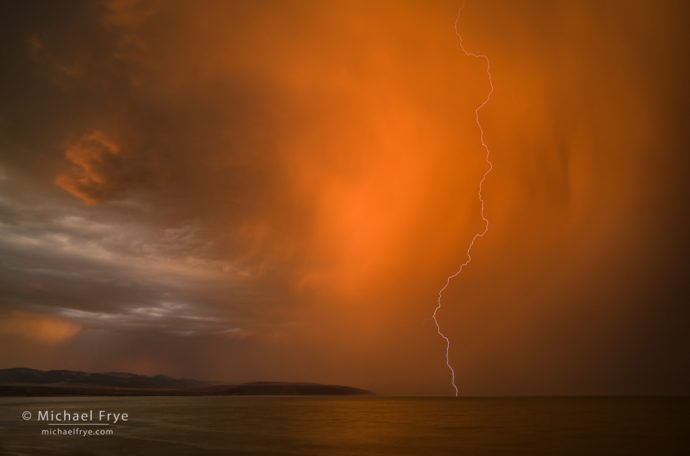 As most of you know, an unusually-strong series of thunderstorms reached California the weekend before last (August 15th and 16th), and dry lightning sparked numerous wildfires. Two of those fires (the LNU Complex and the SCU Complex) have become among the largest in state history. Our hearts go out to those who have lost homes and loved ones in the fires.

The lightning reached the San Francisco Bay Area in the early-morning hours on Sunday, August 16th. Claudia and I were in Lee Vining (near Mono Lake) that day, and things were quiet that morning, but thunderstorms moved into the area from the south that afternoon.

At around 5:30 it still wasn’t raining in town, so Claudia decided to take our dog Rider out to South Tufa at Mono Lake for a walk. South Tufa is one of Rider’s favorite places, since it’s home to lots of bunnies. I stayed in our hotel room, getting some work done. But a few minutes later Claudia texted me to say that there was a rainbow visible. I got my gear together and drove that way. (We had two cars over there; it’s a long story).

I found Claudia along Highway 120 before the turnoff to South Tufa. By then the rainbow had mostly faded, but I knew it could come back. We could see dark clouds and frequent cloud-to-ground lightning strikes to the east. I drove down to South Tufa while Claudia stayed and watched the storm from her spot next to the highway.

As I walked down to the lake from the parking area I saw a small plume of smoke to the east; apparently one of the lightning strikes had started a fire. It looked like it was near the access road to Navy Beach. I used my cell to call 911, but it was busy. I tried again – same result. Then Claudia texted me to say that she had gotten through and they knew about the fire. 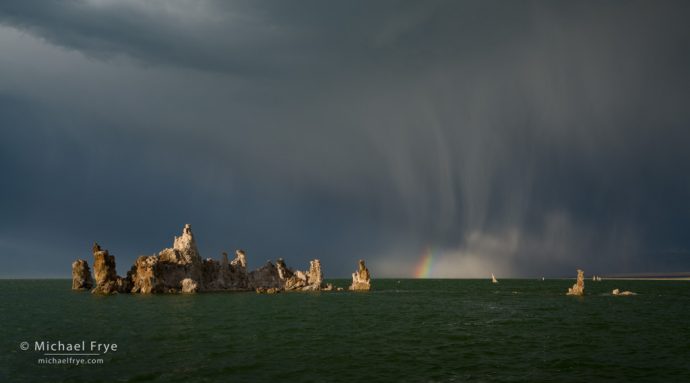 I got down to the lake and waited for the rainbow to re-materialize, which it did, eventually, though it was rather small and distant. Meanwhile the smoke plume grew larger, and I spotted a second, smaller plume, farther away, but still saw no sign of fire vehicles. Finally I spotted a sheriff’s vehicle at the Navy Beach parking lot, probably evacuating the two other vehicles that remained there. 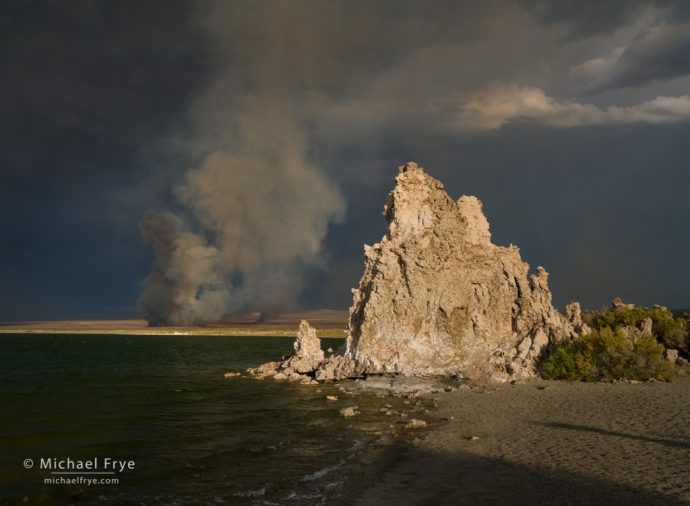 Soon after that I got a text saying that they were evacuating South Tufa. I started walking back to the parking lot, and heard a loudspeaker announcing the evacuation. When I got back I realized that my car was the last one in the parking lot. A sheriff deputy’s vehicle was waiting for me. I waved, the deputy waved back, and shouted, “Sorry!” I said, “No worries! I understand!”

I drove out to 120 and joined Claudia and other onlookers at her spot on a hill overlooking the lake. There we watched and photographed the fire growing larger and more and more emergency vehicles arriving – all of this set against the backdrop of the dark clouds and lightning strikes to the northeast. Here’s an amazing photo Claudia made with her iPhone of a lightning strike and the growing fire: 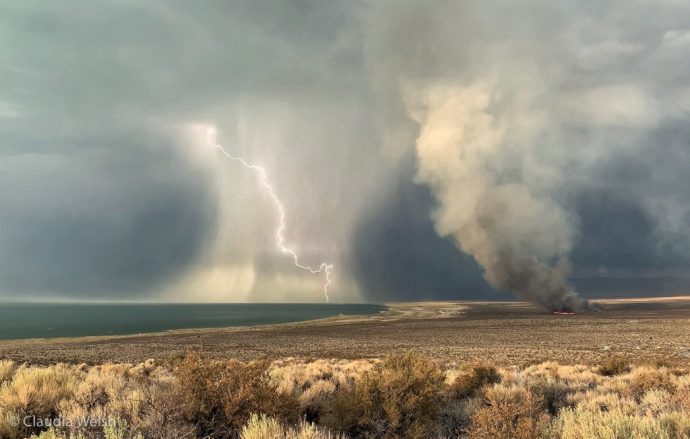 Lightning and smoke from the Beach Fire, Mono Lake, by Claudia Welsh

Soon thereafter another sheriff’s deputy came along and moved us out, saying that Highway 120 was now closed. We joined a line of cars heading back to Highway 395.

By then sunset was approaching. The storm was moving north, so I knew there was still a chance of seeing a rainbow if I could get to the west side of Mono Lake, north of Lee Vining. I drove through town, with Claudia following behind me, and could see the clouds over the lake starting to turn orange. Then I spotted a faint rainbow. And I could see frequent lightning over the lake.

I headed for a turnout above the west shore of the lake, a favorite spot. As I approached I evaluated the situation. I wouldn’t have much time once I got to the turnout, so I tried to pre-plan as much as possible. The storm was close to shore, so I decided to use my 16-35mm zoom to get a wide view. To catch lightning I would have to put on a neutral-density filter and make a series of long exposures, hoping that some lightning would appear in one of the frames. I knew a polarizing filter would help bring out the rainbow, but when I pulled into the turnout the rainbow was starting to fade, so I decided to leave the polarizer off.

It was raining lightly when I got out of the car. I put the 16-35mm zoom on the camera, mounted that on my tripod, and threaded a step-up ring and seven-stop ND filter onto the lens. It was raining lightly, and a lens hood would have helped keep water drops off the lens, but the hood wouldn’t fit over the step-up ring and ND filter, so I just held my hand above the front of the lens. When Claudia pulled up I asked her if she had an umbrella. She rummaged around the car and found one, but she wouldn’t hold it for me. By then lightning was getting closer, and she told me that one of us had to live through this! She got back in the car.

So holding the umbrella in one hand and operating the camera with the other, I did my best to capture some lightning images. I started making a series of 30-second exposures at f/11 and ISO 100. On the second frame a bolt went straight through the picture. But when the exposure finished I could see that the lightning looked very faint on the back of the camera. Why? It was pretty dark by then, and I thought the lightning should stand out better. But then I remembered that exposures for lightning depended on aperture and ISO, not shutter speed. The length of exposure for the lightning was essentially the split-second duration of the lightning bolt. So I opened my aperture to f/5.6 (two stops lighter), shortened the shutter speed to 8 seconds (two stops darker), and started another series of exposures. And this time the second frame captured a clear, bright bolt of lightning – the photograph at the top of this post.

I made a couple more exposures, but by then lightning was striking all around us, and suddenly the skies opened up into a downpour. I hurriedly threw my camera, tripod, and umbrella into the trunk and got in the car as hail began to pelt the windshield.

The fire near South Tufa (the Beach Fire, as it came to be called) reached 3,700 acres in size, but was mostly contained and emitting little smoke within a couple of days. Meanwhile the fires near the Bay Area grew exponentially. Almost the entire state has smoky skies, though fire activity has slowed over the last couple of days, and the air has improved a little. Let’s hope that firefighters are able to contain these massive fires soon. And if we’re lucky, maybe autumn will come early, with a good, soaking, September rainstorm to douse the fires and clear the air.