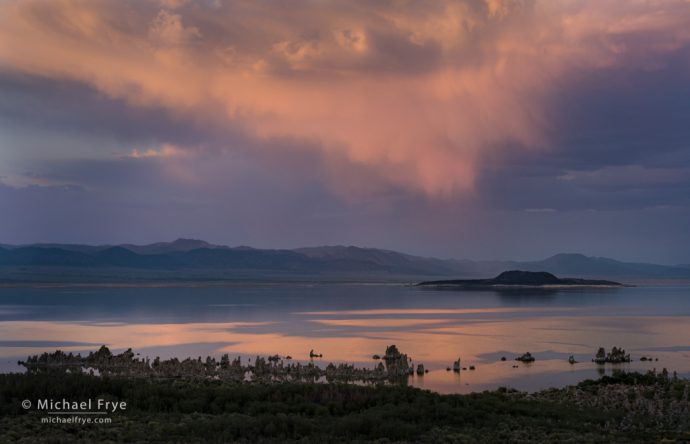 Clouds, tufa, and Negit Island at sunset, Mono Lake, California. This rain cloud lingered for awhile in the same location, allowing me to capture variations of this scene as the sun lowered, and the wind altered the reflections. 70mm, 1/15 sec. at f/11, ISO 100.

Mono Lake is a unique and beautiful place. It’s known for its tufa formations, but there’s so much more to it. It’s a giant pool surrounded by desert sage, and bounded by the peaks of the Sierra Nevada to the west. In summer, monsoonal moisture often arrives from the southeast and runs into that mountain wall, where the moisture gets pushed upward, forming clouds, showers, and thunderstorms. The lake becomes a vector for these storms.

While staying in Lee Vining a couple of weeks ago, we saw clouds and showers each afternoon, and had several opportunities to photograph beautiful evening light at the lake (along with a colorful sunrise). Under those conditions the lake can reflect clouds in beautiful ways, creating swaths of color and light across the sky and water.

When my photography is guided by moving, shifting clouds, I try to stay fluid and adaptable. I might be drawn to a certain scene, but after awhile the clouds move on, the view gets less interesting, and it’s time for me to move on as well. Luckily there’s enough of a road network around the western side of Mono Lake to allow for fairly quick changes in location.

It can be easy to second-guess yourself. Should I have gone over there instead of over here? Sometimes, no matter how experienced you are at predicting cloud movements, you get it wrong. The clouds and showers associated with these summer monsoons are local, ephemeral, and hard to predict, so I try not to be too hard on myself if I guess wrong. That’s just part of being a landscape photographer.

And sometimes I might think I made the wrong choice, but then wait awhile, watch the clouds shift again, and realize that perhaps I made the right choice after all. When things are changing, sometimes patience pays off. In fact many times there are several “right” answers (as Dewitt Jones would say), where more than one location could be beautiful at the same time – especially in a wide-open expanse like Mono Lake.

Here are a few of my attempts to capture the natural canvases created by the clouds and light over this beautiful lake.

Reflections in Mono Lake, California. As I was photographing the scene at the top of this post, off to the right I noticed these bands of color created by varying winds across the lake, so I put on my 100-400mm lens to zoom in on this composition. 380mm, 1/20 sec. at f/11, ISO 100. 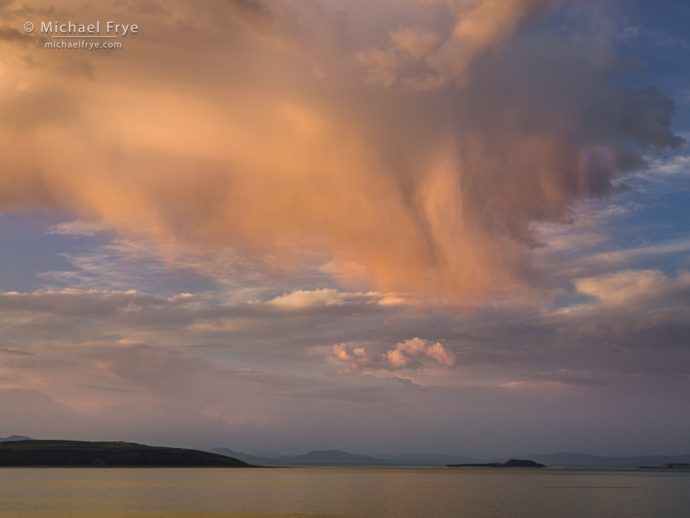 Rain cloud over Mono Lake, California. A different day, a different rain cloud, and a different location. This was one of those times when, at first, I thought I might have gone to the wrong spot. But then I noticed that this cloud was moving out over the lake, and into a better position compositionally, so I stayed put. 32mm, 1/45 sec. at f/11, ISO 100. 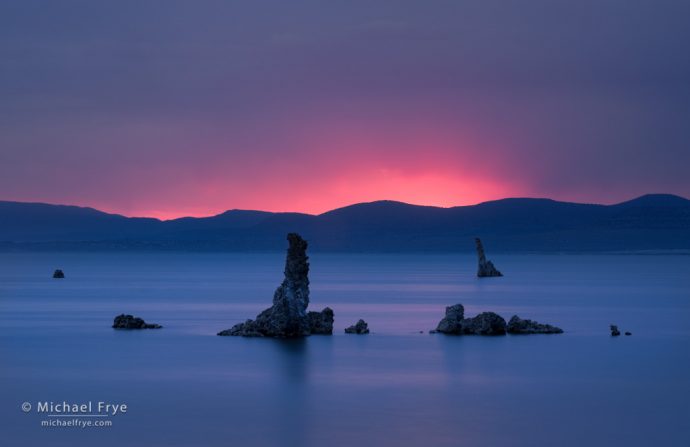 Tufa formations at sunrise, Mono Lake, California. I rose early, saw that there were clouds, and headed out to South Tufa, only to find that skies were almost completely overcast. But right before sunrise a red glow appeared just above the horizon, so I moved to position these tufa formations in front of that glow. 143mm, 30 seconds at f/16, ISO 100, with a neutral-density filter to slow the shutter speed and smooth the choppy water.

Related Posts: Should I Stay or Should I Go?; Lightning Storm at Mono Lake