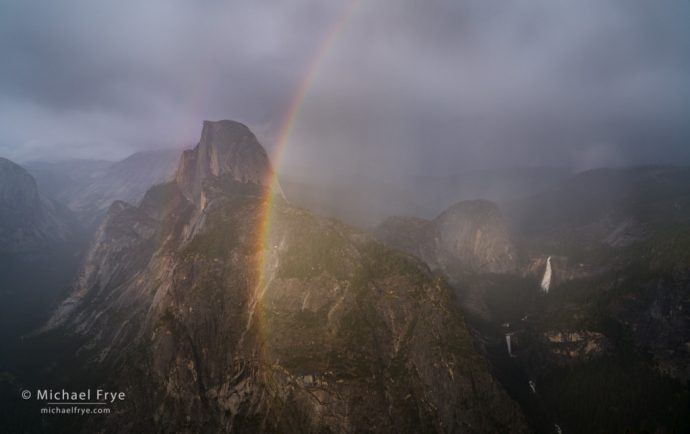 Half Dome, Nevada Fall, and rainbow, Yosemite. I made this photograph shortly after the rainbow first appeared. 28mm, 1/4 sec. at f/11, ISO 100, polarizer.

It’s fun getting wet. Seriously – ask any kid. And for photographers, sometimes you need to stand in the rain, or the spray of a waterfall, to see some dramatic light – including rainbows.

Last weekend a small low-pressure system moved through our area, and forecasts called for some afternoon thunderstorm activity. It looked like the best chance of rain was Sunday, so Claudia and I made our way up to Yosemite Valley that afternoon.

By three o’clock skies were completely overcast. I think the cloud cover inhibited thunderstorm development, since thunderstorms usually require heating from the sun to create updrafts and destabilize the atmosphere. There were some small showers in the area, and we felt a few sprinkles, but that was about it. Nevertheless, satellite images showed clear skies over the Central Valley, so there was a good chance the sun would break underneath the clouds late in the day. We decided to head to Glacier Point, since we hadn’t been up there yet this year.

I could see that the cloud deck was quite low, touching the rim of Yosemite Valley in places, so I hoped we might be able get up into the clouds and photograph trees in the fog. And at one of the high points along the Glacier Point Road we did climb up into the clouds, and into the fog. I hiked up a small ridge that had some interesting-looking trees, where I found this scene:

The fog lifted, so we continued out to Glacier Point. At first Half Dome was completely hidden in the clouds, but it soon emerged. There wasn’t any sunlight, but the stormy skies seemed suited to black-and-white photographs.

We had encountered a few sprinkles, but then I could see a more substantial shower moving in from the northeast (you can see that shower on the left side of the photo above). The radar showed a large patch of rain heading toward us. You never know how these things will go; the rain could have just dissipated before it reached us. But this shower kept moving in, and the rain steadily increased. It became difficult to keep my lens dry, so Claudia and I retreated to the shelter of the Geology Hut.

But from there I kept seeing beautiful, misty scenes of Half Dome and Nevada Fall, so I decided to buck up and head back out to a better viewpoint. I put on my rain pants, added a rain cover to my camera, attached a lens hood to help keep the front of the lens dry, and kept a lens cloth handy to wipe drops off my lens. Luckily the camera and I stayed reasonably dry. 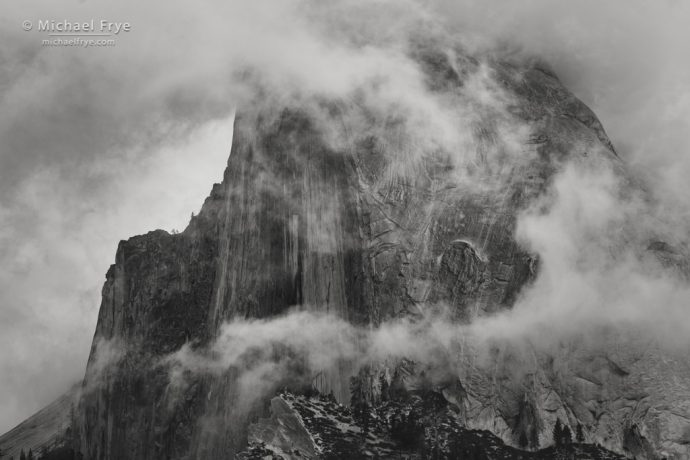 Eventually the skies started to lighten a bit, and the rain let up, though it didn’t stop completely. And then I noticed a faint rainbow.

That surprised me. You need sunlight to see a rainbow, and there wasn’t any. Well obviously there had to be, but it was weak. Apparently the sun was starting to break through clouds behind me.

Well great, I’ll take it! I put on a polarizer (being careful not to get raindrops on it in the process) and adjusted it to bring out the rainbow a little more. The sunlight grew stronger, and the rainbow became more distinct.

The rainbow stayed around for twenty minutes. For much of that time I could see both ends of it, with the left side near Half Dome, and the other side over to the right past Mt. Starr King. At times the whole arc of the rainbow was visible, though its top was faint.

Rainbow panorama from Glacier Point, Yosemite. Made a little later than the image at the top of the post, but it was still raining. 28mm, 1/6 sec. at f/11, ISO 100, polarizer; stitched panorama.

It was raining lightly most of the time the rainbow was visible. The wind was blowing toward me, so the lens hood didn’t help much, and I had to keep wiping raindrops off my polarizing filter. Drops of water on the front glass can completely ruin a photo – to the point where it’s impossible to fix, even in Photoshop. So keeping the filter dry was critical.

It’s possible to see rainbows when it’s not raining on you. But you often see the best rainbows while you’re in the rain, and the sun is hitting you, or hitting the falling rain right in front of you. Under those conditions you’re likely to see the whole arc. While it’s possible to see a full arc while staying dry, it’s much more likely that you’ll see the full arc when you’re actually standing in the rain. (This post shows another example of that.)

And on Sunday afternoon, if I hadn’t already been out photographing in the rain, I might have missed those early moments when the rainbow first appeared – which turned out to be my favorite images.

So embrace that wetness! It’ll make things more challenging, but also possibly more rewarding. Just be sure to keep your camera and the front of the lens dry! 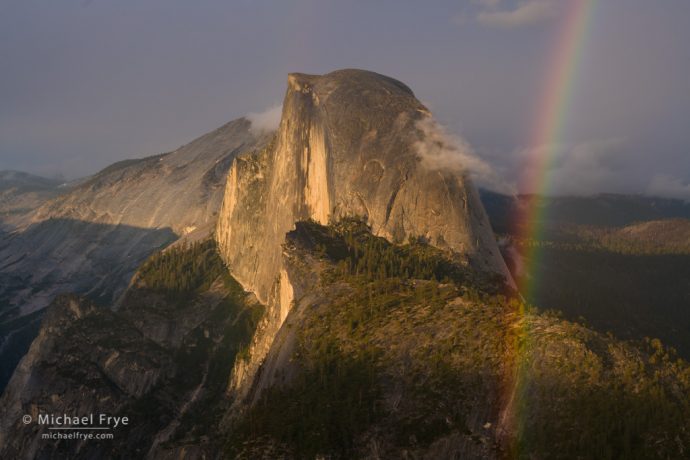