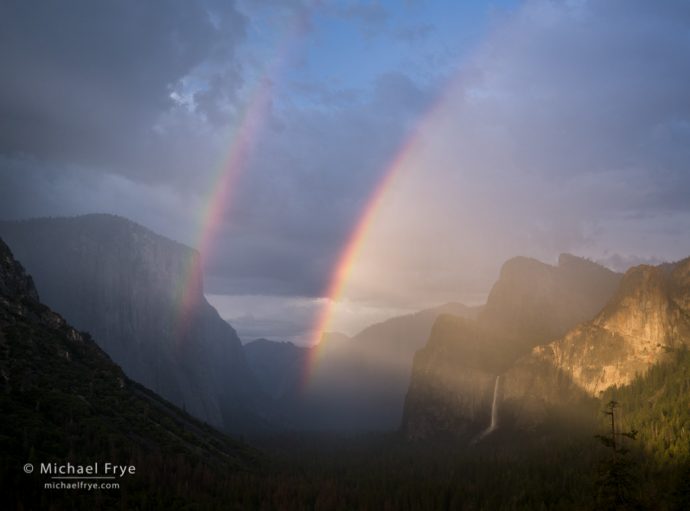 I’m always looking for interesting weather. On Sunday the forecast called for a chance of showers and thunderstorms, so that afternoon Claudia and I decided to brave the weekend traffic and head up to Yosemite Valley.

The traffic actually wasn’t too bad, and we did encounter some rain. After a small shower passed through we went to El Capitan Meadow and spent some time photographing azaleas. I kept checking the radar on my phone, and saw that another, stronger shower was headed our way. With clear skies to the west, and this new shower coming from the southeast, that meant we could see sun hitting rain – and a rainbow. Claudia was in another part of the meadow, so I texted her and said, “Maybe we should go to the Tunnel.”

Arriving at Tunnel View, I set up my tripod and waited. Within five minutes a faint rainbow appeared. There were half a dozen other photographers there, and we watched the rainbow closely, hoping it would intensify, but instead it faded. After awhile it reappeared, faintly, then faded again. This pattern kept repeating for almost an hour. Sometimes the rainbow became a little stronger, and we even saw faint double rainbows at certain moments. I exposed a few frames, but I had seen much better rainbows from this spot before. We were standing in sunshine the whole time, and there was plenty of sun hitting the rain, but it never seemed to rain hard enough to create a vivid rainbow.

I thought about leaving a couple of times, but decided to wait. I continued to check the radar images on my phone, and saw another shower approaching. The previous showers had moved over the eastern end of Yosemite Valley, but this one looked like it was headed right toward us. That might be good for rainbow formation, but it also meant that we could get wet.

After awhile it began raining harder, so I got out my lens hood to help keep raindrops off the front of the lens, and put a rain cover over my camera. The rainbow got a little stronger, and kept growing in intensity. A distinct secondary rainbow appeared to the left of the primary one.

By then it was raining pretty hard at Tunnel View, and the wind was blowing into my face, so it was difficult to keep water off the lens. I had to repeatedly turn the camera around, wipe my polarizing filter off with a lens cloth, turn the camera back toward the rainbow, and quickly compose and shoot before the lens accumulated too many raindrops. Several times I accidentally rotated the polarizer while cleaning it, meaning that it wasn’t adjusted correctly, so I had to readjust it, then turn the camera around and repeat the whole process of wiping the filter clean – this time making sure to avoid accidentally rotating the polarizer.

Luckily the most intense rainbow colors lasted for several minutes. I varied my compositions from horizontal to vertical, wider to tighter, as the light changed and the rainbow grew. My favorite moment is shown above, just as the rainbow attained its most vivid color.

Many of you probably know that a rainbow forms a 42-degree circle around a point opposite the sun (the antisolar point). That means that you need to have your back to the sun to see a rainbow (and have sunlight hitting rain or spray). Rainbows can be full circles, but since the sun is above us, and therefore the antisolar point is below us, we typically only see the part of the arc that forms the top of that circle. Here we see the upper-left portion of the circle.

If you’re lucky enough to see a vivid rainbow you’re likely to see the secondary rainbow too. The secondary rainbow is fainter, but has broader bands of color appearing in reverse order, with red on the inside of the arc, and violet on the outside. But there are many other fascinating aspects to rainbows, and other rainbow-like optical phenomena. For instance, if you click on the image above to see it larger, you might notice that there are some extra bands of color on the inside of the main rainbow, near the top. As this Wikipedia article explains, these are probably supernumerary bands. Looking back through some of my rainbow photos it seems that these extra bands are actually pretty common with intense rainbows. Also, did you know that it’s always brighter inside the rainbow’s circle than outside? That same Wikipedia article gives an explanation that’s way over my head, but you can see that increased brightness in the photo above, and also in this one (especially on the left side of the rainbow).

After about five minutes the double rainbow finally faded, leaving a bunch of happy photographers at Tunnel View. The clouds and showers turned into a spectacular sunset, which I photographed from El Cap Meadow; I’ll post a couple of photos from there shortly. We had a great afternoon.