Lightning Over the Central Valley 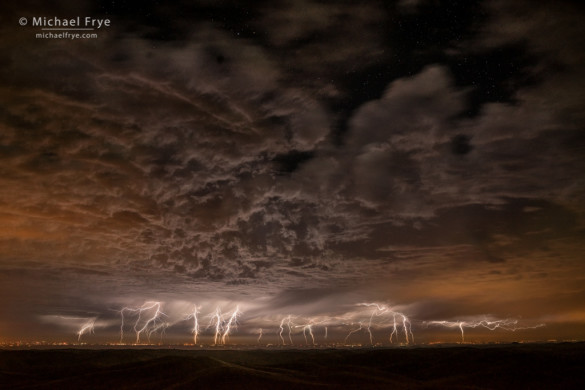 Lightning over the San Joaquin Valley from the Sierra Nevada foothills, California, USA

This summer I’ve often heard my fellow Californians making comments like, “Weird weather we’re having,” or “Interesting weather, isn’t it?” Yes indeed. Typically most of the state receives no precipitation from May through September, but this summer we’ve had lots of subtropical moisture drifting northward into the state, triggering showers and thunderstorms. The rains have mostly been light and scattered, so haven’t made any real dent in the drought, but have created interesting conditions for photography.

Last Thursday forecasters predicted another subtropical surge approaching, but we didn’t see much sign of it at our house. Then Claudia and I got into our hot tub around 10:30 p.m. (our nightly ritual before going to bed) and immediately noticed distant flashes of lightning. We couldn’t figure out where they were coming from at first; maybe the west? So I got out of the tub to check radar images, and saw that the nearest storms that could possibly be creating lightning were near the coast! That seemed impossibly far, but then last summer at Mono Lake, during our Starry Skies workshop, we saw distant flashes of lightning, and they turned out to be in eastern Nevada, 200 miles away. So yes, it was indeed possible to see flashes from lightning in the coast ranges, only 80 miles from our house.

The radar suggested that the thunderstorms were moving gradually to the east into the Central Valley, so they might get closer. Eventually I decided to forego sleep and drive to a viewpoint in the lower Sierra foothills.

I arrived at this spot at about 1:00 a.m., and could see lightning immediately. Not just cloud-to-cloud lightning, but bolts hitting the ground – an essential ingredient for good lightning photographs. Since the lightning was at least 30 or 40 miles away, my first thought was to zoom in with a telephoto lens. That worked – I caught some good lightning strikes – but I knew the resulting image would be similar to the last lightning photograph I made.

I thought about what I could do differently. There were some interesting, broken clouds above, with stars poking through, so I decided to use a wider lens to include more of that sky. I put on my 50mm lens, but then realized that if I wanted to capture pinpoint stars with that focal length I would be limited to eight-second exposures, which would be awfully short for capturing lightning. So I switched to my 24mm lens. Not only would that allow me to use 20-second exposures without the stars turning into streaks, but I could also include more sky. I envisioned making a photograph with a row of lightning bolts along the bottom, plus clouds and stars above.

I set the aperture to f/8, at 400 ISO, with a shutter speed of 20 seconds. A wider aperture or higher ISO would have made the clouds lighter, but would also have risked overexposing the brightest lightning strikes. Actually, it wasn’t the bolts themselves I was concerned about; it would have been okay if those were actually blown out, since we wouldn’t normally see detail in them. But I wanted to make sure I didn’t overexpose the clouds immediately adjacent to the lightning. In hindsight, I probably could have used f/5.6, or 800 ISO, without overexposing anything essential. This would have given the higher clouds more illumination, which would have helped, as I had to lighten the upper part of the final image by more than two stops in processing.

I locked the shutter button on my cable release open so the camera would take a continuous series of 20-second exposures. In this mode, my Sony A7r actually displays the last image on the LCD screen while it’s taking the next exposure, so I had 20 seconds to examine the last frame and see if it recorded any lightning strikes.

And if that wasn’t enough to keep me entertained, I had company. No, Claudia didn’t come with me; she had the good sense to go to bed. But at one point I heard a noise nearby, so I turned on my headlamp and saw a snake about 25 feet away. I knew it had to be a rattlesnake, but just to be sure I moved closer to get a better look. Triangular head, rattles on tail: sure enough.

The snake was meandering around the open patch of dirt on top of the hill where I had parked my car and set up my tripod. Apparently it was hunting. It didn’t seem to notice me, but I looked around for a stick to fend it off in case it moved closer to my camera. However there were no sticks, as there were no trees nearby. The only snake-herding tool available was my tripod, and of course I didn’t want to move that, as that would force me to start my whole exposure sequence over again.

So the best I could do was get closer to the snake and stamp my feet, hoping it would feel the vibrations. It did move away a little, slowly, though it didn’t seem alarmed at all. I decided that the snake wasn’t a problem, as long as it didn’t come too close. So I kept tabs on it with my headlamp from time to time as it meandered around. One time I turned on my headlamp to locate the snake, and just as my light reached it a kangaroo rat bounded away. I think my light startled the ‘roo rat, and may have saved its life, since it had been only a foot or two in front of the snake.

I kept the sequence going for about two hours. Some showers moved closer, and twice it started to rain, forcing me to cover the camera. Eventually lightning struck about four miles to the south. Since I knew that storm was moving north, toward me, and I was in a high, exposed spot, I decided to pack up. The lightning out to the west had died down anyway, and it was starting to rain harder. I checked on the snake one more time, but it had disappeared; maybe the rain drove it underground.

The final image above is a blend of 13 frames, taken over about an hour when the lightning was most active. Most of the final photograph consists of just one frame, when one of the lightning bolts (the brightest one, just left of center) illuminated a particularly interesting formation of clouds. (The clouds are also getting some light from a half-full moon, while the orange glow comes from manmade lights below.) I had to brighten that frame considerably in Lightroom to bring out the detail in the sky, then took that image into Photoshop and blended it with the other frames containing lightning bolts, using the Lighten blending mode and layer masks. All you see of those other frames is the lightning itself, and some immediately-adjacent clouds that were illuminated by the bolts.

I got home about 5:00 a.m. While I didn’t get much sleep, it was a really fun night. There’s nothing like photography to get you out to strange places at unusual times to see things you wouldn’t otherwise see. It was quite a light show. And it turned out to be nearly perfect conditions for photographing lightning: the storms were moving south to north, while I was looking west, which kept the lightning at a safe distance, and allowed me to photograph it over a long period of time.

I know that Monterey and the Bay Area also had good lightning displays on Thursday. Did any of you photograph lightning that night? If so, I’d love to see your photos – you can post a link to them in the comments. For that matter, if you’ve photographed lightning anywhere recently feel free to post a link.