I’m not sure who decided that the winter solstice should be the first official day of winter, but I think that official designation is rather absurd. Winter has definitely arrived in many parts of the country, whether it’s official or not, including here in the Sierra. This past week Yosemite got its first precipitation in months, in the form of a cold storm that dropped over a foot of snow on the valley floor.

The snow began on Tuesday, and I kept my eye on the weather, of course, hoping to photograph the storm clearing, and looking for potential rifts in the clouds. Judging by satellite images, some stars might have appeared during the wee hours of Wednesday morning, but that was just a brief break before the clouds closed in again. Late Friday morning the sun finally started to poke through the clouds, so Claudia and I headed up to the valley.

I photographed mist-shrouded El Capitan in late-afternoon light (see the photographs below), and then the skies congealed again, with off-and-on snow showers lasting through sunset. But it looked like the storm would finally, really break up an hour or two after sunset, so Claudia and I headed to the Lodge bar for an early dinner, and then ventured out into the dark, moonless night.

I headed to a spot I had scouted during the afternoon near Valley View, with a nice foreground arrangement of snow mounds on the edge of the Merced River.

I had to wait awhile for stars to appear between the clouds, and it was a challenge dealing with lights from many passing cars on the Friday after Thanksgiving, as well as the lights from a nearby group of photographers. But I was finally able to capture the scene at the top of this post, with stars poking through the clouds – and no stray lights.

A second, warmer storm, an atmospheric river, is now dumping lots of rain here. The Yosemite Valley Visitor Center has recorded almost four inches of liquid in its rain gauge since last Tuesday, with another two inches expected out of this current system. Forecasters see two more storms on the horizon for Wednesday and Saturday. Keep it coming! 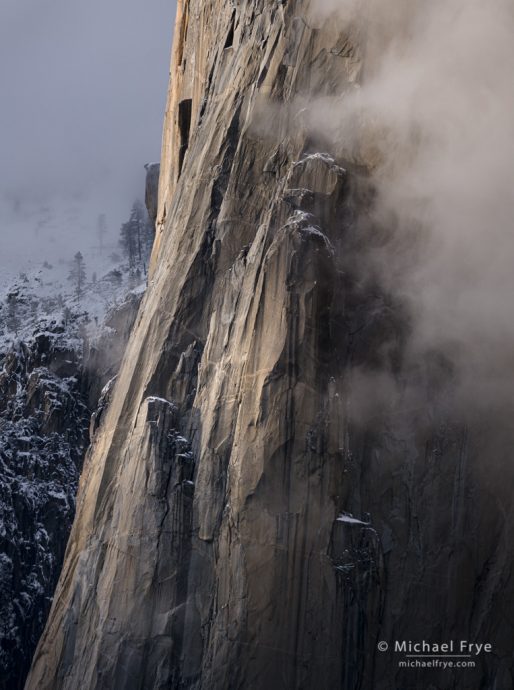 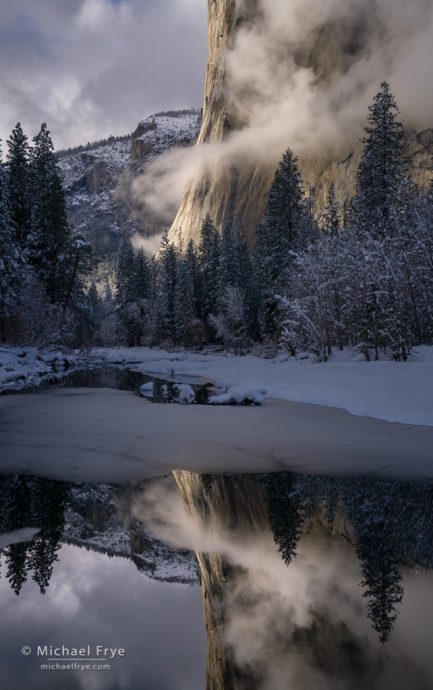