After dark, satellite and radar images showed showers lingering, just as predicted. I decided to drive up to the valley and take my chances, and arrived around 11:30. There were about five inches of new snow on the ground. I couldn’t see any stars, and it was still snowing off and on, so I took a short nap. When I woke up the showers had stopped, so I went to a spot I had picked out that might work for the moonrise, with a view of Half Dome and the Merced River.

As I walked through a snowy forest by the light of my headlamp, I could see that the skies were definitely starting to clear. When I reached the river the moon was just cresting a ridge, but Half Dome was still socked in. I set up my camera and started taking a series of photos, waiting for Half Dome to make an appearance. Sometimes I thought I could see part of it through the moonlit clouds, but then it would disappear again. Finally the top of Half Dome appeared, but the moon had cleared the trees by then, creating excessive contrast. A bit later, however, some clouds partially hid the moon, with moonlight still backlighting the clouds. Conditions were just right for a couple of minutes, and then the moon emerged from behind the clouds again.

The mist disappeared completely a short time after that. I photographed moonlit water along another stretch of the river (see below), then drove home, pulling into the driveway at around 4:30 a.m. I didn’t get much sleep, but it was a great night – just me and the snowplows out in snow, under the moonlight. 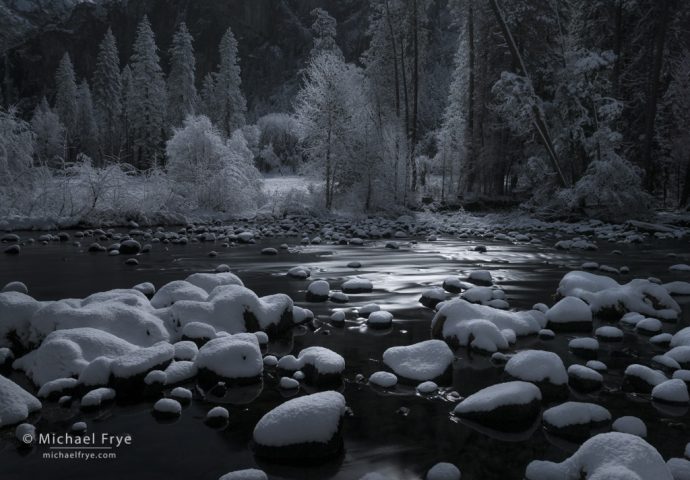