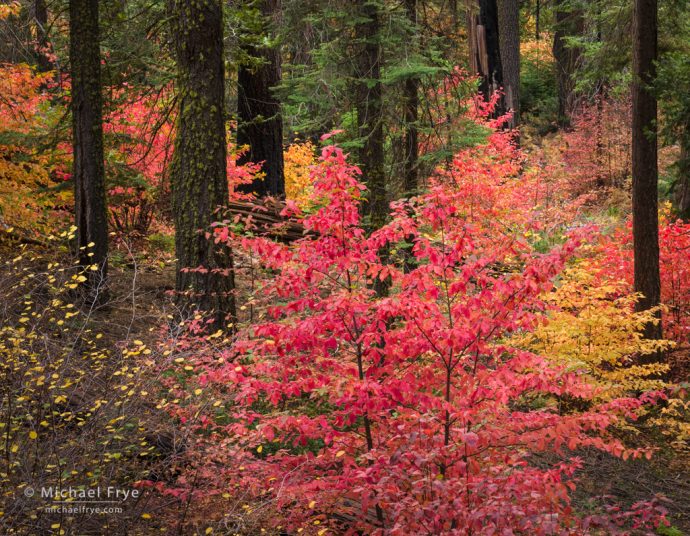 I’ve had that experience often enough to mistrust my ability to edit my own images in the field. I rarely delete photographs in the camera unless they’re obviously flawed (like being out of focus, or severely under- or overexposed).

And if I find a promising scene, I don’t just make one composition and move on. I know the first idea may not be the best one, so I keep looking. If I have time (if the light’s not changing quickly), I view the scene or subject from every reasonable angle, and photograph every composition that seems promising – not just the one that I think might be the best at the time, because my field judgement about which composition might be the best could be wrong. My motto is, “Leave no compositional stone unturned.”

Recently Claudia and I were photographing a colorful patch of dogwoods near Highway 120, above Yosemite Valley. I’ve included four images here from that afternoon. Which is your favorite?

My favorite is probably the one at the top of this post. But in the field I didn’t think so. At the time, I thought I’d prefer this one: 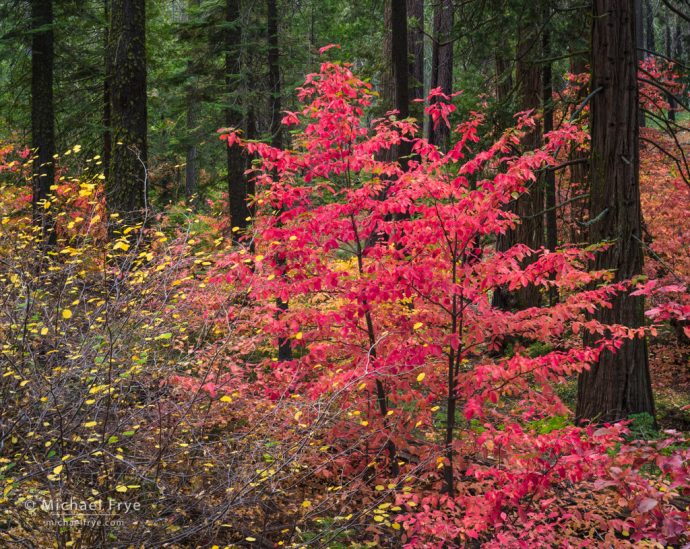 It’s the same group of trees, but from different vantage points with different lenses. It was already getting dark when I made that second image, with the breeze kicking up, so it would have been easy to call it a day. But as I worked my way back to the car I saw another possibility, and decided I should try it. That ended up being the photograph at the top of the post. I like that one a little bit better because, to my eye, it has better rhythm and flow.

You might prefer that second image, and that’s fine – it’s all subjective. The point is that if I hadn’t kept looking I wouldn’t have made the photograph at the top of the post, and wouldn’t have given myself the option to decide later which one I preferred.

Earlier that afternoon I saw this composition: 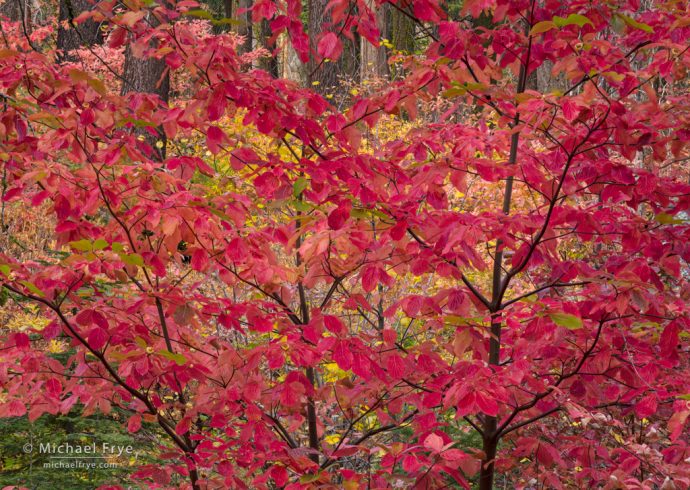 On the back of the camera, the foreground pattern of branches stood out distinctly, and looked pretty striking. But when I looked at it later, on a bigger screen, it didn’t seem to work as well. I think there are probably too many distractions in the background.

But I kept looking, and a short distance away I found this composition: 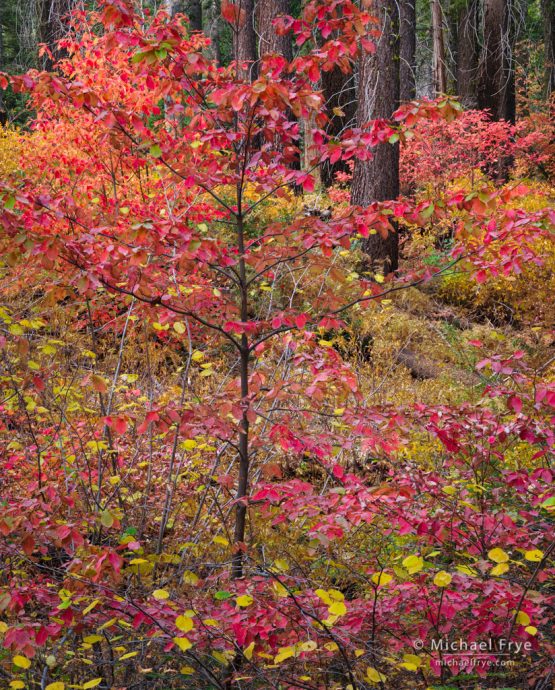 At the time I didn’t think much of this one, but it ended up being probably my second-favorite image from that day. It’s pretty busy, but it has a focal point (the stem of the dogwood just left of center), which helps to create a little order out of all the chaos. It’s a riot of color that maybe is just cohesive enough to avoid being too busy and visually confusing.

On that afternoon among the dogwoods I kept working and kept looking in order to give myself as many choices as I could. Because you never know for sure which ones you’ll like best when you review the images later.

P.S. Unfortunately, those higher-elevation dogwoods probably lost a lot of leaves in today’s wind. Meanwhile, it’s kind of a weird autumn in Yosemite Valley. We were in the valley on Thursday, and while there was some color, it was patchy. The big-leaf maples were about 40% yellow and 20% bare, while the rest, strangely, had turned brown. About half the black oaks were also brown, while the rest were a mix of green and gold. It looks like it might be a pretty good year for the cottonwoods, but they were still probably 70% green, so give them another week or two. And the dogwoods also need a bit more time, as they too have a lot of green leaves. (And keep in mind that the valley dogwoods don’t get the vivid reds that the higher-elevation ones do.)