A Beautiful Autumn Day in Yosemite 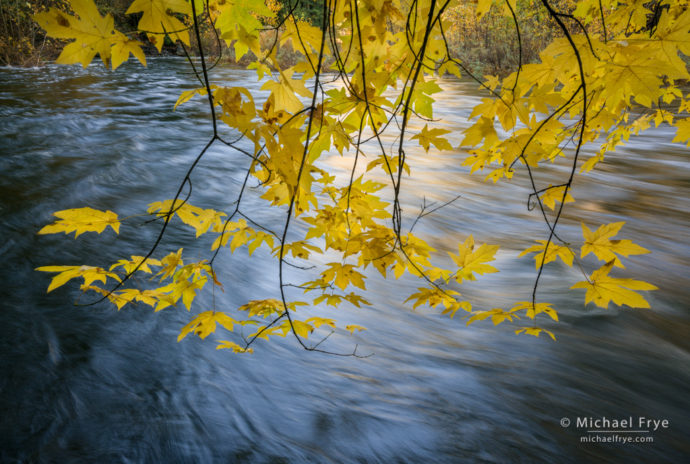 It was a wet weekend in Yosemite. From Thursday night to Sunday night Yosemite Valley received almost three inches of rain, and higher elevations probably got more.

Skies cleared Sunday night, so Claudia and I drove up to the valley early Monday morning, hoping to see fog, mist, and fall color. But what we found most striking was the water levels. It looked like spring, but with autumn color. The Merced River was ripping along, and the flat rock just above the old dam (the 120/140 junction) was completely submerged. The waterfalls were roaring. We didn’t find much mist, but there was a little fog in El Cap and Leidig meadows, and the sun created evaporation mist as it hit various spots on the valley floor.

We did find lots of autumn color, and the high river provided a rare opportunity to juxtapose colorful leaves against the water. I spent most of the morning looking for those juxtapositions, as in the photograph above and the first image below.

Although we had only planned to spend the morning in the park, it was such a beautiful day we couldn’t leave, so we got some lunch, took naps in the car, and continued photographing in the afternoon. We decided to drive up Highway 120 to check on the higher-elevation dogwoods, but when we got to the old dam we found that Highway 140 had been closed by a rock slide. That meant a much longer drive home, but since we had planned to go up Highway 120 anyway we decided to just continue out that way and go through Coulterville to Mariposa.

The dogwoods along 120 were still beautiful, and we stopped at one spot between the valley and Crane Flat (the second photograph below). Past Crane Flat we ran into fog — low clouds, really, as the cloud deck had lowered. There wasn’t much color around Crane Flat, but I kept my fingers crossed, hoping that the fog would continue further west, where I knew there were more dogwoods. And I got my wish. It was getting late by then, but I spent the last hour of daylight looking for compositions of dogwoods in the fog (as in the last photograph below).

Overall the color in Yosemite Valley looked great. Some big-leaf maples had lost their leaves, but most were vibrant yellow and near their peak. The cottonwoods produce the most variable and inconsistent autumn display of the deciduous trees in the valley, but it seems to be a good year for them, and a majority of them were yellow. The valley dogwoods were at least half green, so they won’t peak for another week or so, but some were quite colorful. The one valley deciduous tree species that seems to be having a poor year is the black oaks. About half of them have turned brown, while the other half have their usual golden-yellow autumn leaves and are near peak. It’s been a good year for the higher-elevation dogwoods, with many of them displaying vivid reds along highways 120 and 41. But they’re starting to lose their leaves, so they won’t last long.

We had a great day, and look forward to going back now that Highway 140 has reopened. It’s nice to know that autumn isn’t over, and we should still be able to find colorful leaves in the valley for another week or two. 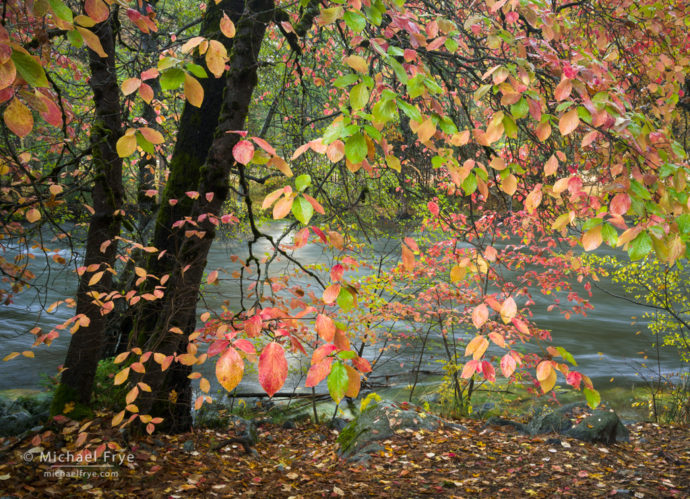 Dogwoods and the Merced River in autumn, Yosemite, Monday morning 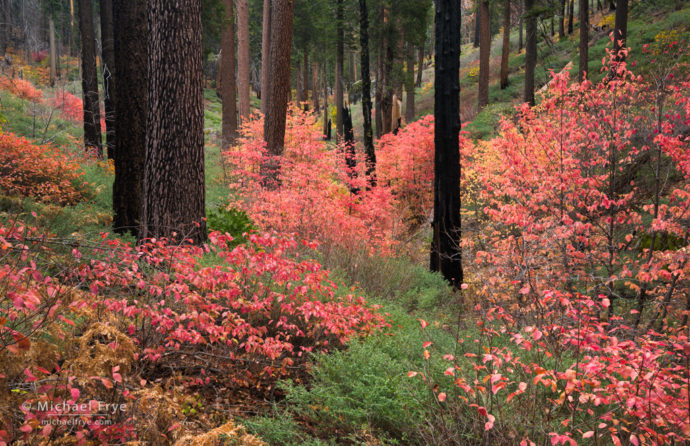 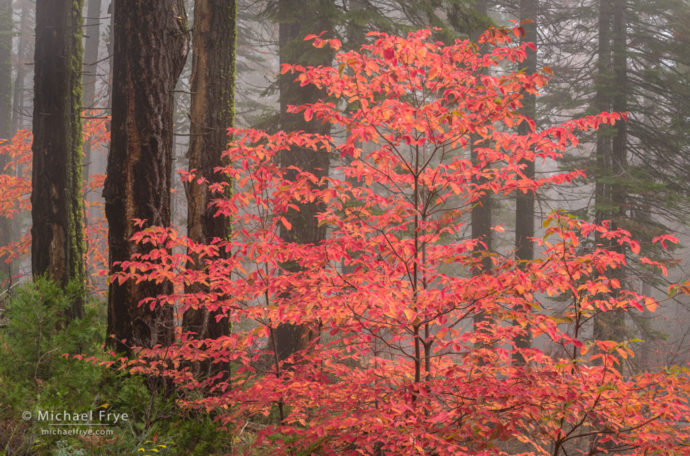 Dogwoods and firs in the fog, autumn, Yosemite, Monday afternoon along Highway 120

Related Posts: Autumn on the East Side; North Lake Sunset