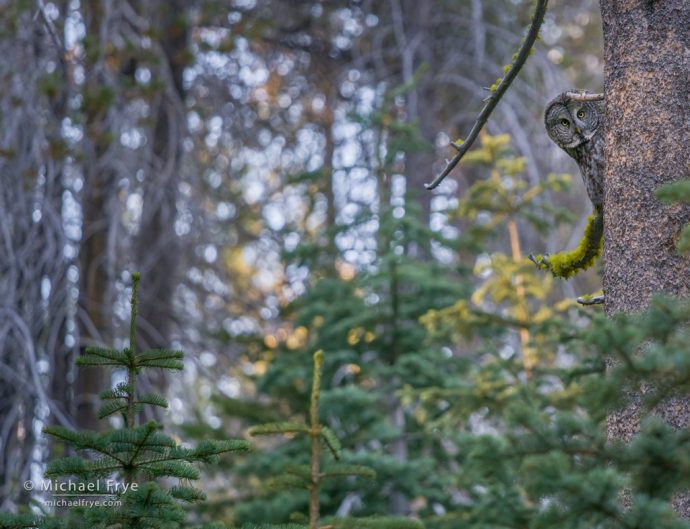 Great gray owl, Yosemite. This was what my first view looked like as the owl as craned its neck around the trunk and stared back at me.

Claudia and I have made several trips to the Yosemite high country recently to photograph flowers. We’ve mostly seen early bloomers like shooting stars, along with a few other species.

One afternoon we made a short hike to one of the high-country meadows looking for flowers. Whenever I’m near meadows in Yosemite between, say, 6,000 and 8,000 feet, I keep my eyes and ears peeled for great gray owls. These are the largest owls in North America, and typically live in boreal forests in Canada and Alaska. But some live in the Cascades and northern Sierra, all the way down to Yosemite, which hosts the southern-most population of these birds.

Great grays don’t just hunt at night; they sometimes hunt in the early morning and late afternoon. But despite their size and diurnal hunting habits they can be incredibly elusive. I’ve seen them about a dozen times in total, but mostly back in the late ’80s and early ’90s when I did a lot of wildlife photography. It had been at least ten years since I last saw one.

At one point, walking along the edge of the meadow, I heard jays and robins making a ruckus in the woods nearby. Smaller birds will often “mob” predators, like owls, to let everyone in the neighborhood know that there’s a dangerous character nearby. Sometimes it can be hard to distinguish such mobbing behavior from normal bird noises; jays, for example, often squabble with each other, which can sound a lot like jays mobbing a predator.

But on this occasion the birds were making such a commotion that there could be no doubt that they had found a predator. And given the habitat, I was 99% sure it was a great gray owl.

The woods between me and the mobbing birds, however, were full of fallen trunks and limbs, making it difficult to make a quiet approach. Then the sounds moved, following the apparent flight of the presumed owl. I zeroed in on the new location of the mobbing, further down the meadow. Claudia was photographing some flowers, and I asked her if she wanted to come with me. At first she hesitated, absorbed in her photography. I said, “Don’t you want to see a great gray?” She said, “Yes, I do,” and followed behind me.

Again I found a thicket of branches between me and the commotion. Then the calls changed, indicating that the owl was moving again, and this time I caught a split-second glimpse of a large bird flying through the trees.

Once more, Claudia and I followed the bird calls. By then the jays and robins seemed to be getting tired of harassing the owl, and by the time I zeroed in on the location there was just one lone robin chirping. But that was enough. Luckily this time the calls were coming from a spot closer to the meadow, and there was a small bay where the meadow extended up into the forest. I moved slowly, scanning the trees carefully. I found the robin about 30 feet up in a tree, and knew that the robin would never position itself below the owl, so the owl had to be even lower. And close by.

Moving slowly, scanning the trees, I spotted a dark shape next to a trunk. I raised my binoculars, and saw a great gray owl craning its neck around the trunk, staring right at me. Damn, what a sight.

I motioned for Claudia to come join me, and pointed out where the owl was. She whispered, “I see it! It’s looking right at us!”

At first I was content to just look. But then I decided to get out my camera. I only had a 200mm lens, and the light wasn’t great, but at least I could document the sighting. I took a few photos as the owl stared back at me. It looked down, focusing on a sound below, looked back at me, then looked down again. I gradually moved a little closer, but my path then became blocked by a shrub. We probably watched the owl for about 15 minutes before it flew a short distance to another tree. Here’s Claudia’s video of that moment:

We could have followed the owl to its new perch, but decided to leave it in peace. It was starting to get dark anyway.

The photographs turned out better than I expected (though they needed considerable cropping). But that was secondary. Just seeing the owl made our day, if not our whole week. What a thrill.

P.S. Here’s another great gray owl photo that I made in 1986 with a 300mm lens and 35mm film. I had seen my first ever great gray owl two days earlier in this same area. The night before I made this photograph I had a dream in which I was photographing a great gray owl surrounded by branches covered with staghorn lichen. The next morning I found this owl hunting along the edge of a meadow. It flew to another nearby small meadow, and I followed it. I slowly worked my way along the edge of this small meadow until I spotted the owl. I crept along, trying to get a better view, with my camera on my tripod, at the ready. Then I stopped in my tracks, as I realized that from where I was standing the owl was surrounded by branches covered in staghorn lichen – just like in my dream. 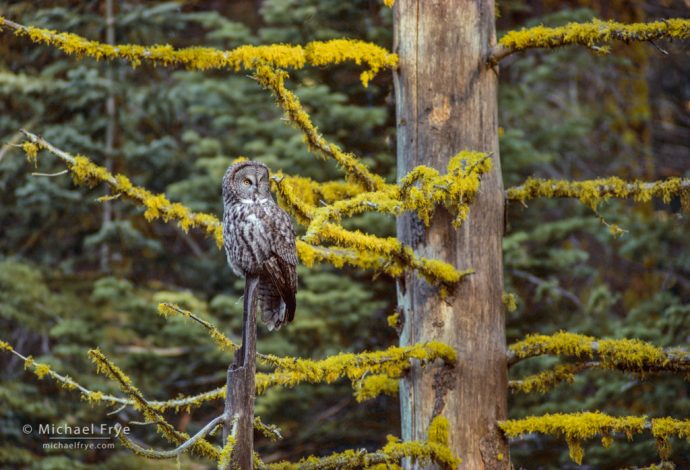