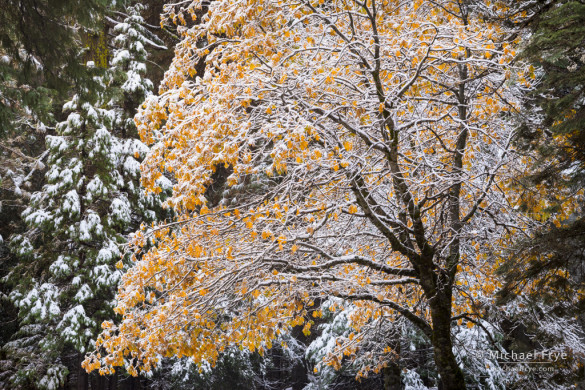 I’m in Dallas today teaching a Lightroom workshop for the Sun to Moon Gallery. We have a nice group of people and we’re having a great time, but meanwhile, back in Yosemite, another storm is arriving. I won’t get to photograph this one, but did get to photograph the previous one last Monday and Tuesday.

That storm featured a brief, misty clearing on Monday morning, a dusting of snow on Monday night, and a couple of surprises. It began on Sunday night, but early Monday morning the satellite and radar images showed that there might be a break around sunrise before more precipitation arrived that afternoon. So I drove up to Tunnel View early, and sure enough, it did clear. It wasn’t the most colorful sunrise, but there was plenty of beautiful mist, as you can see in this photograph: 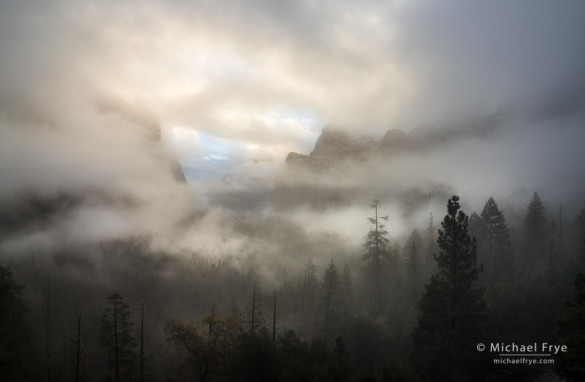 Then I headed down to the valley, photographed some more misty scenes near the Ahwahnee Meadow, and as I was walking back to my car heard the agitated chatter of small birds coming from a nearby group of trees. From my years photographing wildlife in Yosemite Valley I thought that probably meant that these birds had found a pygmy owl. Pygmy owls often hunt during the day, and their prey sometimes includes small birds, so when the birds find a pygmy owl they’ll “mob” it, surrounding the owl and making a big racket so that every bird in the area knows where the owl is.

It took awhile, but I finally spotted a well-hidden owl about ten feet up in a small incense cedar, sleeping. I approached within 15 feet, and the owl seemed completely unconcerned. I spent about 20 minutes photographing it, and only once did it open its eyes, slightly – a moment captured in this photograph: 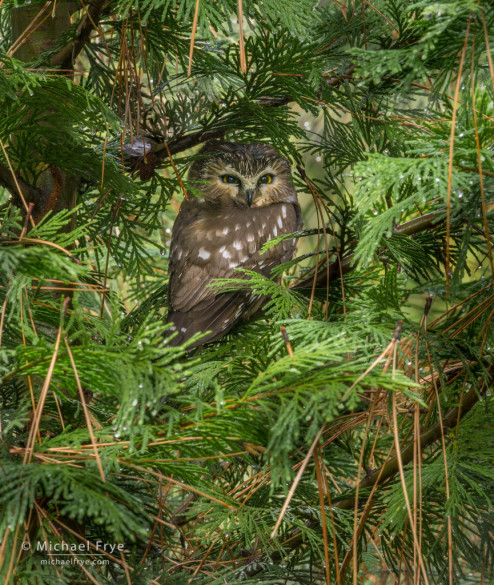 Rain returned Monday afternoon, then turned to snow in the evening, leaving about two inches on the valley floor. I made another early-morning trip to valley, and this time Claudia came with me. The storm had cleared during the night, leaving skies clear for several hours, and temperatures below freezing. That meant there was no mist, as mist requires liquid moisture in the atmosphere. But it was great to see snow in the valley – the first snow of the season.

We drove around the valley looking for trees with fall color and snow. Somewhere along Southside Drive I spotted a patch of orange in the forest. At first I thought it was a cone or flag, but then I realized it was fire! The park service had set a prescribed fire in that area a few weeks earlier, and apparently it wasn’t completely out yet, despite the rain and snow. A log was still burning, surrounded by snow. Claudia asked if I wanted to stop. Yes!

It turned out that the fire was burning inside a hollow log. With the log surrounded by snow, it looked like a natural, outdoor fireplace. And just like a fireplace, it warmed us up on that cold morning. Here’s one of my photographs, along with Claudia’s iPhone video: 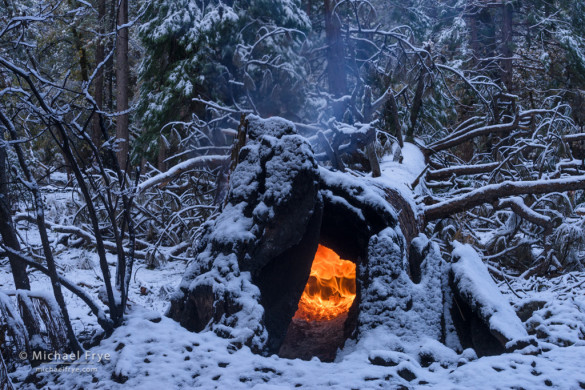 We did eventually find some of those snow-covered autumn leaves. The image at the top of this post shows an oak with unusually vibrant colors (for this year), and you’ll find more photographs with snow and fall color below.

Those splashes of color were rather scarce on Tuesday. We were surprised to see so many deciduous leaves that were still green – on November 10th, after a dusting of snow. The dogwoods were still mostly green, though a few had almost completely turned, finally. The maples were a mix of bare, green, and a little yellow. We saw many green oaks as well, along with a few that had good golden-yellow color, and a bunch with muted brown leaves, or a mix of brown and green and gold.

With all those green leaves, we could see some fall color for several more weeks in the valley. But it’s such a strange year that it’s hard to tell.

In the meantime, the storm today is predicted to bring rain at first, but then the snow level is expected to drop down to valley floor level (4,000 feet) at the tail end, possibly dropping another dusting of snow. Since I’m not there, I’m counting on some of my readers to capture it. Please post a link to your photos in the comments, and show me what I missed. 🙂 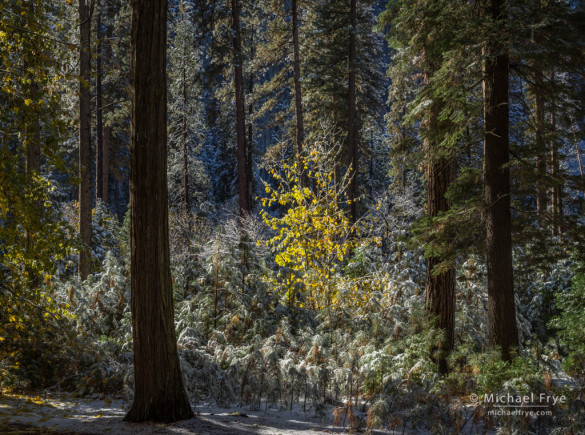 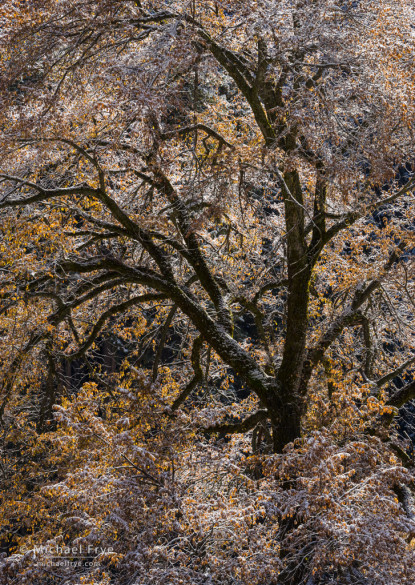 Elm tree in autumn after a dusting of snow, Yosemite, Tuesday morning