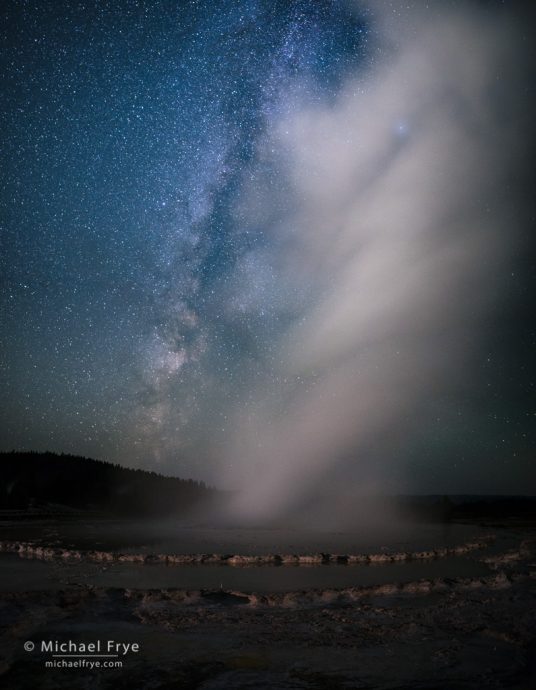 Great Fountain Geyser and the Milky Way, Yellowstone NP, WY, USA. I photographed this geyser two nights in a row. On the first night I joined another photographer from Florida, but on the second night I miraculously had it to myself. This is the one image in this post where I used my own lighting, using two LED panels to add subtle illumination to the geyser and its beautiful terraced pools. This photograph is a stitched three-frame vertical panorama, captured with my 20mm Rokinon lens. Each exposure was 20 seconds at f/2.5, ISO 6400.

Next to Yosemite, Yellowstone might be my favorite national park. But I hadn’t been to Yellowstone since 2003 – way too long! So after watching and photographing the eclipse in Idaho, Claudia and I decided to head to Yellowstone. We started in the remote, quiet, beautiful, southwest corner of the park, near Cave Falls, an area we’d never been to before. Then we moved into the Madison campground, where, miraculously, we had been able to secure a last-minute reservation.

Since it had been so long since our last visit we played tourist a bit, watching Old Faithful erupt one afternoon, and making the journey to Artist Point above the Grand Canyon of the Yellowstone. There were lots of people in the park. It was August, after all, but it didn’t seem that busy 14 years ago, even in summer. We got stuck in an hour-long bison jam in Hayden Valley.

But in the evenings the park emptied out. We watched Grand Geyser erupt late one afternoon, with a modest crowd of people on hand. (Claudia posted a great video on Facebook of the geyser and crowd reaction.) And after sunset we practically had the park to ourselves, save for a few other photographers.

On my previous visits to Yellowstone I had become fascinated with geysers. I studied the bible on the subject, T. Scott Bryan’s The Geysers of Yellowstone, and learned about the character and quirks of the major geysers (and some minor but photogenic ones as well). And in the late ’90s I photographed geysers at night with medium-format film and a large, battery-powered flash. But I wanted to try photographing geysers with new techniques, a modern digital camera, and 20 years more experience.

Claudia and I got a late start, arriving at Geyser Hill a little before 10:00 p.m. But it didn’t look like Beehive had erupted yet, as the boardwalk next to it was dry. It was difficult to find a composition that didn’t include the lights and buildings surrounding Old Faithful, but I finally found a view that worked, with the boardwalk as a leading line.

And just in time. As soon as I found this composition Beehive started erupting. The lights from the Old Faithful Inn and Lodge illuminated the geyser perfectly: 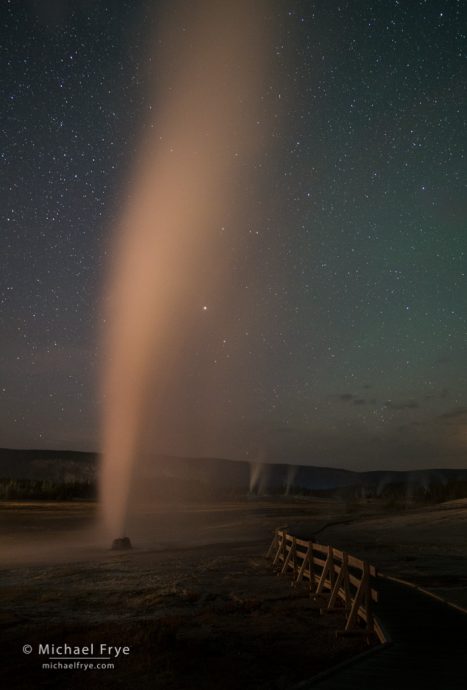 In all I spent four nights photographing the geysers and thermal areas in Yellowstone. Although I almost always add my own lighting to nighttime photographs, in Yellowstone I mostly just used starlight and moonlight, along with the lights from the buildings near Old Faithful, and an occasional car headlight. You’ll find extended captions with the images below to explain how they were made.

Watching a geyser erupt by starlight is an indescribably beautiful and serene experience. Once I waited for Great Fountain Geyser with another photographer from Florida, and sometimes Claudia was with me. And I ran into two photographer friends, Jeff Sullivan and Lori Hibbett, at Grand Prismatic Spring. But often I was completely alone, with Yellowstone’s chief attractions all to myself. What a treat.

And I renewed my love affair with geysers. They’re endlessly fascinating, and I don’t seem to get tired of watching or photographing them. I’ll be back.

P.S. Beehive was the first geyser our son Kevin ever saw. On his first trip to Yellowstone in 1997, when he was not quite seven years old, Beehive was erupting regularly every 12 hours (it’s usually more erratic). Our first afternoon in the park that year we went to the Old Faithful Visitor Center, and their geyser-precition board showed that Beehive was due to erupt in 30 minutes. That left just enough time to climb up Geyser hill to see it. As Beehive erupted we stood about 50 feet away on the boardwalk, watching the water pulsing 180 feet over our heads for a solid five minutes. Kevin had little appreciation for lesser geysers after that. He was completely unimpressed when we later viewed Old Faithful, which averages a “mere” 145 feet high, sustains its maximum height for less than a minute, and has to viewed from a much greater distance. Any time we went to view a geyser after that he would ask, “Is it like Beehive?” Well no, not many geysers are like that. He still remembers Beehive 20 years later. 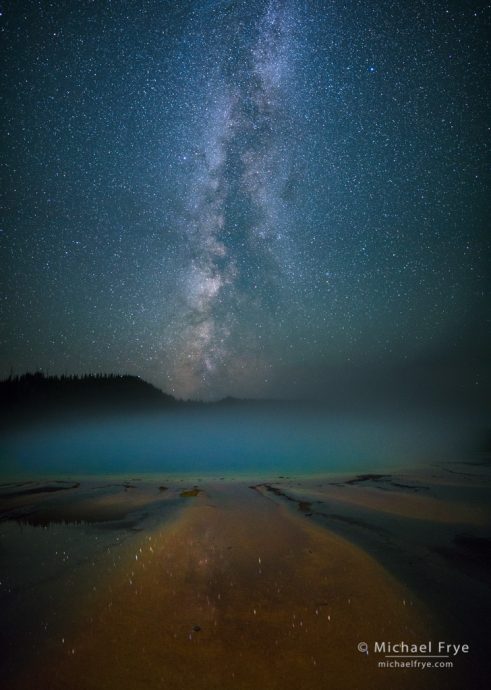 Milky Way over Grand Prismatic Spring, Yellowstone NP, WY, USA. I was surprised that the camera could capture the amazing colors of this spring just by starlight. Another vertical panorama, stitched together from four frames made with my 20mm Rokinon. Each frame was 20 seconds at f/2, ISO 6400. 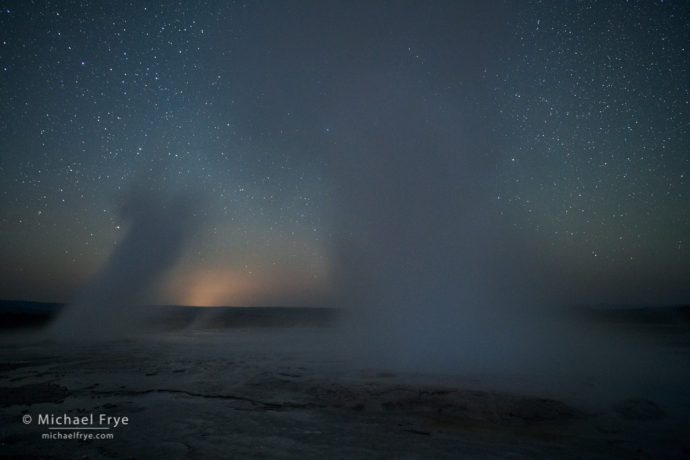 Fountain and Clepsydra Geysers erupting at night, Yellowstone NP, WY, USA (Fountain is on the right). After photographing the setting moon I walked out to photograph Clepsydra Geyser, which erupts almost continuously. But I was surprised to find Fountain Geyser erupting as well. 20mm, 20 seconds at f/2.5, ISO 6400. 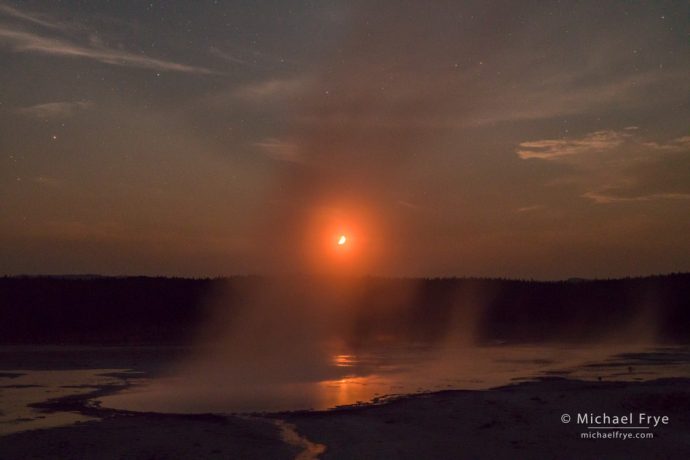 Celestine Pool and the setting moon, Yellowstone NP, WY, USA. On our last night in Yellowstone I photographed the half moon setting through the mist of this spring (and occasional geyser). 50mm, 8 seconds at f/5.6, ISO 6400. 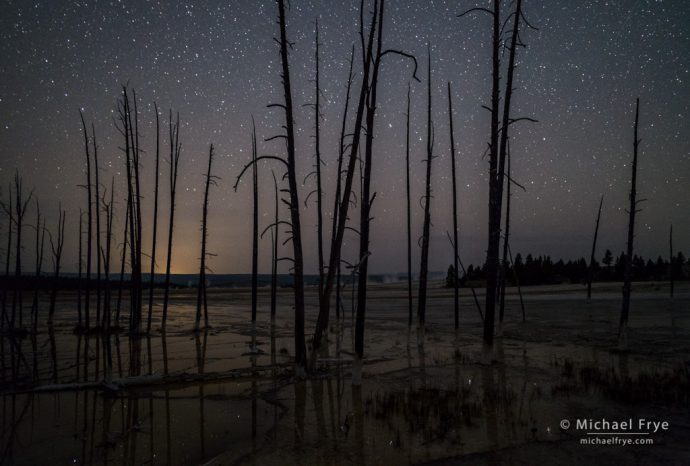 Trees and stars, Lower Geyser Basin, Yellowstone NP, WY, USA. I liked these trees silhouetted against the starry sky, with reflections of both in the water below. 20mm, 20 seconds at f/2.5, ISO 6400.