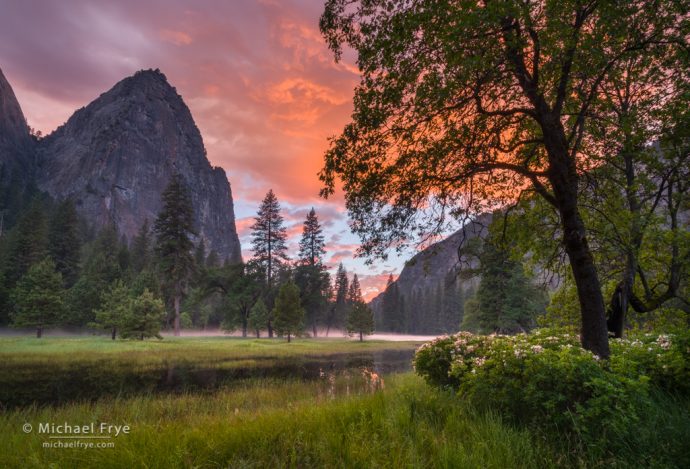 Last Sunday, after the double rainbow from Tunnel View faded, Claudia and I headed down to El Capitan Meadow. We had explored this meadow earlier in the afternoon and found azaleas still blooming (though most were past peak). I hoped to photograph the azaleas again in better light, maybe with a sunset above.

By the time we got to El Cap Meadow the sky was already starting to get interesting, so I had to hurry. My previous explorations gave me a head start, but I still had trouble finding a good composition that included azaleas, the sky, and, preferably, Lower Cathedral Rock. There was also some mist along the Merced River in the distance, and ponds reflecting the sunset, so I wanted to include those elements too, if possible.

But that was a lot. An awful lot. In talking about composition in my workshops and books I always stress simplicity, because I think the single most common mistake in photography is including too much in the frame. I tell people to ask themselves what caught their eye in the first place, and to include just that, and nothing else. And try to focus on just one or two things. If you attempt to include three or more main elements in your photograph you’re likely headed for trouble. All those different objects will probably compete with each other, rather than complement each other, and nothing will stand out.

I think that’s all good advice, and I follow it myself most of the time. But sometimes I try to push the boundaries. While I like simple, clean compositions, I’m even more partial to photographs that are rich and complex – as long as they don’t cross the line and become busy and confusing. As the great Sam Abell put it, “What we’re all trying to do is make a layered, deep, complex, complicated photograph that doesn’t look complex or complicated.”

So back in El Cap Meadow, I was definitely pushing things by trying to include azaleas, the sunset, Lower Cathedral Rock, mist, and reflections in one frame. I knew the odds of succeeding were small, but I still wanted to try. And if I couldn’t find the composition I was looking for I could always try something simpler.

It took a lot of searching – and some trial and error – to find the composition above. Initially I was on the other side of the clump of azaleas in the lower-right corner of that image. But even from the other side that clump of azaleas caught my eye, and I decided to navigate around the flowers to see if I could juxtapose them with the sky and Lower Cathedral Rock.

Initially I didn’t want to include the oak tree above the azaleas, as that would just add to the clutter. So I walked right up to the flowers underneath the oak, and tried to include the azaleas, the water and reflections beyond them, and Lower Cathedral Rock. But it just didn’t work. I would have needed a tripod that went two feet higher so I could look over the azaleas to see the water, yet still include the flowers in the foreground.

So I turned around, looking for some higher ground, and saw a slightly-elevated perch underneath another tree. I knew that I’d have to include the oak above the azaleas from that vantage point, but I thought it was worth a try. When I got to that spot I saw that the oak above the azaleas had a nice shape, so it might work. The azaleas would become a small part of the picture, but still visible, so that might be okay too. And I could clearly see Lower Cathedral Rock, as well as the mist in the distance, and a little bit of the sky reflected in the pond. Most importantly – and luckily – I could get separation between the left-most branches of the oak and the pines next to Lower Cathedral Rock.

I had to use my widest lens – 16mm – to fit everything in (and then just barely). The contrast was extreme, so I bracketed five frames, two stops apart (at f/16, 100 ISO), and blended them together with Lightroom’s HDR Merge.

The final image is certainly complex, with many different things competing for attention. Yet all the important elements stand out clearly, and I think (and hope) the photograph “reads” well, and hasn’t crossed that line into becoming too busy and confusing. It’s definitely near that edge though.

After capturing several bracketed sequences of that scene I hurried to another part of the meadow to see if I could find a different composition before the sunset faded. After a bit of searching I found the composition shown below. This includes many of the elements I was looking for: the azaleas, the sunset sky, the mist, and reflections in a pond. But I couldn’t fit Lower Cathedral Rock into the picture. It was just out of the frame to the left, and I was already at my widest focal length (16mm), so it was all I could do to fit the azaleas and the sunset sky into the photograph. And besides, there was a tree in front of Lower Cathedral Rock from this angle: 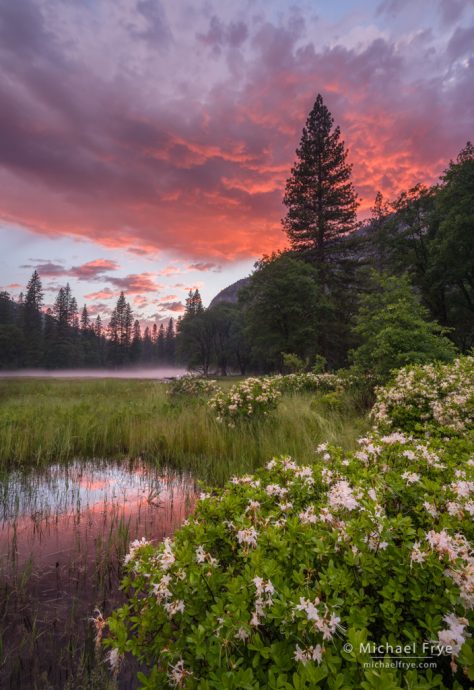 This second image is simpler than the first, and the azaleas are more prominent. And yet I still probably prefer the first image (at the top of the post). Having Lower Cathedral Rock in the frame helps give that first photograph a sense of place, but more importantly, I like it’s richness, complexity, and sense of depth. But it’s a close call for me. Which do you prefer?

In composition, simplicity and complexity actually go together. The more complex a photograph becomes, the more important it is to strive for simplicity – to eliminate all but the most essential elements, and make sure that all those potentially-competing items stand out clearly, and flow together. I think the best way to learn how to make a “layered, deep, complex, complicated photograph that doesn’t look complex or complicated” is to practice making clean, simple compositions. Once you can do that consistently, only then can you add more complexity while still keeping your message clear.