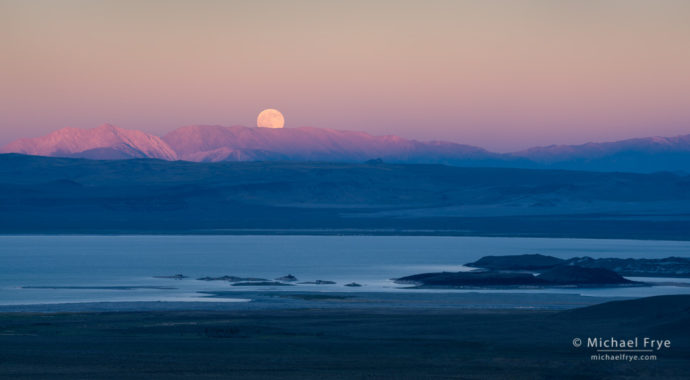 Moon rising above Mono Lake and the White Mountains at sunset, CA, USA

We had a wonderful time during our workshop in the Sierra high country last week. The locations around Tuolumne Meadows, Tioga Pass, and Mono Lake are some of my favorites, and we had a great group of people to share them with. We also had several opportunities to photograph the rising and setting moon above these striking landscapes.

In this previous post I wrote about some of the common misconceptions about photographing the full moon. For example, many people assume that full-moon photographs are taken at night, but in fact most are taken at sunrise or sunset when the light of the moon and landscape are in balance. And it’s often better to take these photographs on the days before or after the actual full moon, not when the calendar says “full moon.” That post helps explain some of the gyrations of the sun and moon so you can understand the best times to photograph the moon above a landscape. There are also some excellent apps that can help you pin down precisely where and when the moon will rise and set. The best of these are PhotoPills and The Photographer’s Ephemeris, and I used both to figure out where and when to take our group during the workshop.

The photograph above was actually taken on the date of the full moon, but that only worked because we had a high vantage point where the moon would rise above the distant mountains before the sun had completely set. The exposure for that scene was relatively easy, because the moon and the mountains were both lit by the sun as the moon was rising and the sun was setting behind us. The exposure was also relatively easy for the photograph of Mt. Conness and North Peak below, because again both the mountains and moon were lit by the sun (this time at sunrise as the moon was setting). The exposure for the image of Teneya Lake below was a bit more difficult, because it was taken a little before sunrise, with that pink, pre-dawn glow in the sky to the west. In that case the moon was much brighter than the landscape, so I bracketed exposures and used Lightroom’s HDR Merge to get detail in both the moon and the mountains.

Although exposures for moonrise and moonset scenes can be challenging, they’re not that difficult, and the software tools for processing high-contrast scenes have gotten much better. And apps like PhotoPills and The Photographer’s Ephemeris have made it much easier to plan when and where to photograph these events. There’s a bit of a learning curve with these apps, but their websites have excellent tutorials, and the payoff is worth the effort. The moon can add a sense of mystery and timelessness to a landscape, and elevate an otherwise ordinary scene into something special. 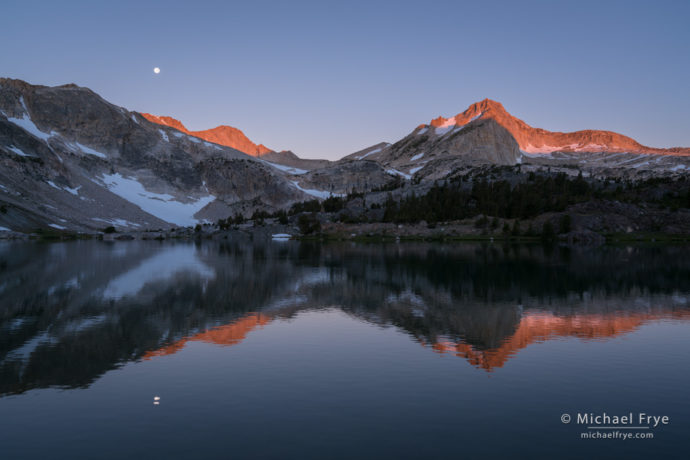 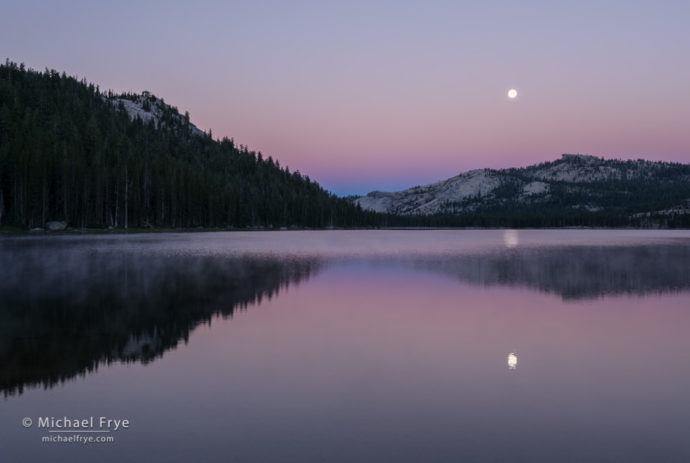