A Different Point of View 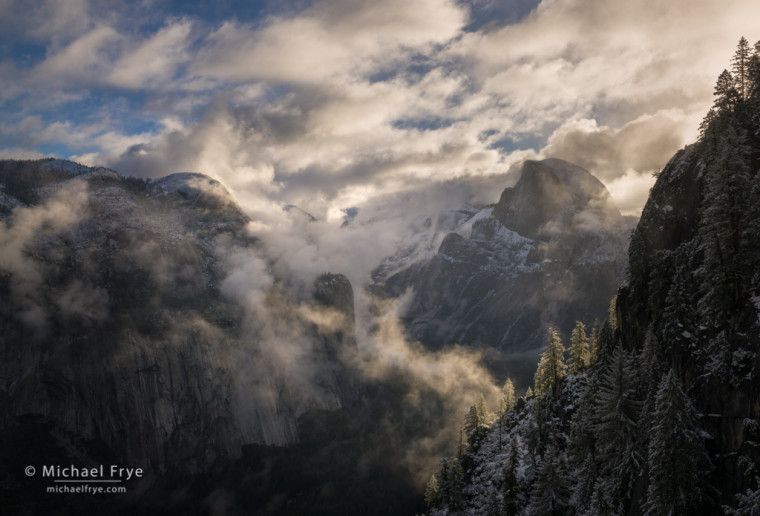 Half Dome and North Dome at sunrise from the Four-Mile Trail, 8:07 a.m. Tuesday morning

A small storm rolled through Monday night. The showers tapered off during the wee hours Tuesday morning, and I rose early, hoping to once again photograph a clearing storm in Yosemite Valley.

The moon was nearly full, and I actually got to the valley early enough to capture some images of the clearing storm by the light of the setting moon. Then some clouds moved in. I looked at the radar images on my phone, and saw a band of showers approaching. It looked like the showers would reach me around sunrise, and pass through pretty quickly. Hmm. I might have just enough time to hike up the Four-Mile Trail to a spot with a view of Half Dome that I’d been wanting to try.

It would be a gamble. Staying near the roads on the valley floor would give me more flexibility; I could wait to see what happened with the weather, and within five or ten minutes be at one of my favorite, familiar locations. But on this morning I wanted to try something different, so I decided to take a chance and go for it.

I hoofed it up the trail as fast as my legs and lungs would allow. The anticipated showers never materialized, and the skies started clearing earlier than I expected, which meant I might reach my spot too late to catch the best light. I thought about turning around, but decided to roll the dice and see what happened. My rationalization was that the trail has good views toward Cathedral Rocks and El Capitan to the west, and Yosemite Falls across the valley, so if the skies cleared before I reached the view of Half Dome there were other possibilities.

I did stop briefly to photograph the view down the valley to the west, but then kept going up. The sun broke through and lit the cliffs to the west of Yosemite Falls, but the light wasn’t compelling enough to make me want to stop. Upward!

When I finally reached the view of Half Dome at about eight o’clock I found a gorgeous scene, with backlit mist, clouds, and trees coated with a dusting of snow. I was glad I had persevered. The light and mist show continued for about half an hour, but my favorite image is the one at the top of this post, made just after I arrived. Apparently I got there just in time.

When the light became less interesting for that view I moved down the trail to photograph Yosemite Falls. The sun had reached the waterfall by then, and mist kept forming and rising, hiding and revealing parts of the waterfall. I’ve included a couple of those images below.

They say that familiarity breeds contempt, but that hasn’t been my experience with Yosemite Valley. I’ve lived in and near the valley for over 30 years, and haven’t grown tired of photographing it. If anything, my familiarity with the valley has made me look more deeply, and forced me to become more creative in my interpretations. I know there are many beautiful, intimate compositions that I haven’t discovered yet. Changing weather, seasons, and conditions are always creating new possibilities for both large and small scenes. Recent advances in camera technology have allowed me to capture images of clearing storms and other interesting lighting events after dark.

And there are many wonderful views of the valley that I haven’t photographed before – or at least I haven’t photographed those views in prime conditions, like during a clearing storm. It’s hard to do that, because reaching those spots requires hiking, which takes time and effort. As this little story shows, it’s a gamble. I could spend a lot of energy climbing up a thousand feet or more above the valley, only to realize that I would have been better off going to Tunnel View. That’s happened to me more than once.

But it’s not all about the results – about “getting the shot.” For me, it’s fun to be up and away from the crowds, seeing the valley from new perspectives, with interesting and unusual weather conditions, even if I don’t come home with any outstanding photographs. I’ve been skunked before, many times; that’s a normal part of landscape photography. For me – and, I know, for many other photographers – the effort to capture an image is partly just an excuse to get out there.

But photography is also about communication, so if the light and weather cooperate, and I can share a photograph that conveys a tiny bit of the beauty of these out-of-the-way places, that’s even more satisfying. I came down the trail on Tuesday tired, but happy. It was such a wonderful morning, an experience I’ll remember for a long time.

P.S. This should go without saying, but you shouldn’t attempt to climb up out of the valley under inclement weather unless you’re in good physical condition and have a lot of experience hiking in the mountains. And that goes double (or triple) if you’re hiking off-trail. There was very little snow below 6,000 feet on Tuesday, but normally in winter you should expect to encounter snow and ice on the trails. Rockfalls and avalanches are more common after storms, so you should be able to recognize rockfall and avalanche hazard zones and avoid them. And of course you should obey all the rules, including closures. (The Four-Mile Trail, for example, is typically closed just below Union Point in winter, but sometimes it’s closed below that.) And hiking alone is not recommended. I’m a very experienced hiker and mountaineer, and when Claudia doesn’t come with me on these ventures I text her regularly to let her know where I am. (AT&T cell coverage is surprisingly good on some of the trails around Yosemite Valley.) 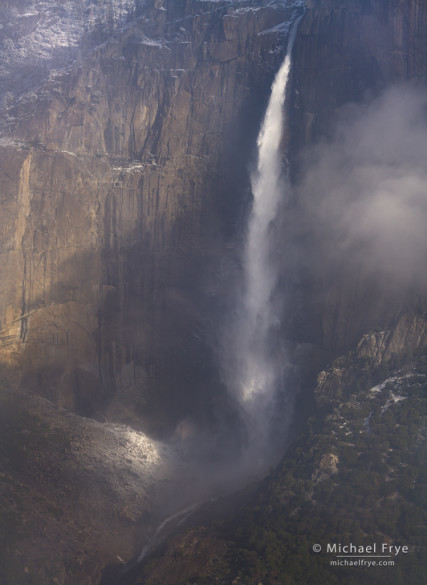 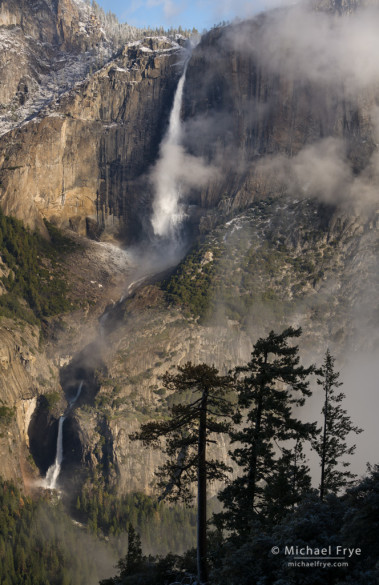