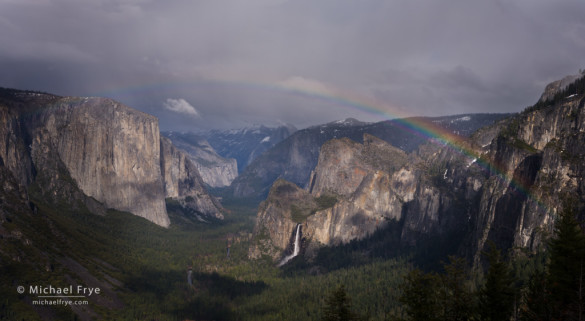 Rainbow over Yosemite Valley from near Old Inspiration Point, Yosemite

On Easter Sunday the forecast called for showers and thunderstorms, with a 100% chance of rain. So I decided it would be a great day to hike 6 miles and climb over 2,000 feet up to Old Inspiration Point.

I could have just gone to Tunnel View. Tunnel View is a wonderfully photogenic spot, where I could have waited out any rain showers in the car, then walked 50 feet to the viewpoint if something interesting happened. And if the light didn’t cooperate, well, no big deal – it wouldn’t be the first time I’ve struck out at Tunnel View, and it wouldn’t take much effort to come back and try again.

On the other hand, I have lots of photographs from Tunnel View, and every other easily-accessible viewpoint in Yosemite Valley, but I’d never been to Old Inspiration Point. And I was in the mood for an adventure. I asked Claudia if she wanted to come with me (carefully explaining what she might be in for, I swear), and she said sure. She’s always up for a hike.

We started from the Tunnel View parking lot at about 1:00 p.m., with snowshoes strapped to our packs in case we encountered deep snow up higher. There were, surprisingly, quite a few people on the Pohono trail; it was Easter Sunday after all.

Inspiration Point, or New Inspiration Point, isn’t so inspiring anymore, since it’s become overgrown with trees and there’s no view. But there’s a spot several switchbacks lower, off a little unmarked spur from the main trail, that has a great vista. It’s similar to Tunnel View, but almost 1,000 feet higher. When we reached this point there were some interesting clouds, and we needed a rest, so we stopped to take a few photographs. Here’s one, just to show you what this view looks like: 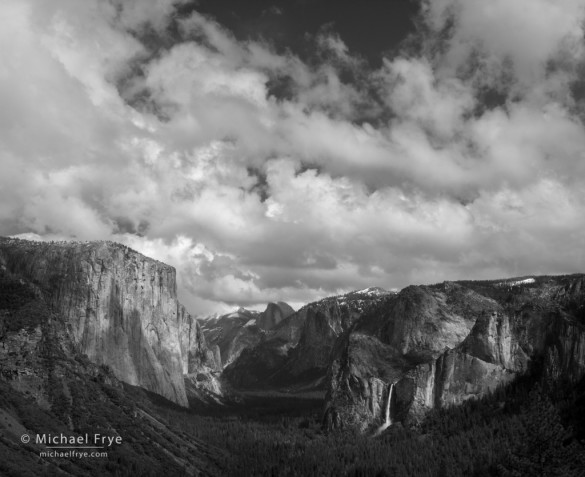 We didn’t see any other hikers beyond overgrown New Inspiration Point. As we climbed higher, we encountered some rain showers. As we approached Old Inspiration Point we heard distant thunder, and we had to reconsider our plan of going to a high, exposed spot. But luckily we found another, less-exposed point nearby with a great view. As we neared this location the sun broke through, and a full rainbow appeared over Yosemite Valley, but by the time I found a good view and set up my camera the rainbow had faded. Then, ten minutes later, the rainbow reappeared, and I captured the photograph at the top of this post.

As the showers came and went we saw two more rainbows, and some beautiful dappled light. Then the clouds became thicker, and darker, and the rain more persistent. I kept thinking that the sun would break through again, but it never did. Just before sunset though I captured the photograph below with one high cloud lit by the sun, and a rain squall over Yosemite Valley.

It was a long hike down in the dark with headlamps, but we were happy. We were lucky that our efforts were rewarded with some good light. More importantly, we had a great adventure, and saw a new perspective on this valley that we both know so well and love so much. Watching the changing clouds, light, and rainbows from this high vantage point made me feel as if I was seeing Yosemite Valley for the first time.

I’ll be going back, despite the long climb. Maybe I’ll actually make it to Old Inspiration Point proper next time. And I’ll try to think of other harebrained ideas; it’s fun to try something new. 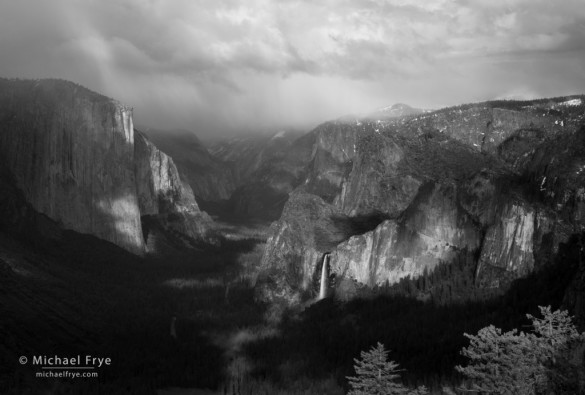 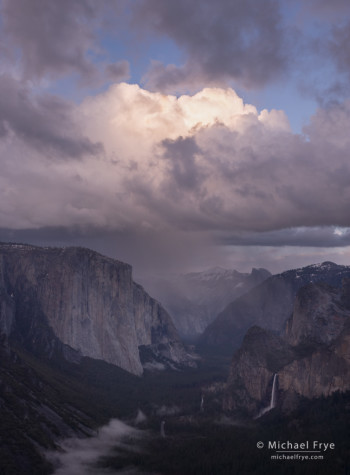