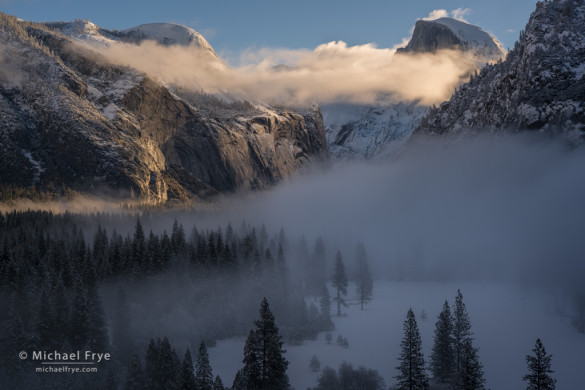 I’m so grateful for all the rain and snow we’ve been getting. After four years of drought, it’s wonderful to have a normal, wet winter. We’ve had storm after storm, and although most of the recent ones have been small, they add up. Yosemite Valley has received 24.63 inches of rain since July 1st, which is well above average. Badger Pass, at 7,200 feet, has 60 inches of snow on the ground, and the deepening snowpack raises hopes of full waterfalls this spring.

All this weather has been great for photography. It seems like we’ve already had more snow and clearing storms this season than the last four winters combined.

The latest in the series of small storms came through on Thursday night. I didn’t pay much attention to it, because it was predicted to be a weak system, and a warm one. I happened to wake up at about 4:00 a.m. Friday morning, and checked the radar images on my phone. It was raining pretty hard at our house, but the radar showed that the precipitation might end soon, possibly right around sunrise.

That got my attention. Any clearing storm can be photogenic, but one that breaks up around sunrise or sunset has even more potential. I was suddenly wide awake.

The radar also showed snow, rather than rain, in Yosemite Valley. And the temperature in the valley was 32 degrees, which was cold enough for snow. But the park’s road and weather information line indicated that there was no chain control in the valley, and highways 120 and 41, both of which go all the way up to 6,000 feet in elevation (2,000 feet higher than the valley) were only R1 – chains or snow tires required.

Hmm… Yosemite Valley had received over three-quarters of an inch of precipitation at that point. That should translate to some four to six inches of snow at 6,000 feet – maybe more. Even a couple inches of new snow usually prompts the ultra-cautious park service to post R2 chain controls – chains for four-wheel-drive required. The R1 designation is used only when there’s a little slush on the road.

Something didn’t add up, but a clearing storm near sunrise was worth driving up there for, even if there was no new snow in the valley. Further checking of online satellite images confirmed that there was a good chance that the skies would clear soon, so I made some breakfast and got ready to go.

It was still raining hard when I left my house, but as I drove toward the park the rain stopped, and I saw stars several times through rifts in the clouds. Upon reaching Yosemite Valley I found lots of mist, with clear skies above, but no new snow, and my car’s outside thermometer read 35 degrees. Even at Tunnel View there was no snow in the trees – only some slush in the road.

Tunnel View looked like it would be socked in for awhile, so I decided to check the east end of the valley. If the online temperature gauge was right, it was colder there, so maybe there would be new snow. And sure enough, as I passed El Capitan I saw a slight coating of snow in the trees. As I drove further east the snow increased, with about two or three inches of new snow near Yosemite Village.

In any case, it seemed like a good day to be in the east end of the valley. I climbed up a rough, boulder-strewn talus slope to a familiar spot with a slightly elevated view over the east end of the valley. The footing on those loose rocks is difficult even when they’re dry, but even more treacherous covered with six to eight inches of old and new snow. I took my time and made it up safely.

Half Dome stayed hidden in the mist for awhile. I saw a few tantalizing glimpses, but each time the fog would close in again. Finally, at about eight o’clock, Half Dome came out for good. Waves of fog rolled over the valley floor below, alternately hiding and revealing trees and meadows, and adding a beautiful misty mood to the scene.

Eventually the mist near Half Dome dissipated, but there was still fog swirling over the valley floor. I concentrated on photographing more intimate scenes of misty trees, and hung around long enough for the sun to climb up over the south rim of the valley and light the trees below.

Fog, mist, fresh snow, and a storm clearing just after sunrise – what more could you ask for? I’m glad I woke up and checked the weather! 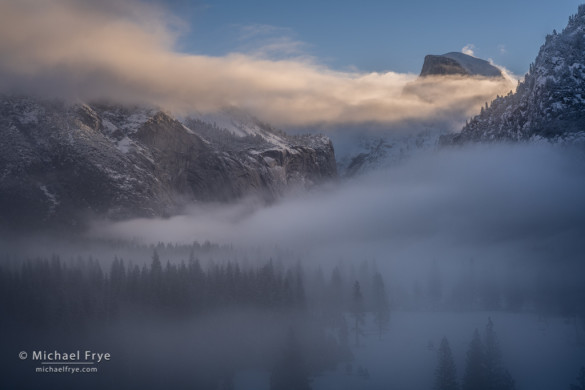 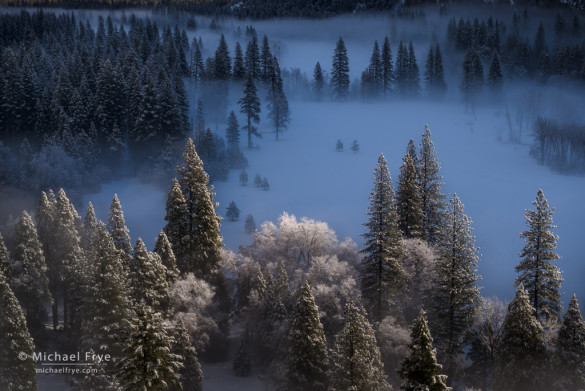 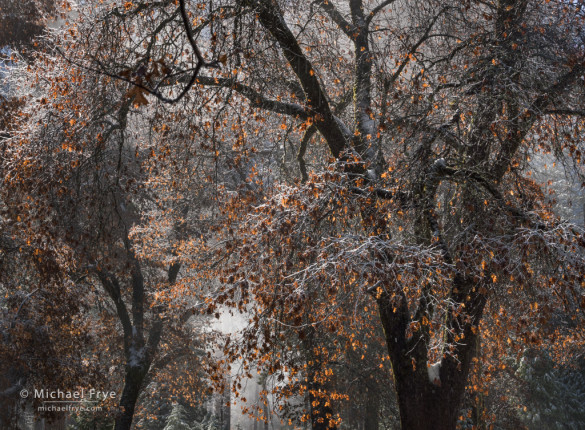