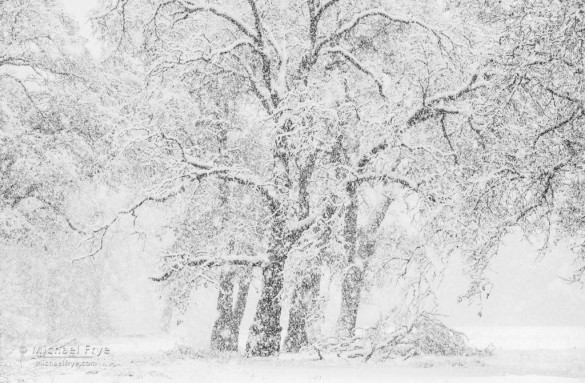 On Wednesday Claudia and I were in Yosemite Valley during a snowstorm. At times the snow was heavy, and wet, with big, fat flakes falling. It’s difficult to keep the camera dry and prevent water drops from getting on the lens under those conditions, but if you can manage that stuff you can find some beautiful scenes. The falling snow thickens the atmosphere, creating a fog-like effect, and the falling flakes themselves add to the snowy mood.

When it’s raining or snowing a lens hood is essential to keep water drops off the front glass. You also need to constantly check the front of the lens to make sure it’s clean, because it’s hard to see the drops through the viewfinder, but they become glaringly obvious later when looking at the images on a big screen, and are often impossible to clone out or otherwise fix. Telephoto lenses have longer hoods, which are better for keeping the front glass dry; all the photos here except one were made with my 70-200mm zoom.

There are many specialized camera rain covers on the market, but I often find them poorly designed and hard to use. I used an old gaiter to cover the camera for these images. A spare rain jacket also works well: you can put the hood over the camera, and tie the sleeves around the tripod underneath the head. A plastic bag will work in a pinch.

The snowflakes themselves will only show up against a dark background, so I looked for compositions with dark tree trunks, or in one case, the dark water of the Merced River. The shutter speed has a big effect on the appearance of the snowflakes. A fast shutter speed, like 1/125th of a second or higher, will freeze them and make them look like little dots. Slower shutter speeds turn them into streaks (around 1/15th of a second worked well on this day with little wind, but something around 1/30th to 1/60th might be better when the snow is blowing sideways). I tried a variety of shutter speeds for every composition, because it was hard to tell which I liked better at the time, and I wanted to have choices later. As you can see, in most cases I ended up liking the fast-shutter-speed pointillist effect better, but there were a few times when the softer, streaked look seemed to fit the image.

More distance between the camera and subject meant more snowflakes in between, and a softer, mistier appearance. If I was standing in the open there were snowflakes right in front of the lens, and with a fast shutter speed these became large, out-of-focus blobs. I usually liked the dalmatian-like appearance these created, but I found that if I stood underneath a tree canopy, where fewer flakes were falling, I could avoid those out-of-focus blobs, leaving only a pattern of small dots, as in the last image below.

Most of these photographs were obvious candidates for a black-and-white conversion, since there was little color. The snowy, misty scenes had a natural high-key look, so I kept that and even exaggerated it in processing the images, keeping them light but not washed out. I found that adjusting Clarity had a big effect on the look and feeling of the photographs. For images with fast shutter speeds, I often used a moderate to high amount of Clarity, which brought out the patterns of the polka-dot snowflakes. (That much Clarity makes most images look too harsh for my taste, but it worked for these super-soft photographs.) For images with slow shutter speeds I sometimes used a small amount of negative Clarity, which helped add to the soft, misty feeling.

My gloves eventually got soaked, and my hands started getting cold, so I packed it in, but despite being cold and wet I thoroughly enjoyed the day. It’s been awhile since I’d photographed during a snowstorm – after all, there haven’t been many snowstorms here over the last four years – and I’d forgotten how much fun it can be. I hope to get more chances soon.

P.S. As I said, it’s been awhile, but this isn’t the first time I’ve photographed trees during a snowstorm. You can see more examples here and here. And at the end, below, you’ll find a slow-motion video that Claudia made of me photographing in the snow. 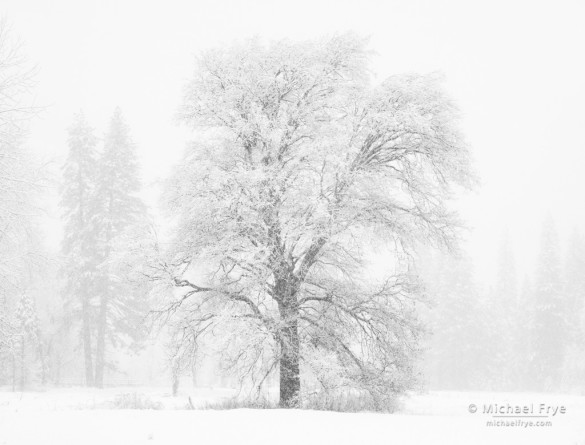 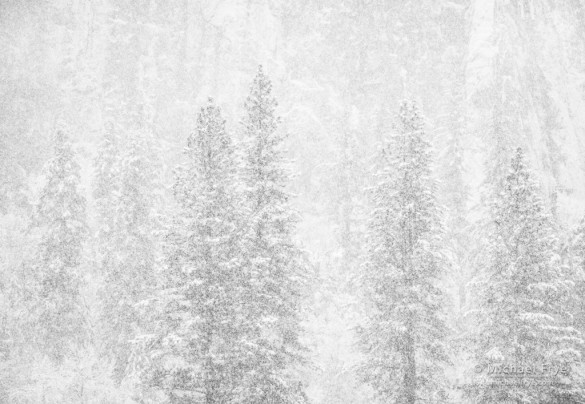 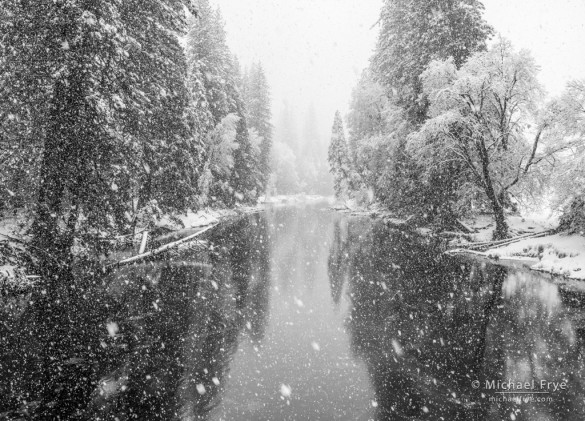 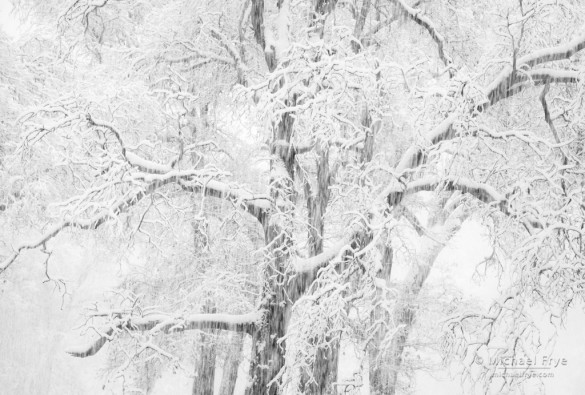 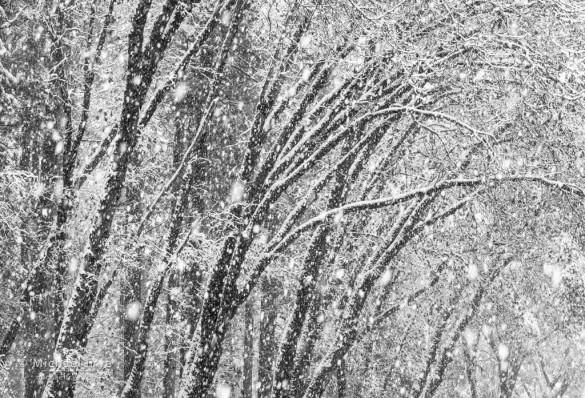 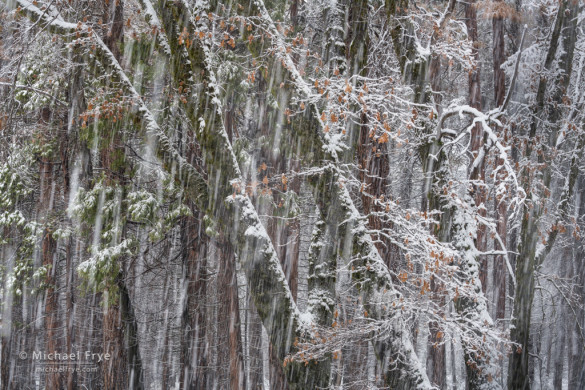 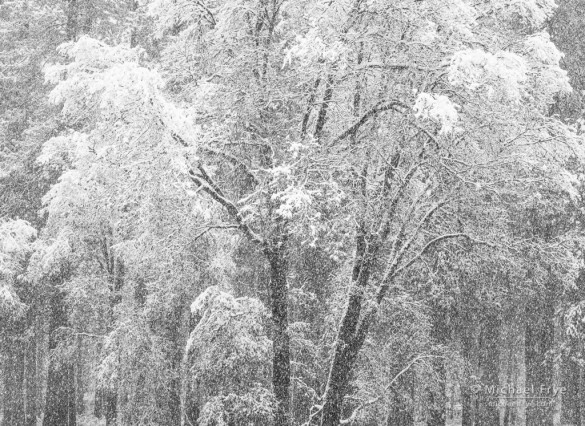 In the Snow from Michael Frye on Vimeo.