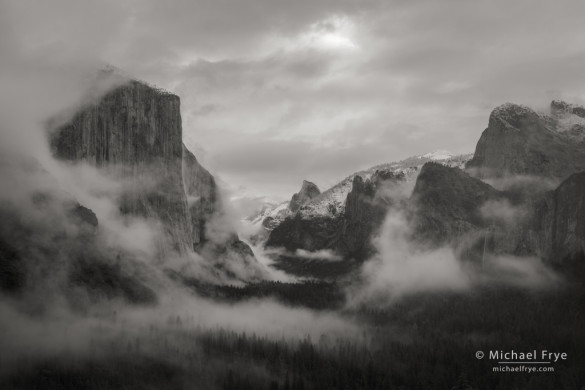 It’s nice to see the Yosemite high country covered in snow on the Sentinel Dome webcam – an uncommon sight in recent years. On Monday a large, winter-like storm reached California, dropping over two-and-a-half inches of rain in Yosemite Valley, and from one to two feet of snow at higher elevations. The winter wet season is off to a good start.

I’m not celebrating too much yet, however, because I remember this happening before. During the last four water-starved winters several large, early-season storms have created initial optimism, only to be followed by months of sunny skies. Let’s hope that this is just the first of many big storms to arrive this winter.

On Monday afternoon it looked like there was a small chance the storm might clear before sunset, so Claudia and I drove up to Yosemite Valley. Small chance indeed: it never stopped raining.

Tuesday morning seemed more promising, so we headed up to the valley again. Lingering clouds blocked the sun early, but abundant moisture created lots of beautiful mist, which looked great from Tunnel View. The sun started to break through around 8:00 a.m., so we headed down to the valley and photographed mist-shrouded El Capitan. We stayed in Yosemite Valley all day, and ended up at Tunnel View again late in the afternoon, where we found some beautiful cloud formations arching over El Capitan.

Our trips to the valley gave me a chance to check on the fall-color progress, and things were looking a bit better. We’re not going to see much color in the cottonwoods and oaks this year, but we saw many beautiful maples yesterday. A few of the maples have turned completely brown, and some have brown leaves mixed in with the yellow ones, but it looked like most of the leaves that had changed since my previous visit last Wednesday had turned yellow instead of brown. There are lots of yellow maples around Pohono Bridge, underneath Middle Cathedral Rock along Southside Drive, and west of Leidig Meadow on Northside Drive. I’ve included a maple photo here that I made in the rain on Monday afternoon, just to show that it’s possible to photograph fall color in Yosemite Valley now.

Many maple leaves were still green, so lets hope that those leaves turn yellow instead of brown. If they do, then we haven’t seen the best fall color in the valley quite yet. The dogwoods were still almost all green. I didn’t see a single dogwood in the valley that had completely turned color, although I saw many with a smattering of red or yellow leaves among the green ones. The dogwoods could also put on a good show eventually.

My theory about this weird autumn (a theory shared, at least in part, by G Dan Mitchell) is that if deciduous trees are stressed by the drought their leaves will turn brown and drop off early. That seems to have happened with all of the cottonwoods in Yosemite Valley, along with most of the oaks. We also saw that happen with some of the aspen groves on the east side. But if the trees are doing okay, and they’re not too stressed, our exceptionally warm autumn is causing them to turn late. This happened with most of the lower-elevation aspen groves on the east side, and seems to be happening with the maples and dogwoods in Yosemite Valley. So my guess – and please remember, it’s just a guess – is that trees that still have green leaves (like all of the Valley dogwoods, and many of the maples) are doing okay, and most of their leaves will turn color, rather than turn brown. It may just take awhile.

On the other hand, a hard freeze could make all the yellow leaves turn brown overnight, even on trees that aren’t stressed by the drought. The predicted low for Yosemite Valley last night was 22 degrees – yikes! The dogwoods and maples have waited so long to change color that they’ve run into a November cold snap. The still-green leaves may survive the freeze intact, but the yellow leaves are likely to turn brown and/or fall off quickly. We’ll see! 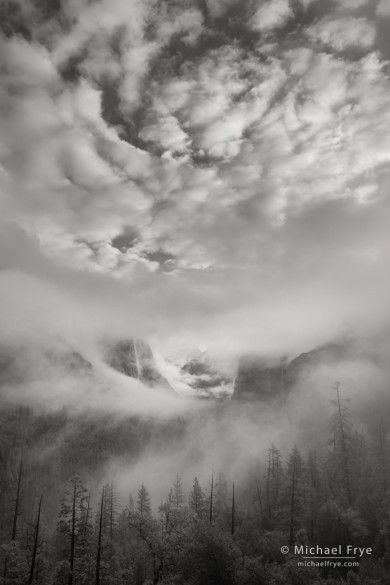 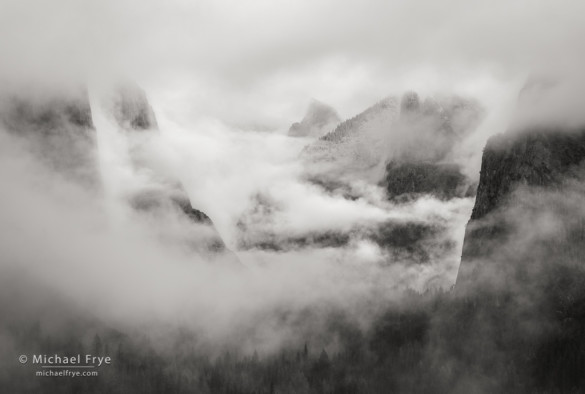 Half Dome through the mist from Tunnel View, Tuesday morning 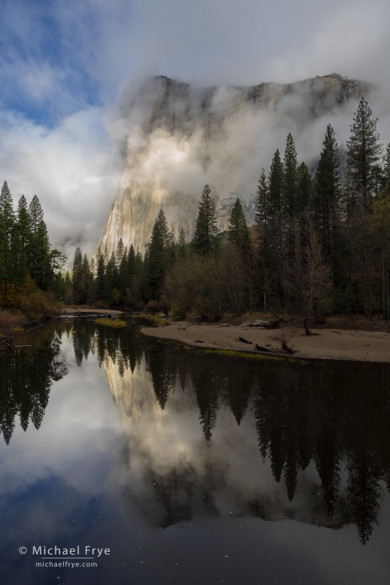 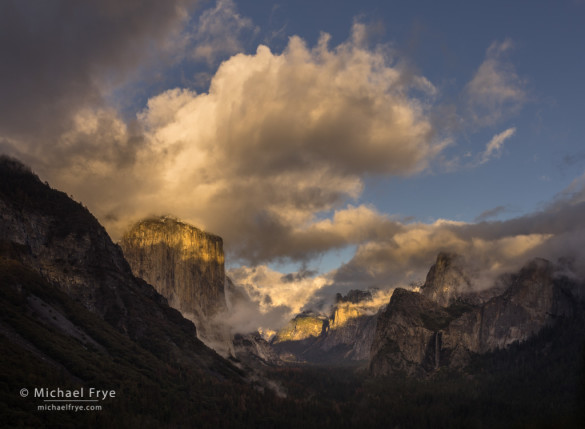 Clouds and mist at sunset from Tunnel View, Tuesday evening 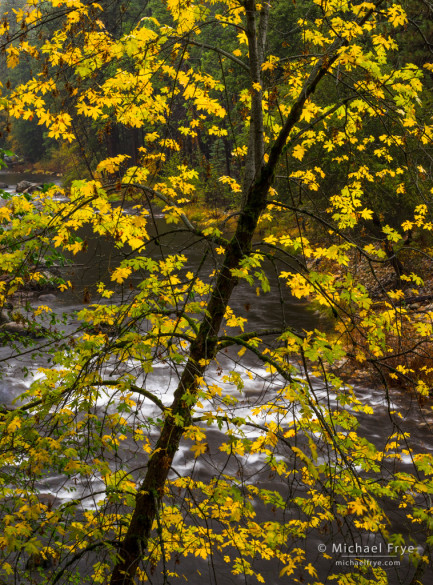