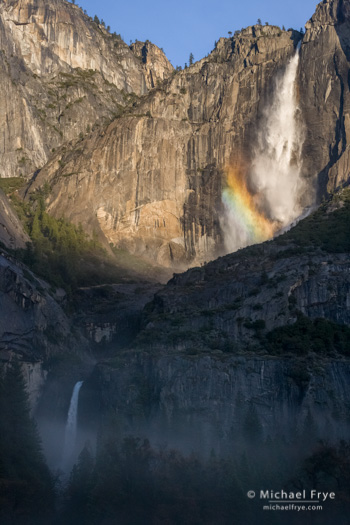 Upper and lower Yosemite Falls with a rainbow

For 20 years my wife Claudia and I lived in Yosemite Village, right underneath Yosemite Falls. In spring, when full from snowmelt, the roar from the fifth-highest waterfall in the world was the background music to our life in Yosemite Valley.

In late summer and autumn Yosemite Falls diminishes, sometimes dwindling to a wet stain on the cliff below Yosemite Point. This year it dried up even earlier than usual, a casualty of last winter’s meager snowfall.

But last week a series of warm, wet storms soaked northern California. Yosemite Valley received almost seven inches of rain between Wednesday morning and Sunday evening. Yesterday, after the storms finally departed, I drove up to Yosemite Valley, stepped out of my car at Swinging Bridge, and heard that familiar sound: the rumble of Yosemite Falls. It’s back, and so are all the other waterfalls in the Valley. It seemed more like May than December, except that the grasses were brown, and the trees were mostly bare with lingering splashes of fall color.

One of Yosemite’s photographic ironies is that in spring, when the thunder of Yosemite Falls rattles windows in Yosemite Village, the sun only hits the fall during the middle of the day. In winter the sun strikes the upper fall with beautiful, warm, low-angle light shortly after sunrise. You can even see rainbows from the right spot. But of course the flow is usually low during these colder months — except, that is, when heavy, warm rains fall, like they did last week.

I headed up to the valley early yesterday hoping to photograph that rainbow with springlike runoff in the fall. Some high clouds threatened to ruin the show, but the sun broke through at the right moment and the rainbow appeared on schedule amid the spray.

Even better, the ground and trees were so thoroughly soaked that low-lying mist covered the meadows, and when the sun hit a group of trees they would start steaming. I spent several hours happily photographing waterfalls, misty trees, swirling foam in the river, and some lingering fall color. Here are a few of my favorites from the morning.

As the runoff from the rains diminishes, and temperatures drop, the water levels will diminish, but we should have above-average flow all winter unless there’s a prolonged dry spell. Snow levels were between 8000 and 9000 feet during the recent storms, but the highest elevations must have received a lot of snow. Let’s hope we get more, and can listen to waterfalls roaring next spring. 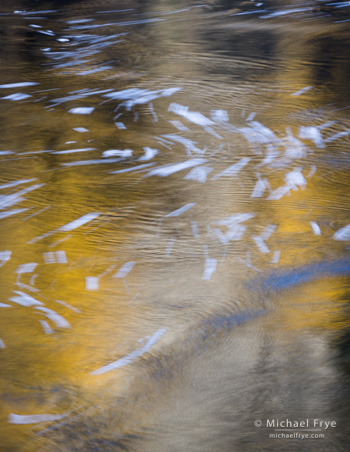 Foam and reflections in the Merced River 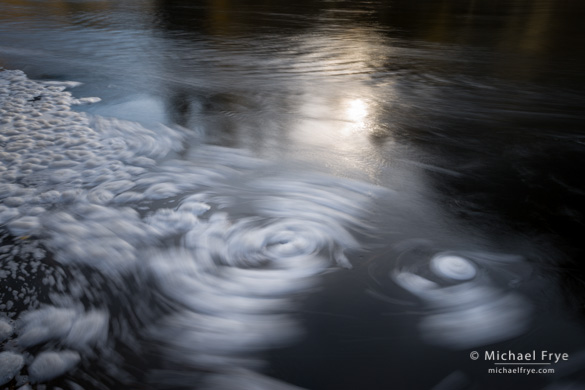 Swirling foam in the Merced River 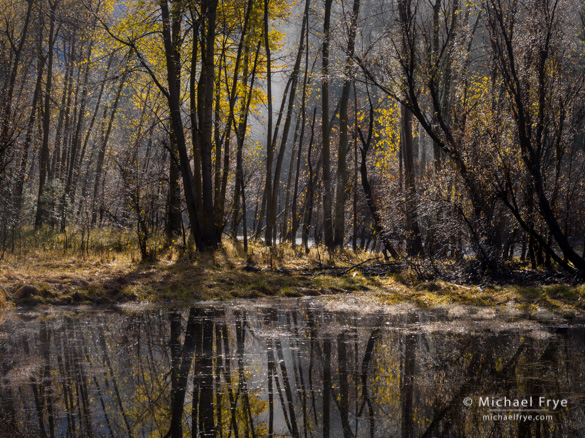 Cottonwoods reflected in a pond 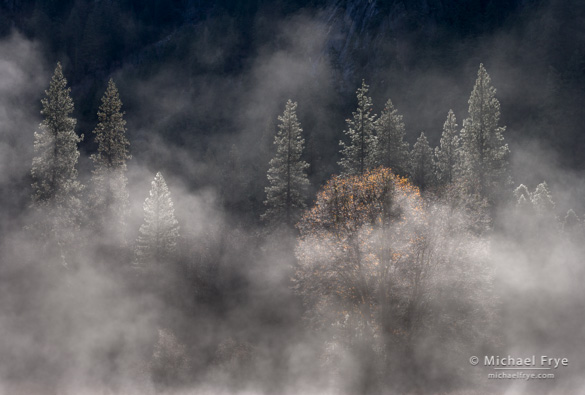 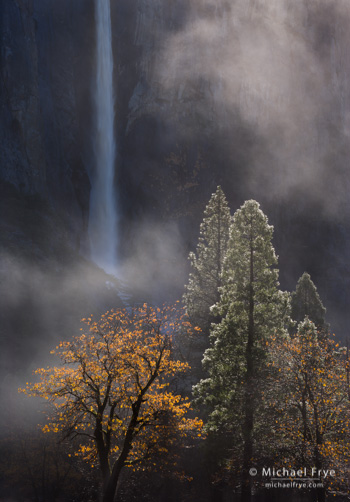 Related Posts: After the Storm, Is There Still Fall Color in Yosemite?; Early November Magic in Yosemite