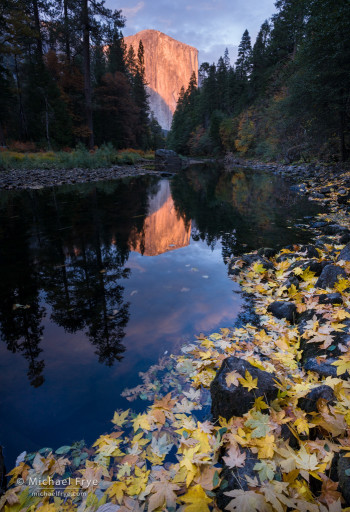 On my way home Thursday I drove the loop around Yosemite Valley to check on the fall color progression. The first thing that struck me was the cottonwoods, which have all dropped their leaves without turning yellow. Is this a sign of the drought? Maybe, but I saw the same thing happen in 2011, after one of the wettest winters and springs on record for Yosemite Valley. There are a lot of factors that affect fall color, so it’s hard to pinpoint one cause.

Some of the black oak leaves also seem to be turning brown. I’d say half of the oaks look fine (though still mostly green), and half appear to be wilting.

On the other hand, the big-leaf maples and dogwoods look pretty normal, though they’re turning late. Many maples sport a few brown leaves, but that’s actually pretty typical. The rest of the leaves are either healthy green or starting to turn yellow, and once they all turn yellow you won’t notice the brown leaves. Most of the dogwoods look quite normal overall, though they’re turning late.

Without color from the cottonwoods, and half of the oaks, it won’t be a top-tier fall in Yosemite Valley. But the maples and dogwoods are the most colorful autumn trees in Yosemite Valley, and could still put on a good show. If so, it will be a late one, as most of those trees are still green. The maples along Southside Drive underneath Middle Cathedral Rock (and directly across the Valley from El Capitan) are often the first trees to turn in the Valley, and they were only perhaps 30 percent yellow when I drove by on Thursday. It looks like we’re a good two weeks away from the best color. I’m sure I’ll be back in Yosemite Valley again soon, and I’ll let you know how things are progressing.