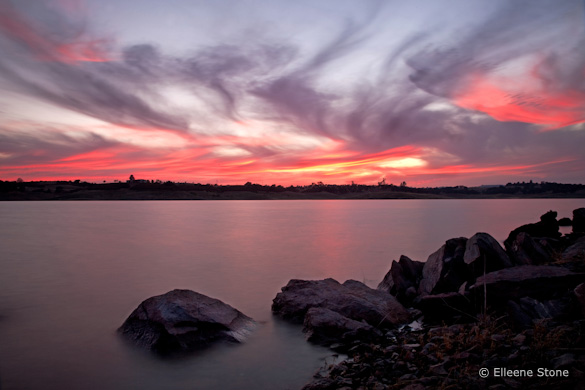 This week’s photograph was made by Ellie Stone at Lake New Hogan in Calaveras County, California. By having her image chosen for this critique Ellie will receive a free 16×20 matted print from Aspen Creek Photo. If you’d like your images considered for future critiques you can upload them to theFlickr group I created for this purpose.

We’ve all seen many sunset photos. For an image like this to grab out attention it either has to portray an exceptional sunset, or somehow integrate a less-than-exceptional sunset into an unusual and striking composition.

This image certainly captured a great sunset—the color is amazing, and the wavy, zig-zagging lines of the clouds create wonderful patterns. The scene has a powerful, end-of-the-day mood. Ellie used a 15-second shutter speed to blur the choppy water—a good decision, I think, as that smoothed out the waves and added an interesting, soft texture that contrasts with the hard-edged foreground rocks.

I’m not sure, however, about the decision to include those rocks in the first place. It’s often difficult to decide whether to include a foreground or not: Does the foreground add interest to the scene, or is it an unnecessary distraction? In this case I think the sunset sky and water are enough to hold our attention. The sky, especially, is exceptional, and to me should be the focus of the composition. The rocks don’t seem as interesting.

I know some books say that you should always include a foreground, middle ground, and background in landscape photographs, but I think that’s one of those arbitrary rules that should be ignored. It’s great to include all three, but only if each is adding something to the photograph. The world is infinitely varied, and no rule can encompass every situation. As Edward Weston said, “Pictures came first. Rules followed. No one ever became an artist by learning rules or keeping them.”

With that in mind, here’s a version where I’ve cropped out the foreground. The camera position forced me to eliminate most of the water along with the rocks, but since the sky is the most interesting thing in the scene, and should fill most of the frame anyway, I think the cropped version works pretty well.

Crop A, eliminating the rocks 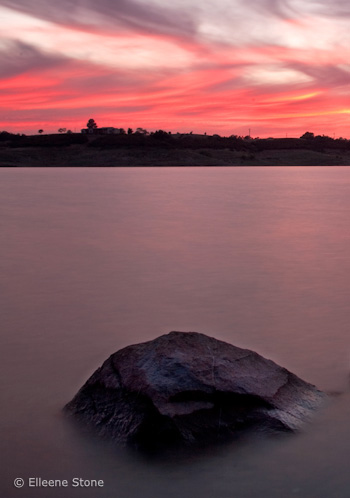 Of course if you can find a foreground that adds interest, and meshes with the background, by all means include it. While I don’t think the somewhat jumbled arrangement of rocks in the original version is appealing, there’s one, isolated rock on the left has a great shape, so I tried another crop which includes just that rock and a piece of sky. That works too: it’s simple, and the diamond shape of the rock echoes some of the diagonal lines of the clouds. But this composition emphasizes the foreground more than the sky, and with such a spectacular sunset I’m not sure that’s the right idea.

As always, I’m interested in hearing your thoughts on the foreground and the various crops presented here. Which version do you like best? Or is there some other framing that you think might be even better?

Technically this is well executed. If you’re going to include a foreground, then both foreground and background should be in focus! And they are here. The overall exposure looks right. Ellie said that she used a neutral-density filter to slow the shutter speed and blur the water’s motion, but wishes she had used a graduated filter to lighten the rocks relative to the foreground. Perhaps that might have helped, but with reflections you have to be careful not to lighten the foreground too much, as it looks unnatural when the water becomes lighter than the sky.

Despite my nitpicks about the foreground this is a very nice photograph, with great light, color, and mood, and with an effective use of a slow shutter speed to smooth the texture of the water.

Thanks Ellie for sharing your image! You can see more her work on Flickr (be sure to check out her amazing “Misty Bay Bridge” photo).

As part of being chosen for this week’s critique Ellie will receive a free 16×20 matted print courtesy of the folks at Aspen Creek Photo. If you’d like your images considered for future critiques, just upload them to the Flickr group I created for this purpose. If you’re not a Flickr member yet, joining is free and easy. You’ll have to read and accept the rules for the group before adding images, and please, no more than five photos per person per week. I’ll be posting the next critique in two weeks. Thanks for participating!