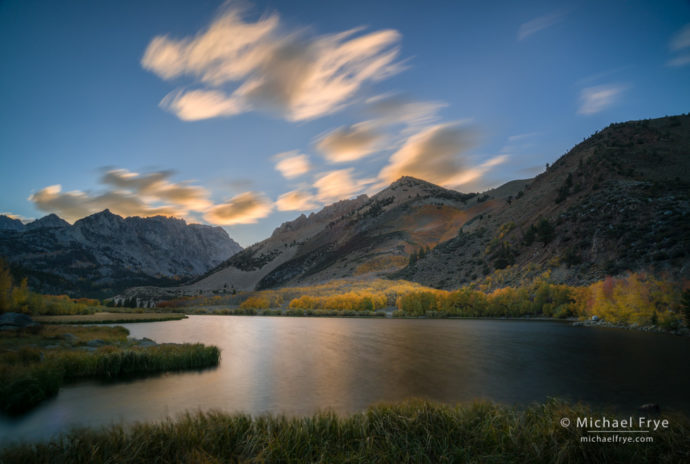 Claudia and I are back home, but we had fun photographing on the east side last week. Every day we saw more color in Bishop Creek Canyon, and the high-elevation aspens were looking great when we left yesterday.

I made this photograph Friday evening. We had been photographing intimate scenes along the south fork of Bishop Creek for a couple of hours, but there were some clouds hugging the crest of the mountains, so I headed to North Lake where I could get a wider view if the clouds turned color at sunset.

It was cold and windy at the lake. The choppy water ruined any possibility of reflections, so I decided to use a long exposure to smooth out the water. And since the clouds were moving quickly I thought I might as well try to blur the clouds too in order to give the image a softer, more ethereal look. So I put on a seven-stop neutral-density filter and a polarizer. This cut nine stops of light, and allowed me to get the shutter speed down to 30 seconds (at f/16 and 50 ISO) without overexposing the clouds.

With such long exposures bracketing was out of the question, so I had to expose for the highlights (the clouds) and try to lighten the foreground later in processing. As the temperature dropped the clouds gradually dissipated, but some of them hung around long enough to turn gold and then orange as the sun set. The clouds were racing across the frame, which made the timing challenging, as I had to anticipate where the clouds might move during a 30-second exposure.

On the back of the camera the foreground looked almost black. But I brought the image into Lightroom and used its wonderful Highlights and Shadows tools, along with the Exposure slider, to lighten the image overall, pull down the highlights, and bring out shadow detail. I also used the Adjustment Brush to further balance the light. Some darker areas of the photograph were brightened by almost three stops, which could bring out noise, but the Sony a7R II sensor handled this beautifully, and the shadows are virtually noise free.

The highest-elevation aspen groves are near peak in the eastern Sierra right now, but, as I said in my last post, the color should last several more weeks as it moves down the mountainsides. I’m looking forward to going back over the mountains again, but in the meantime I’ll work on processing the many photographs I made last week, and post some of them soon.