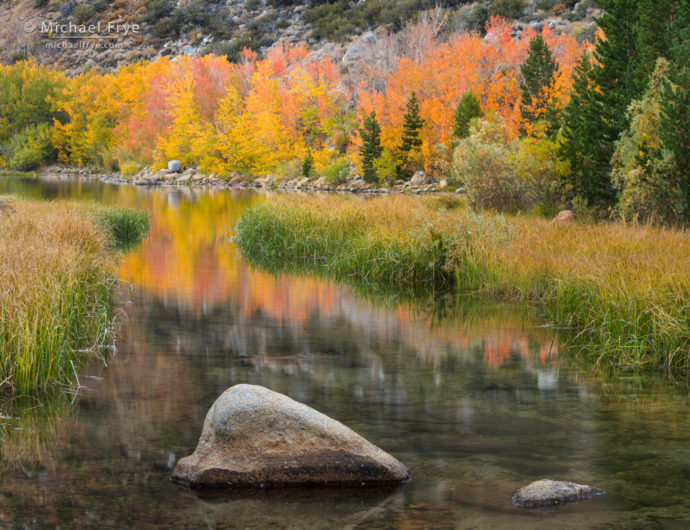 Claudia and I are over on the eastern side of the Sierra checking out the early fall color. The high-elevation aspens typically start turning over here in late September, and they’re right on schedule, or maybe even a little early compared to some years. We drove up Bishop Creek Canyon yesterday, and found lots of color near the 9,000-foot level around Lake Sabrina and North Lake. I’d say these areas are near peak already, with a few bare trees, and some green, but probably 70 to 80 percent of the aspens turning.

Although we haven’t been there yet, I would expect to find similar conditions along the road below South Lake, and in the upper reaches of Rock Creek Canyon. We saw some color at Warren Canyon (around the 9,000-foot level as you go down the east side of Tioga Pass), and spotted some yellow in the higher aspen groves of Parker Bench as we drove by, but those areas have a way to go.

Of course this is just the beginning of autumn over here. The color should move down the mountainsides over the next few weeks, typically reaching the middle-elevation groves during the first or second week of October, and arriving at the prime lower-elevation spots (including Convict Lake, the June Lake Loop, and Lee Vining Canyon) around the third week of October. After that the color display shifts to the western side of the mountains, where the typical peak for fall color in Yosemite Valley comes around the end of October or beginning of November.

It’s always exciting to see the first fall color. Each autumn seems to pass by quickly, but it’s such a beautiful season while it lasts!

P.S. I’ll keep you posted about what I see and hear during the coming weeks, but here are some additional resources to help you keep up with the latest fall-color developments in the eastern Sierra:

And also, if you’re hoping to photograph the eastern Sierra this fall, you should check out G Dan Mitchell’s book, California’s Fall Color: A Photographer’s Guide to Autumn in the Sierra. It’s full of great information about where and when to photograph the autumn foliage in California, and includes lots of Dan’s beautiful photographs for inspiration.