Winging It Through the Eclipse 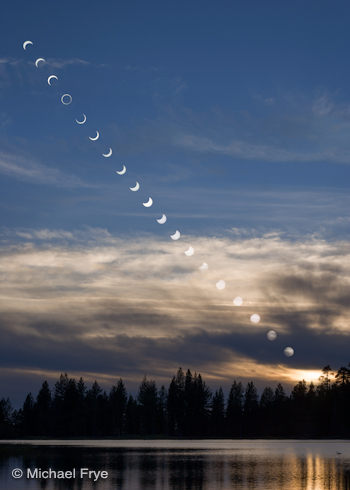 Right after the annular solar eclipse on May 20th I went to the Google+ Photographers Conference in San Francisco. This was a really fun event—more about that later. But I mention this because I got involved in the conference, and then had a computer problem, and didn’t have a chance to look at my eclipse photos, much less process them, until now. So here, finally, is a photograph showing an eclipse sequence.

I felt completely unprepared for this eclipse. I’ve never photographed a solar eclipse before, so I didn’t know what to expect. I didn’t have a solar filter, and I wasn’t sure whether I could even photograph the eclipse without one. I’d read some dire warnings that photographing the eclipse without a solar filter could ruin your camera’s sensor, but this didn’t make sense to me. I’ve included the sun in hundreds of photographs and never had a problem. Exposures are short, and when the shutter is closed the light bounces off the camera’s mirror, up through the prism, and out through the back of the viewfinder. Staring through the viewfinder at the sun is not a good idea, just as it’s not a good idea to stare directly at the sun. But we have a natural defense mechanism for this known as pain: it hurts to look at the sun.

END_OF_DOCUMENT_TOKEN_TO_BE_REPLACED 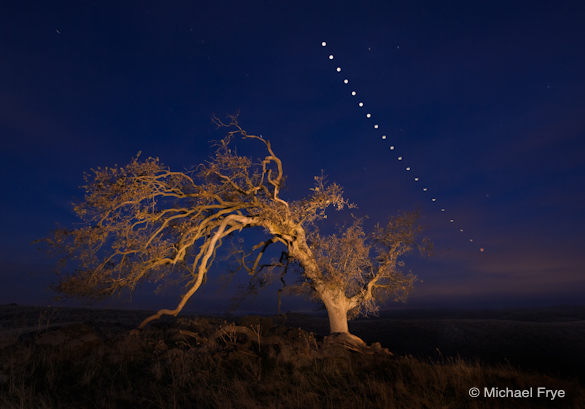 For me the hardest part about photographing last Saturday morning’s lunar eclipse was finding a good location. The fully-eclipsed moon would be close to the horizon in the west-northwest, so I needed a clear view in that direction, ideally with an interesting object in the foreground.

No place in Yosemite seemed to fit—too many mountains in the way. But I thought a remote region of western Mariposa County, with rolling hills and scattered oaks, might work. A week before the eclipse I scouted this area and found a photogenic oak tree on top of hill that seemed to line up with the projected path of the eclipse.

Friday night my student Erik and I got a couple hours of sleep, drove out to this spot, hiked up the hill, set up our cameras, and started our interval timers to capture a sequence of moon images ten minutes apart. We had a long wait, but it wasn’t too cold, and we enjoyed our peaceful, moonlit surroundings. A pair of great-horned owls serenaded us, and groups of coyotes howled at regular intervals. At one point Erik watched four coyotes climb a nearby moonlit hill, then saw one of them stop and howl.

END_OF_DOCUMENT_TOKEN_TO_BE_REPLACED 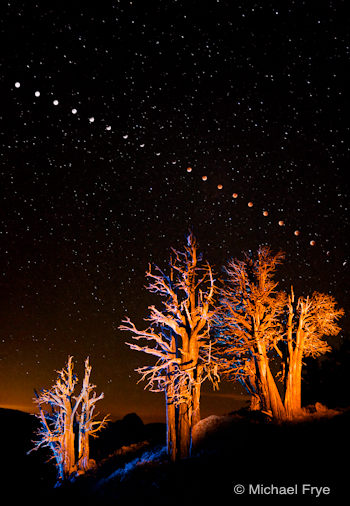 Before getting to the topic at hand, I want to let you know that eight people have signed up for the Eastern Sierra Fall Color Workshop since I announced it last Thursday. The limit is twelve students, and I’m sure it will fill up soon, so if you’re thinking about signing up don’t procrastinate!

If the weather cooperates, and you want to try make your own eclipse photographs, here are some tips. (I’ve copied some of this from my post a year ago, but the information about the moon position is all new.)

END_OF_DOCUMENT_TOKEN_TO_BE_REPLACED 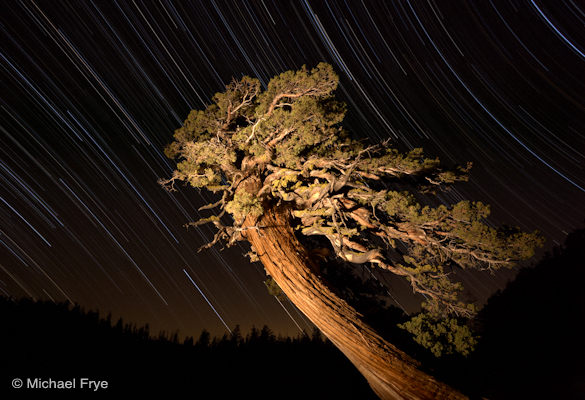 Here’s a new image, made last Tuesday evening near Olmsted Point in Yosemite. My friend Mike Osborne calls this the “Bowsprit” tree. What? I didn’t get it either until he explained that a bowsprit is the bent figure with arms splayed back at the bow of old sailing ships. Okay, yeah, this does sort of resemble that.

Anyway, I “painted” this wonderful tree with a flashlight, and used the image-stacking technique to get noise-free star trails. With image stacking the idea is to take a series of short exposures and blend them together, rather than doing one long one. The total exposure time here is about 90 minutes, but one exposure that long would end up being quite noisy. Instead I took 24 four-minute exposures, with only a one-second interval between them. So each of those four-minute exposures has little noise.

END_OF_DOCUMENT_TOKEN_TO_BE_REPLACED 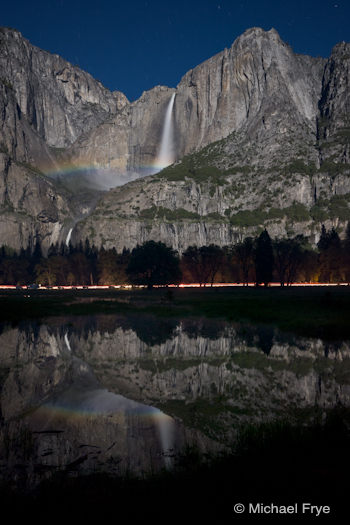 Lunar rainbow on Upper Yosemite Fall from Cook’s Meadow, May 2009

A full moon is coming up—Tuesday, May 17th, at 4:08 a.m. There should be plenty of spray in Yosemite Falls, so once again it should be possible to photograph a lunar rainbow, and I expect that many photographers will be in Yosemite trying to do just that. If you’re one of those people, last year I wrote some lunar rainbow photography tips that you might find helpful.

Here’s the third part of my video series on white balance, where I present solutions to a common problem in landscape photographs—finding the right white balance when mixing low-angle sunlight with blue sky.

If you haven’t seen them already, here are links to Part 1 and Part 2.

To see this video clearly, be sure that “HD” is on (the letters “HD” should be white instead of gray; if not, click on them), and click the “expand” icon just to the right of “HD.”

Hope you find this helpful; I look forward to hearing your comments! And if you like the video, please share the link.