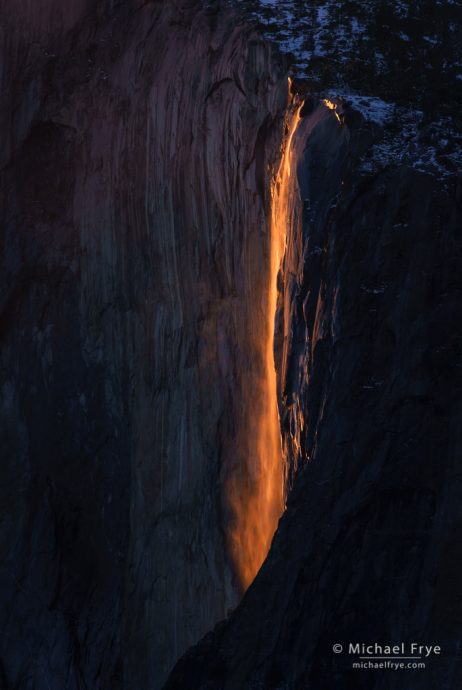 It looks like there should be plenty of water in Horsetail Fall this month. Yosemite Valley has received almost ten inches of rain over the past week, and that abundant rainfall has boosted the flow in all of Yosemite’s waterfalls, including Horsetail. In fact the Merced River reached minor flood stage Wednesday night. While the rain runoff will diminish quickly, there’s a healthy snowpack at the higher elevations of Yosemite, which should keep Horsetail flowing for awhile. I expect above-average flow in Horsetail this year.

END_OF_DOCUMENT_TOKEN_TO_BE_REPLACED 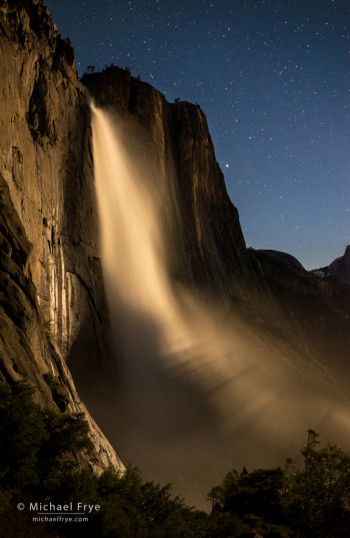 After photographing Horsetail Fall on Monday evening I was thinking about heading home, but it occurred to me that this might be the perfect night to make a photograph I had been thinking of, with Upper Yosemite Fall backlit by the rising moon. The moon was due to rise about 11:00 p.m. Consulting PhotoPills, it seemed like the angle and phase of the moon were about right. And with the waterfalls so full, plus cloud-free skies, it seemed unlikely that I’d ever find better conditions.

So I decided to go for it. I had dinner at the Food Court at Yosemite Lodge, then connected to the Lodge wi-fi and answered emails for awhile. About 8:30 I headed up the trail.

Hiking the Upper Yosemite Falls Trail in the dark was a strange, surreal experience. I’d been up this trail at night before, but under a full moon. Prior to the moonrise Monday night it was very dark, with the only light coming from the stars. I had to use my headlamp to negotiate the rocky trail, and the bright light ruined my night vision. When I came around the bend where you typically get your first view of the upper fall, I could hear it, and feel the spray, but couldn’t see it at all. I had to turn off my headlamp and let my eyes adjust for a minute, and then I could just make out a tall, skinny triangle of less-than-pure-blackness ahead of me – the waterfall.

I didn’t get as wet as expected going past the base of the fall; I’ve been soaked at this spot before, but the water level apparently wasn’t as high this time. But the waterfall was loud. I arrived at my spot early, and had time to try out different compositions before the moon rose.

END_OF_DOCUMENT_TOKEN_TO_BE_REPLACED 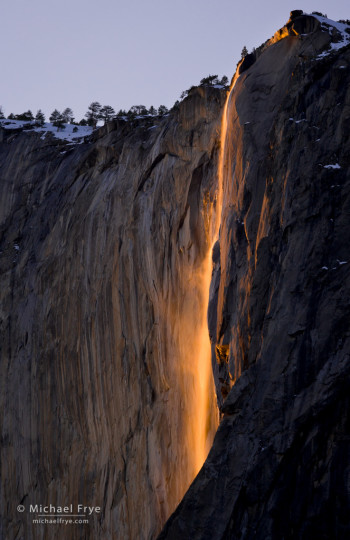 After a wet spell in December, the rain spigot got turned off. Yosemite Valley received seven one-hundredths of an inch of rain for the entire month of January. San Francisco set a record for January that can never be broken, with no measurable precipitation.

Not surprisingly, there isn’t much water in Horsetail Fall. In fact there’s no detectable flow at all – just a little dampness near the top. But forecasters are predicting a significant storm this weekend. They’re actually expecting two pulses, one tonight, and another on Sunday night. Total rainfall for the weekend could exceed four inches if the forecasts are right.

Horsetail should get a short-term boost from this storm. Whether that boost lasts longer depends on the exact snow level. Horsetail is fed by melting snow from a small drainage on top of El Capitan lying between 6,200 and 7,600 feet. The predictions for this storm put the snow level at 8,000 feet. If the actual snow levels are a little lower, and Horsetail’s tiny watershed gets some significant snow, then the runoff from that snow melting could last for a couple of weeks and provide at least some flow during the prime photography period later this month. If the snow levels are higher, and Horsetail’s drainage gets only rain, the water will run off quickly and won’t provide a lasting increase in the flow.

END_OF_DOCUMENT_TOKEN_TO_BE_REPLACED

Another Clearing Storm, and a Horsetail Fall Forecast 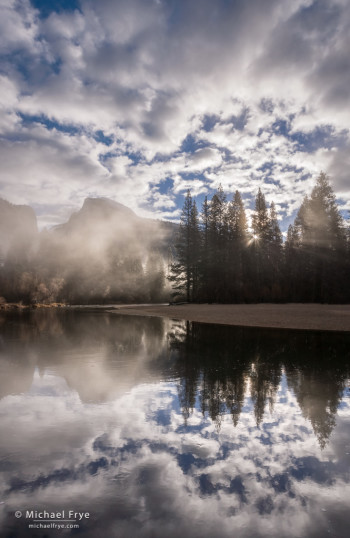 Northern California received some desperately-needed rain over the weekend. Most of that rain fell further north, so while Yosemite Valley got around 2.6 inches of rain, Blue Canyon, along Interstate 80 west of Lake Tahoe, got over 9 inches. But I’m not complaining. I’ll take whatever we can get, and those areas further north need the rain just as much as we do.

Like the last storm, this one also had a good sense of timing, clearing just before sunrise Monday morning. I rose early and photographed at several locations in Yosemite Valley, but my favorite image was this one of Half Dome from along the Merced River. I’ve posted other sunrise images from this spot before, but the cloud formations above Half Dome yesterday were exceptional.

The snow levels with this system were high, above 8,000 feet most of the time. I haven’t been able to find snow totals for Tuolumne Meadows, but Mammoth Mountain got two to three feet of snow, and Tuolumne probably got similar amounts.

The waterfalls in Yosemite Valley got a big boost from this storm. Their flow will diminish as the immediate runoff from the storm dissipates, but that new high-elevation snowpack will help feed the waterfalls for awhile, and we should see near-normal water flow for at least the next month or so.

END_OF_DOCUMENT_TOKEN_TO_BE_REPLACED

On Thursday evening I photographed Horestail Fall from near “Rowell’s View,” one of the small clearings east of the El Capitan picnic area. Two friends and I arrived about 4:30 and got the last two marginal parking spaces. There were easily 100 photographers in the vicinity, most set up right in the plowed parking area – not the best view in my opinion, as it’s too directly underneath the fall. But once we left the picnic area we were virtually alone.

On Wednesday morning Horsetail was a trickle, but two days of warm weather had increased the flow to perhaps average or slightly-below-average February levels. The light was slightly muted by some haze, but Horsetail still glowed nicely, as you can see by the photo at right. Last night was cloudy, tonight looks the same, and tomorrow and Monday the forecast calls for rain. So Thursday might have been the one good day for photographing Horsetail Fall this year! By Tuesday we are beyond the window for the best light, although it can still be good, especially if the sun breaks through some clouds at the right time.
But all the “bad” weather has done great things for the snowpack, and bodes well for waterfalls and flowers this spring. Keep it coming!