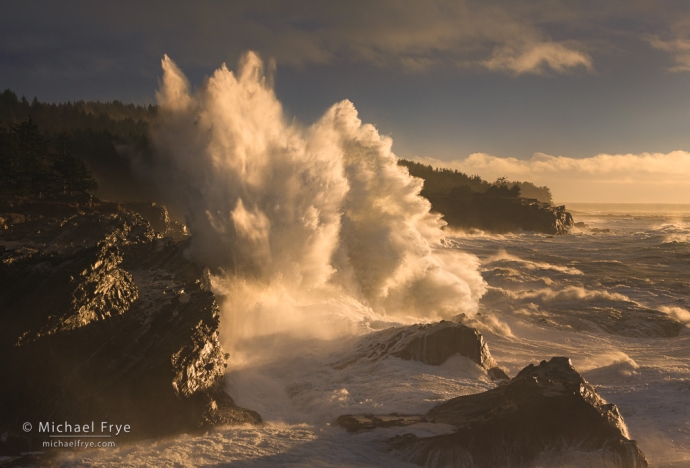 Crashing wave in late-afternoon light, Oregon coast. We had to deal with off-and-on rain while trying to photograph large waves crashing against the shore. But then the sun broke through for about five minutes late in the afternoon, bathing this scene in beautiful light. Luckily we caught a few big wave splashes during those five minutes. 70mm, 1/500 sec. at f/8, ISO 160.

After returning from New Zealand I made a trip to the Oregon Coast for our annual workshop. This part of the world is very different from my usual mountain haunts, which might be why I enjoy it so much. There’s a wild, rugged grandeur to this coastline, and if you’re lucky enough to encounter some big waves that just adds to the sense of awe.

And we did experience some big waves. Watching – and hearing – those monsters crash ashore was an experience none of us will soon forget. But even under calmer conditions this area offers wonderful opportunities to capture moody scenes of fog, or stormy skies.

And of course I love moody landscapes. If I can make a photograph that’s beautiful, or eye-catching, or contains a visual surprise, that’s great, but ideally I’d like to make images that convey a mood or feeling, and connect with the viewer on an emotional level. It’s hard to do that, so I don’t often succeed. But it’s rewarding when I capture something that conveys even a little bit of the feeling of being there.

Here’s a small selection of images from my recent trip to Oregon. I wasn’t looking for any particular mood with these, but just going with the flow, trying to capture whatever the mood was at that place and time. Sometimes that meant using a slow shutter speed, sometimes a fast shutter speed. Sometimes a telephoto lens seemed to tell the story best, sometimes a wider lens worked better. I adapted to whatever conditions presented themselves. I tried to be a conduit, and let nature speak through me, rather than looking for situations that fit a pre-conceived idea. 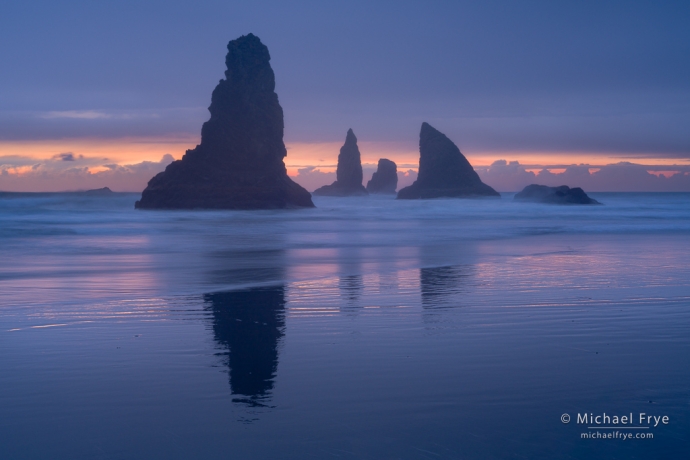 Sea stacks at sunset, Oregon Coast. On the last evening of our workshop the color lingered well after sunset. 50mm, 6 seconds at f/16, ISO 100. 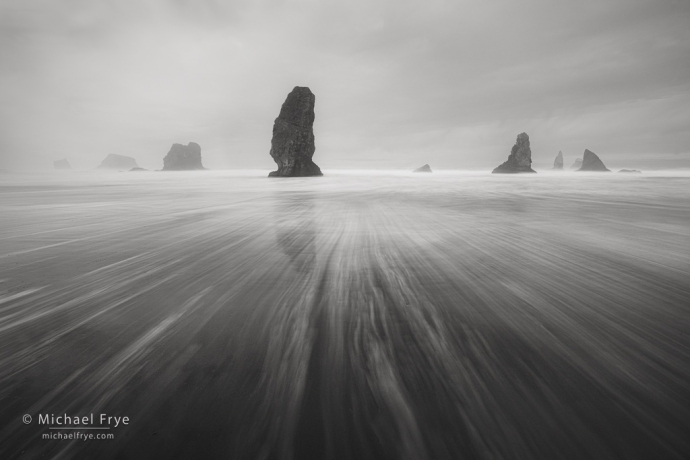 Sea stacks and receding wave, Oregon coast. I had to plant myself and my tripod firmly in the sand as the water swirled around me. Of course it took many attempts to catch the right wave. 16mm, 20 seconds at f/16, ISO 100, ND filter. 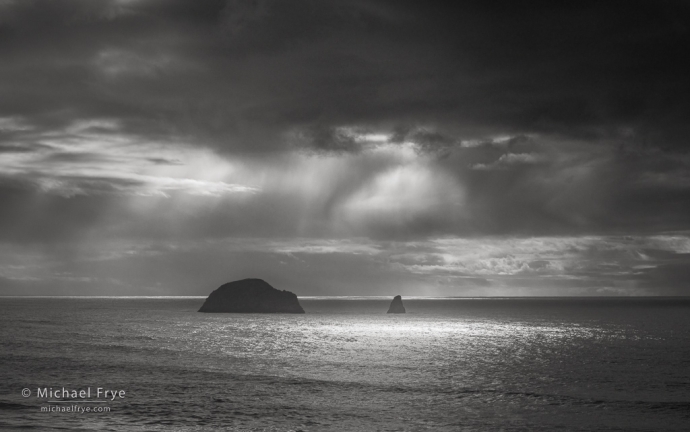 Sunlight and storm clouds, Oregon coast. While driving along the coast I saw sunlight breaking through the clouds and spotlighting the ocean, so I had to stop. 78mm, 1/2000 sec. at f/11, ISO 100. 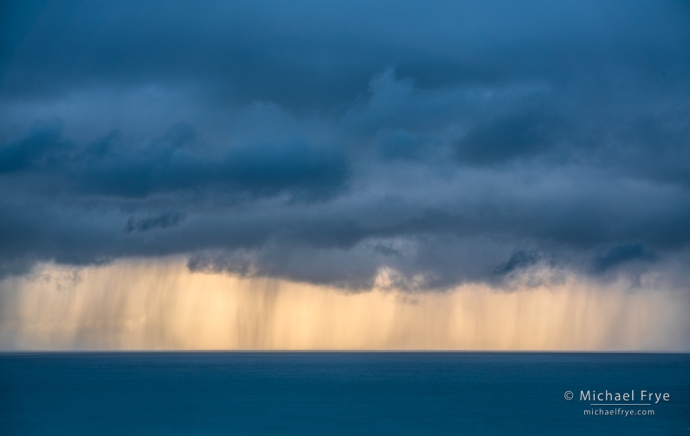 Rain squall over the Pacific Ocean, Oregon coast. While waiting, hoping the rain would pass through before sunset (see the last photo), I noticed this line of rain squalls with bright sky behind. 112mm, 1/10 sec. at f/11, ISO 100. 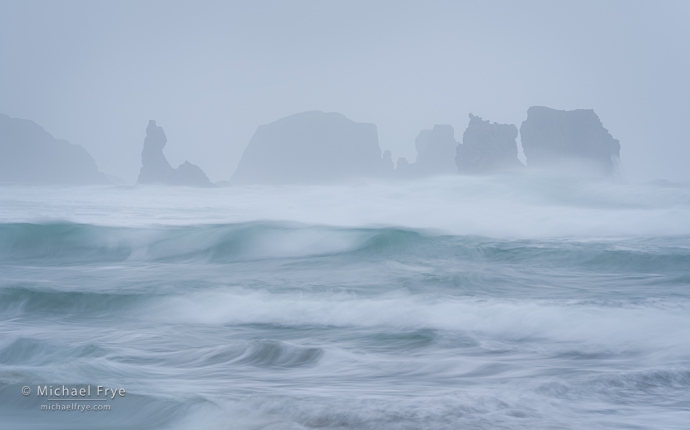 Sea stacks and waves in fog, Oregon coast. I liked this view looking across the waves toward some sea stacks – especially with fog. 192mm, 0.7 seconds at f/16, ISO 100, ND filter. 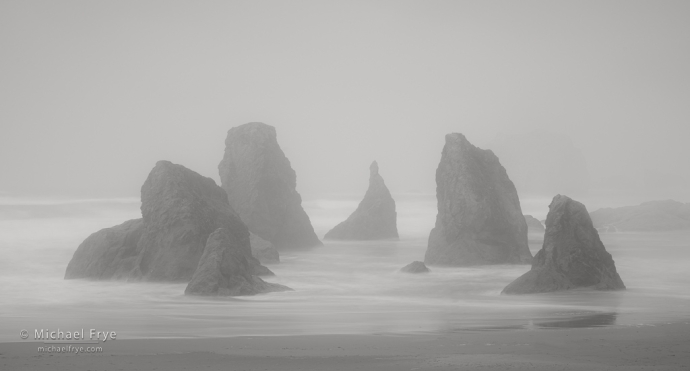 Sea stacks in fog, Oregon coast. Climbing a small bluff I found this nice arrangement of rocks, and the fog added an ethereal mood. 8 seconds at f/16, ISO 100, ND filter. 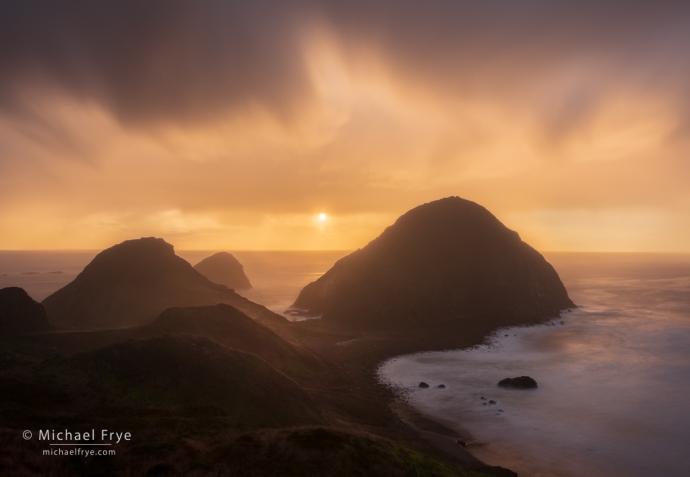 Sunset along the Oregon coast. It was still raining when the sun broke underneath the clouds and lit up this scene. Luckily the wind was at my back, so I could keep the front of the lens dry for this photo. Soon after taking this the wind shifted into my face and things became much more difficult. 26mm, five bracketed frames, two stops apart, each at f/11, ISO 100, with an ND filter. I blended the bracketed exposures with Lightroom’s HDR Merge.