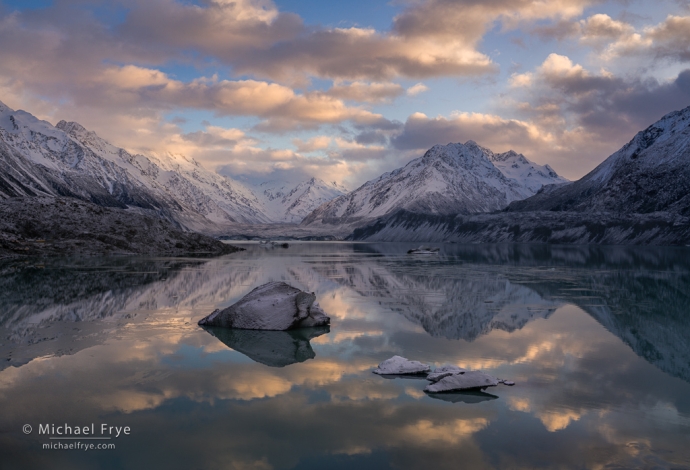 Sunrise at a glacial lake, New Zealand. It was a treat to photograph this glacial lake, complete with icebergs – something I don’t get to do in California! And with fresh snow to boot.

And to top if off (literally), there’s also a range of high, snowy mountains – the Southern Alps. These mountains aren’t terribly high compared to some other ranges. The tallest peak, Aoraki / Mt. Cook, is “only” 12,218 feet (3,724 meters) above sea level. Compare that to Mt. Whitney, in my home mountains, the Sierra Nevada, at 14,505 feet (4,421 meters) – the tallest peak in the contiguous United States (the “lower 48”).

And yet New Zealand’s Southern Alps are more alpine than any mountains in the contiguous U.S., with extensive glaciers and permanent snowfields. The largest glacier in New Zealand, the Tasman Glacier (which descends from the northern flanks of Aoraki / Mt. Cook), covers 39 square miles (101 square kilometers), while the largest glacier in the contiguous states, Emmons Glacier on Mt. Ranier in Washington, covers 4.3 square miles (11 square kilometers). The Tasman Glacier is actually larger than any glacier in the original Alps of Europe. And that’s only one of the South Island’s many glaciers. There are some 384 named glaciers on this small island, compared to around 354 named glaciers in all of the contiguous states.

New Zealand doesn’t have all this snow and ice because it’s particularly cold. That tallest peak, Aoraki / Mt. Cook, lies at a latitude of 43 degrees south, equivalent to southern Oregon. It’s a temperate climate, where it rarely snows at sea level.

But the mountains rise almost straight out of the ocean along the island’s west coast. Aoraki / Mt. Cook lies only 18 miles from the coast, forming one of the most abrupt transitions from sea to high mountains on the planet. That west coast of the South Island is very wet, with extensive temperate rain forests. When that moisture reaches the mountains it gets pushed up, causing rapid condensation, and creating even more precipitation. Annual precipitation can reach almost 600 inches per year along the crest – an enormous amount! When snow accumulates faster than it melts, its own weight compresses the snow into ice, and that weight causes the mass of ice to start sliding downhill – a glacier.

I love mountains, so I was quite taken with the Southern Alps and their snowy, alpine character, so different from the drier ranges of the western United States. I got to photograph a glacial lake, complete with icebergs that had calved off the glacier – not something you get to do in California. Before our workshop started I spent a few days around the lakes on the eastern side of the Alps, and got to experience a spring snowstorm. And over the next couple of weeks other storms added fresh dustings of snow to the mountains.

Of course the precipitation that creates those glaciers means that the mountains can disappear into clouds for long periods of time. But as we traveled around the island, guided by my co-instructor Phillip Bartlett, and accompanied by our wonderful group of participants in this Visionary Wild workshop, we continued to have great conditions. We were lucky to not only see these mountains, but to have some beautiful light and clouds at times. I posted one photo of Aoraki / Mt. Cook previously, but here are a few more images of these amazing mountains. 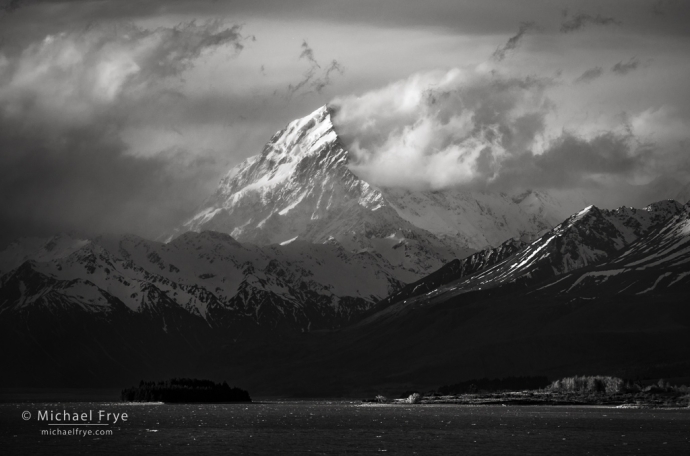 Aoraki (Mt. Cook) on a stormy afternoon, New Zealand. The native Maori word for this mountain, “Aoraki,” means “cloud piercer,” and it certainly lived up to that name this day. 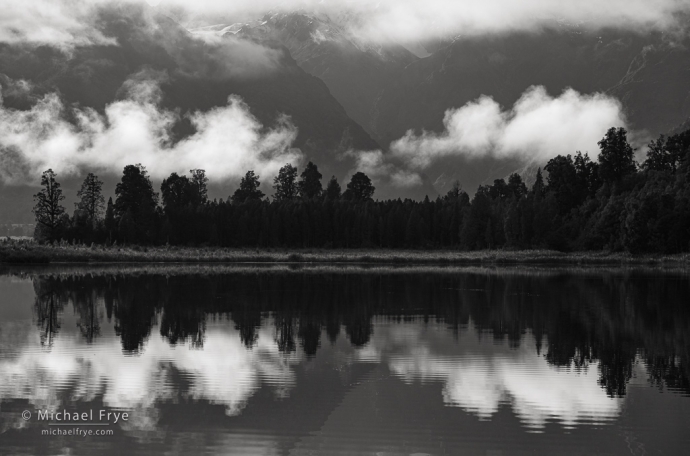 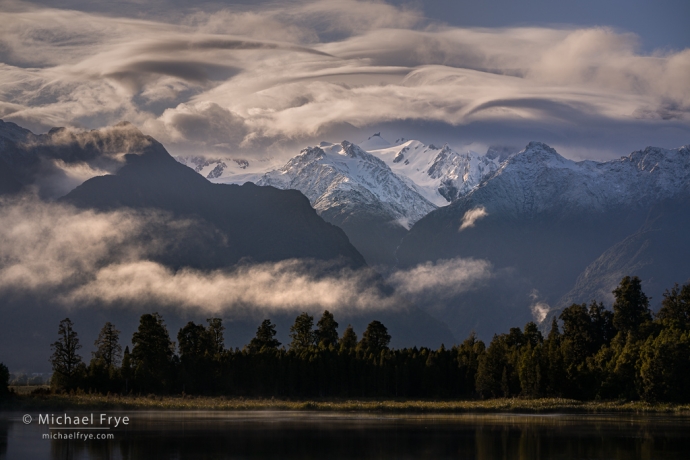 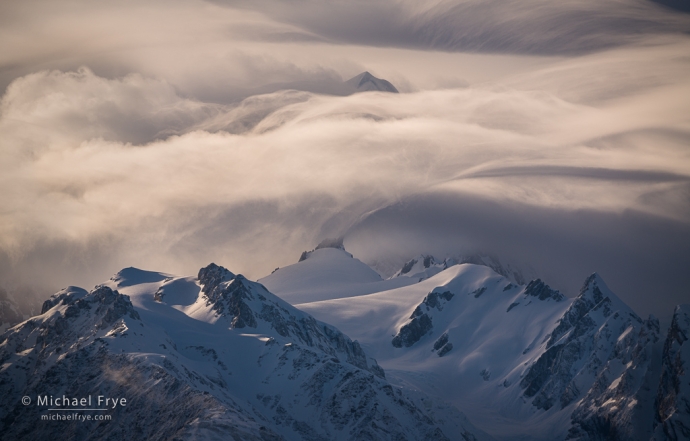 Cloud-draped mountains, New Zealand. A tighter view (at a different moment) of those wave clouds.