Into the High Sierra: A Memorable Morning

Morning rainbow over a high-country lake, Sierra Nevada, California. A stitched panorama captured the brief rainstorm and rainbow that appeared at this spectacular lake. (Unfortunately panoramas look rather small here on the blog, but you can click on the image to see it larger.)

A few days after the big deluge on our trip into the Sierra high country, the creek near our camp settled down enough to allow us to cross it, which opened up some new terrain to explore.

Claudia, Franka Gabler and I decided to get up early one morning and hike to a nearby lake for sunrise. The distance wasn’t far, but involved two creek crossings, plus a steep ascent. Sunrise would be just after 6:00 a.m., but we left at 4:30 to give ourselves plenty of time.

By this time we’d been without internet access for four days, which meant our last weather forecasts were out of date. We had to try to predict the weather the old-fashioned way: by looking at the sky and making a guess.

We didn’t see any clouds that morning initially, which was a little disappointing. On the hike up I spotted a few clouds off to the south – puffy clouds that I would expect to see in the afternoon, rather than the morning. Interesting.

We reached our sunrise destination. More puffy clouds appeared above the peaks, moving swiftly from south to north, or even southeast to northwest. I guessed that monsoonal moisture was getting pulled up from the south, but that usually means slower-moving clouds. (Later I learned that a low-pressure system off the coast of northern California was pulling up that monsoonal moisture. A large-scale low-pressure system like that is unusual in California in the summer, which explained the fast-moving clouds parading in from the southeast.)

The clouds disappeared, then reappeared at sunrise – good timing. Before sunrise I had time to scout a couple of different locations around the lakeshore, and settled on this spot, because I liked the rocks in the foreground: 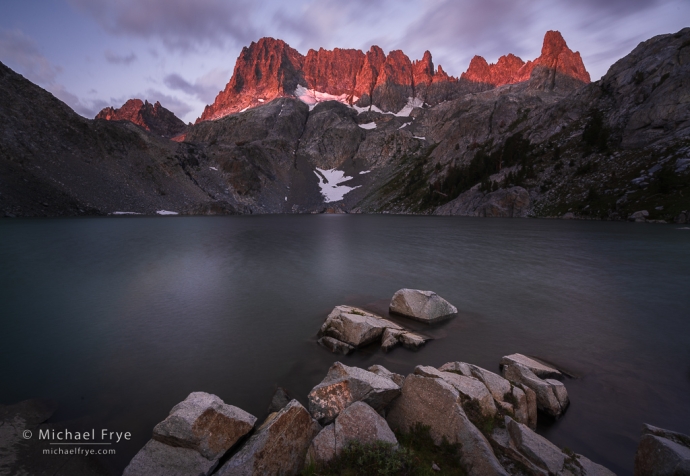 After awhile the clouds disappeared again, this time for good – or so it seemed.

Well okay, we had some nice light and clouds at sunrise. What more could you want?

I contemplated hiking up to another lake. I figured the best light was gone, so this would just be a scouting trip, but it was a lake I wanted to see. The problem was the “trail” to this lake traversed a steep talus slope. It wasn’t so much a trail as a route through the talus. From where I stood I could vaguely discern sections of the route, and it looked rough, but doable. I’ve hopped across many talus boulders and negotiated lots of rough mountain terrain in my younger days as a rock-climber and mountaineer (though that was a long time ago!). I decided to try it. Franka and Claudia declined to join me – understandably.

Negotiating the talus slope turned out to be about as difficult as I expected: challenging, but not overly so. I stopped a few times on the way up to take photos. Some clouds had reappeared, making me think I could see some nice dappled light. So maybe this wouldn’t be just a scouting trip.

When I reached the higher lake I saw that I needed to work my way around to the far side to get the best views. This lake was even rockier and more desolate than the previous one, so I would have to hop over talus boulders the whole way. Luckily most of these boulders were somewhat rounded (I’m not sure why), which made the going a bit easier. 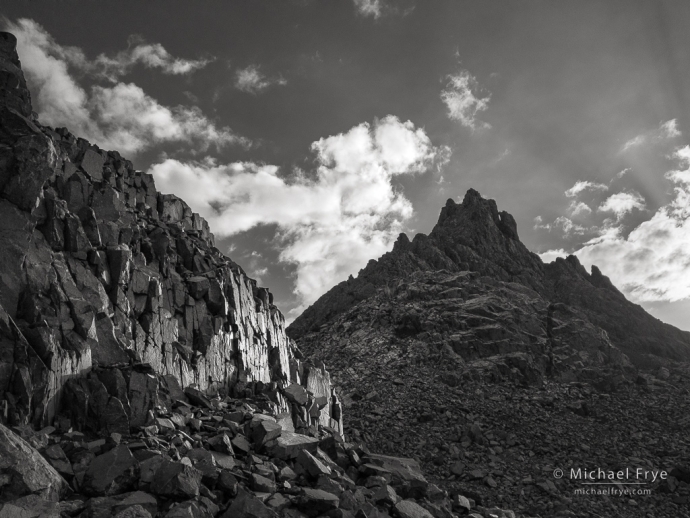 Rocky landscape, Sierra Nevada, California. I photographed this view while navigating the rocky shoreline around the upper lake.

About three-quarters of the way around the lake I reached a rock outcrop with a spectacular view toward an array of rocky peaks. My first thought was, “Wow, what a view!” And then immediately after that: “What a perfect spot for a panorama.”

I don’t make a lot of panoramas, but this was a no-brainer. Only a panorama could capture the sweeping view in front of me. The clouds were still there, casting beautiful, dappled light over the scene. No time to waste. So I set up my tripod, leveled it to make sure my panoramas would be straight, and captured one panorama sequence after another – right-to-left, left-to-right, and so on, as the light and shadows quickly changed in front of me. This is probably my favorite moment with that dappled light:

By this time it was after 8:00 a.m., about two hours after sunrise. I had expected this to be just a scouting trip, so I was happy to have some nice light to work with at this wonderful spot.

Then I felt a few raindrops. Soon it started to rain in earnest – not hard, but enough to make me concerned about getting water spots on my lens. And the sun was still out, which meant… yup, sure enough, there was a rainbow.

Seriously? A rainbow? At this place? Just randomly out of the blue on my first visit to this lake, when I had only expected to be scouting?

And where were the unicorns? Surely they had to be around somewhere…

I had a moment of panic. I knew the rainbow probably wouldn’t last long. Should I put on a polarizer – standard procedure for me with rainbows? Yup, I should. And I added a lens hood to help keep water drops off the front of the lens. Should I make a panorama, or just a single frame? I decided to start with a single horizontal frame, then capture a panorama if the rainbow lasted long enough.

I didn’t like the composition for my first single frame, so I tried another. Better. Okay, let’s try a panorama. I had to flip the camera vertically and readjust the polarizer. The wind was blowing the rain in from my left, so I captured the sequence from right-to-left, reasoning that the water drops would only get on the lens for the last frame or two of the sequence.

That seemed to work. I wiped the water drops off the lens and tried again, but by then the rainbow was already fading.

Whew. Did I get it? I looked back through my sequence, and it looked okay. I magnified some of the frames to make sure they were sharp. Thankfully they were. And I didn’t see any obvious spots from water drops on the lens. You never know exactly how a panorama will turn out until you stitch it together, but it looked like all the information was there. (It was, and I stitched the sequence together to make the image at the top of this post.)

I stayed at this spot for almost half an hour, hoping to see another rainbow, while capturing more panorama sequences with dappled light. I did see faint rainbows again, twice, but they were too faint. I finally decided to head back to camp for breakfast.

I got off course on my way back down the talus slope, which made the return trip longer and more tiring than necessary, but I made it safely. I found Franka photographing flowers below the first lake; it turned out she had also seen and photographed a rainbow from near there, which I was happy to hear.

I was pretty exhausted when I got back to camp, but happy. It had been a memorable morning.