A Night in the Alabama Hills

We had a lot of fun during our recent Inside Bodie and Starry Skies Adventure workshops. Both groups were great, and we really enjoyed being out under the stars and inside the amazing buildings at Bodie.

After the workshops Claudia and I decided to head down to the Alabama Hills. I’ve been wanting to do some night photography there, and the Perseid meteor shower was nearing its peak. This is typically one of the best meteor showers of the year, but this year was supposed to be exceptionally good, with up to 200 meteors per hour during the peak time early Friday morning.

But even with that many meteors you need some luck to capture a bright one in the frame. I guess luck was with me in the Alabama Hills, because just after 2:00 a.m. Thursday morning a bright fireball lit up the sky to the southwest. I knew it was in my picture somewhere, but upon reviewing the photo I realized the meteor was perfectly placed, right between the small arch and the Milky Way.

Of course I did everything I could to maximize the odds of catching a bright meteor in the frame, but still, that placement was an extraordinary stroke of luck. I was jumping up and down when I saw the image appear on my LCD screen.

One way of maximizing the odds was by taking a continuous series of exposures (at my standard Milky Way settings of 15 seconds, f/2.8, 6400 ISO). I set the camera to continuous shooting mode and locked open the shutter button on my cable release, so that one exposure immediately followed another. Essentially the shutter was open all the time, so that if any meteor appeared within the frame the camera would capture it. By the time that bright meteor appeared the camera had been running for a little more than 30 minutes with that same composition – not really that long. But it was late, and I had been debating how long to keep the camera going before going to bed. When that meteor appeared and I saw its placement in the frame there was no more debate, because there was no chance of catching a better one. So I stopped the sequence, then lit the underside of the arch in a separate frame. The image you see above is a blend of those two frames – one with the stars, Milky Way, and meteor, plus the silhouetted arch and mountains, while the other frame just added some light to the arch.

I also tried to increase the odds of capturing a bright meteor by pointing the camera away from the “radiant.” You always hear that you’re supposed to look toward the radiant of a meteor shower – the part of the sky the meteors are coming from. For the Perseid meteor shower the radiant is the constellation Perseus, in the northeast part of the sky. It’s true that you’ll see more meteors by looking toward the radiant. But over the years I’ve noticed that the brightest, longest meteors, the ones that elicit the most oohs and ahs, almost always appear in a different part of the sky. When you’re looking at the radiant the meteors are coming right at you, so their streaks are short. When you look away from the radiant the meteors are grazing across the sky, so their streaks are longer, and they’re often more spectacular. In the photograph above I was looking southwest, away from Perseus.

Of course which direction you point the camera depends on what you’re trying to do. In this case I was just hoping to catch one bright meteor in the frame. But I’ve seen some wonderful images (like this one from Rick Whitacre) where the photographer pointed the camera toward the radiant, made a long series of exposures over many hours, and then blended parts of those images together to show the radiating pattern of the meteors.

I made more images earlier that night in the Alabama Hills, and I’ve included a few of those below. It was a really fun evening in a beautiful spot, and I look forward to going back there soon.

P.S. On the next night we hiked up to an alpine lake in Yosemite, hoping to photograph more meteors; I’ll post some images from that journey soon. 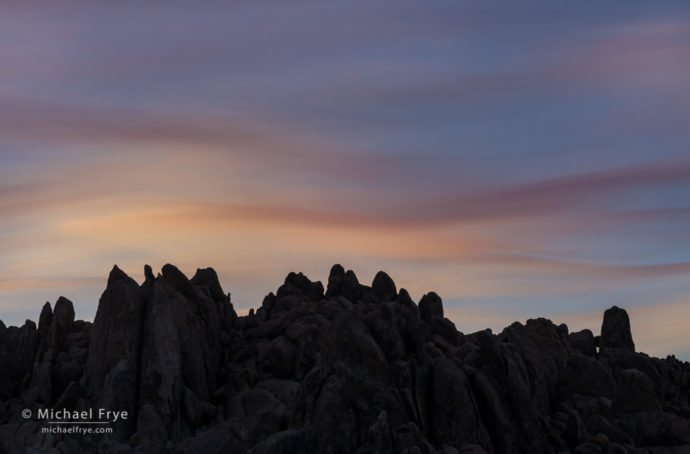 Smoke at sunset over the rocks of the Alabama Hills. A large swath of smoke from the Soberanes Fire in Big Sur drifted over the mountains just before sunset, forming these beautiful waves. Fortunately the skies cleared later that night. 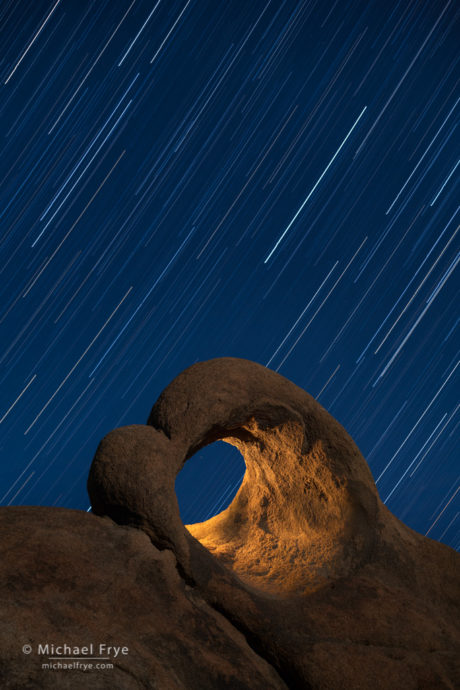 Star trails over an arch in the Alabama Hills, near Lone Pine, CA, USA 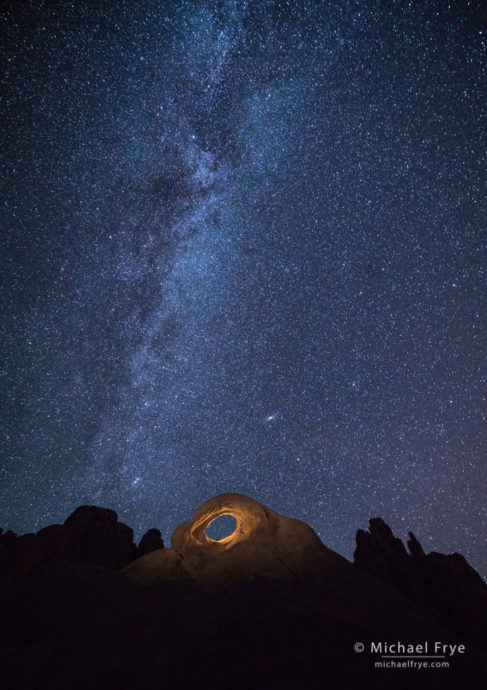 Milky Way over an arch in the Alabama Hills, near Lone Pine, CA, USA

Related Posts: Stars Over the Tuolumne River; Focusing in the Dark