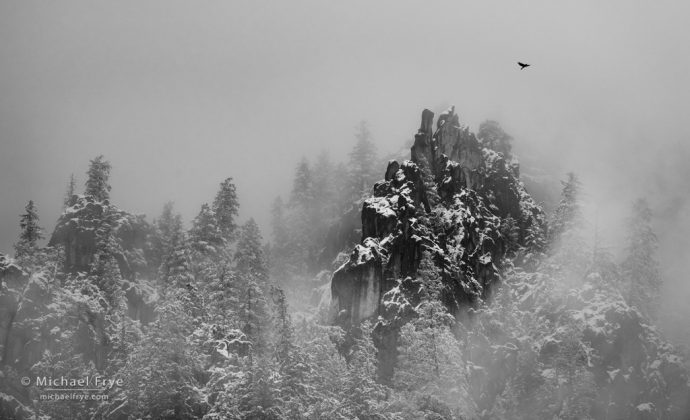 One of the most difficult tasks in landscape photography is deciding where to go. It seems simple, but it’s anything but, especially when the weather is changing quickly. Would I be better off staying put, or trying someplace else? Where (and when) will the light be most interesting?

It helps to know an area well, so you have a better idea about which spots might give you the best opportunities under different conditions. It also helps to know local weather patterns. And when cell service allows, I’ll use satellite, radar, and webcam images to see beyond my immediate field of view, and make a short-term weather prediction.

Thursday afternoon brought snow showers to the Sierra. I knew this kind of showery weather might include breaks where sunlight could filter through the clouds, and it also looked like skies might clear around sunset, so I thought it might be worth heading up to Yosemite Valley.

When I arrived it was snowing hard, but not really sticking. I got out my iPhone and captured a slow-motion video of the snowflakes:

I thought after taking some videos I might have time to make some still frames of snowflakes against trees, but it soon stopped snowing. So now what?

I looked at radar and satellite images on my phone, and could see that there might be a short-term break in the showers and clouds, but then more snow and clouds would be moving in from the east, probably blocking any chance of an interesting sunset. That wasn’t what I was hoping for, but at least I could try to plan around that.

First, I headed toward the west end of the valley, and caught a brief break in the clouds: 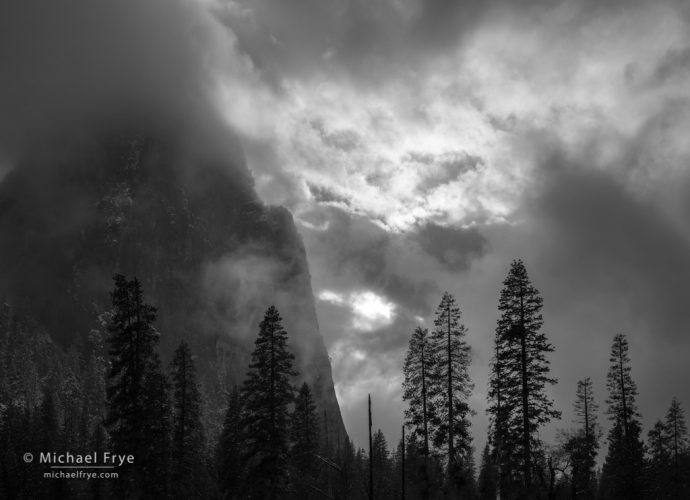 As the clouds closed in again, I hoped to encounter a heavier snow shower, so I could capture some of those falling flakes that I’d missed earlier. But that never happened.

At that point I was out of ideas – but that’s sometimes a good thing. In my recent pre-conference session for Out of Chicago Live I talked about planning and serendipity, and how I use both. Sometimes I carefully plan and execute a photograph. At other times I just go with the flow. And those occasions when I just follow my nose, without any particular plan, can often lead to interesting and unexpected photographs.

At those times I just roam around and respond to whatever catches my eye. On Thursday, after the clouds closed back in, there was lots of mist around the rim of the valley, so that caught my attention. I spotted some mist-shrouded trees and granite crags that looked interesting, so I stopped and got out my camera with a 100-400mm lens.

As I was photographing this scene a raven flew through the frame. My shutter speed was 1/15 sec., which wouldn’t work for flying birds, so I didn’t even try to capture this. But then I saw that the raven was circling around, and might come by again. So I quickly raised my shutter speed to 1/200 sec., pushed up the ISO to 400, and set my drive to continuous shooting. In a few seconds the raven flew through the frame again. This time I was ready, and mashed down the shutter button, capturing a series of images, including the one at the top of this post.

After that bit of serendipity I drove toward the west end of the valley again, and stopped when something else caught my eye: Cathedral Spires shrouded in mist: 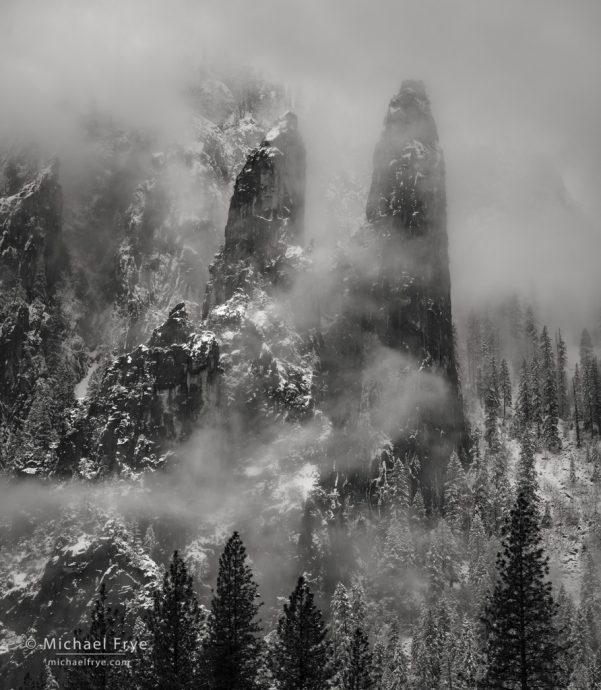 And then I continued to photograph misty crags until it got too dark.

I never saw the kind of spectacular light that would enhance one of the classic Yosemite views, but I had fun just photographing whatever caught my eye. Capturing the raven was totally unexpected, but those serendipitous moments are most likely to happen when you let go of your plans and follow your instincts. 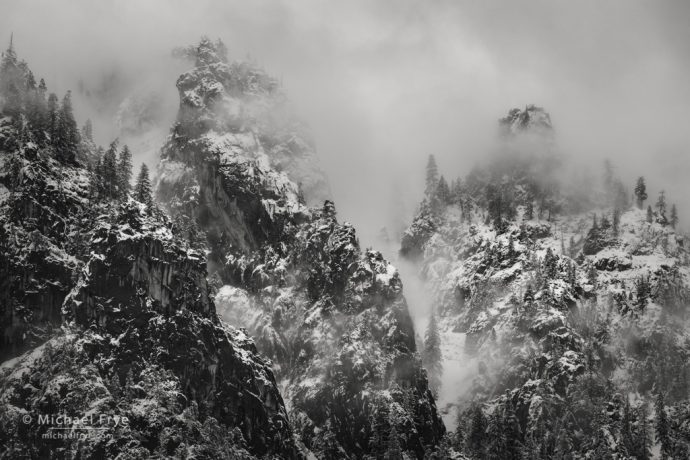